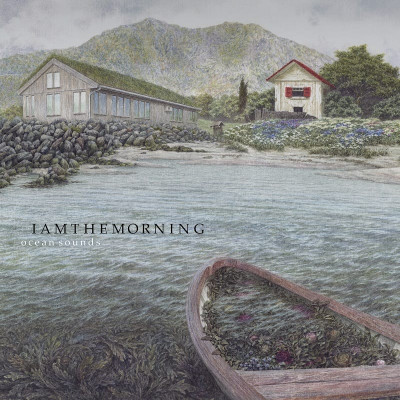 Russian-based duo Iamthemorning have made a sizeable impression with their studio releases, most particularly their most recent album, Lighthouse – a powerfully emotive study of mental illness. However, there is another, less well-explored facet to their output. The comparative scarcity of their live performances, and the complexities of their sound, has made live recordings of their music alluring in their own right. From The House Of Arts – a recording of their launch show for their 2014 album Belighted, the album that really brought them to a wider audience – was released in 2015 to great acclaim, but what was really enticing to aficionados was the idea of a concert film. With Ocean Sounds, Iamthemorning have provided the faithful with the band’s first audiovisual release – but in Iamthemorning’s inimitable style, Ocean Sounds toys with expectations to deliver something rather different.

Filmed in and around the titular recording studio, sited on a remote Norwegian island, Ocean Sounds is not a traditional live release. For one thing, there’s no audience; unless you count Vlad Avy, the patient engineer who ensured it was all captured for posterity. Instead, cameras capture Iamthemorning’s gigging line-up playing a selection from the band’s back catalogue in the Ocean Sounds live room. What’s really special about the film is the way that it captures far more than just the music.

Iamthemorning’s live line-up sees keyboardist Gleb and vocalist Marjana augmented by four musicians: violin, cello, bass and drums. Pleasingly, all of the musicians get their fair share of screen time. Drummer Evan Carson is especially watchable, demonstrating a welcome economy and a fine sense of space that is a perfect fit for Iamthemorning’s material. Bassist Joshua Franklin provides the bedrock for the band’s more powerful material, notably the decidedly progressive leanings of ‘K.O.S.’, whilst string players Karl Pestka (violin) and Guillaume Lagravière (cello) add fine playing and a great deal of extra colour throughout. If this sounds like it should feel sparse, it’s anything but: the unrestrained power of songs like ‘K.O.S.’ and ‘Chalk & Coal’ is thrilling, and it often feels like there are far more than six musicians playing. At the same time, the arrangements are uncluttered and an excellent showcase for the two principals. Kolyadin’s playing is often intense and complex, his fingers a blur of melody and counter-melody, yet it feels effortless. Semkina, by contrast, makes an intense and energized figure; eyes often closed, gesticulating unconsciously to the camera, lost in her performance. The Lighthouse material presented here is especially dramatic and atmospheric, with a heart-shattering ‘Sleeping Pills’ a particular highlight.

Like Iamthemorning’s music, the film is unfussy yet filled with wonderful small details. There’s no restless editing here; instead we are treated to lingering shots of the players as they perform. As well as every small nuance of the music, the camera picks up tiny details that flashier footage might omit. Whether it’s the Ocean Sounds logo on a recording device, a fleeting expression on someone’s face, or flickering readouts in the control room, it seems nothing is too small to be captured for posterity. It lends the film an unhurried, relaxed feel that lulls even the most impatient viewer into a suitably receptive frame of mind.

At the beginning of the film, and at occasional intervals between the tracks, there are brief montages of footage showing the musicians when they’re not performing, and it is these glimpses of the band members at play and at repose that are in many ways the most intriguing. Iamthemorning’s material is legendarily intense, focused on loss, death, mental illness and deep, dark emotions, so it is perhaps not surprising that many view Kolyadin and Semkina with a gothic awe. Here, however, we see Kolyadin gleefully trading licks with the others; Semkina pulling faces and mock-scratching, cat-like, at a studio window; and both musicians chuckling at in-jokes and with their comrades. During fan favourite ‘5/4’, Semkina playfully reproduces the clap-along interaction the band typically enjoy with fans, to the evident amusement of all present. Elsewhere, Kolyadin experiments with a keyboard part as a thoughtful Semkina looks on; the duo then break into amused laughter – a brief but sweet glance at Iamthemorning’s creative process that is instantly endearing.

There is another character in the film that has not yet been mentioned, however, and that is Ocean Sounds itself. The studio, perched on a rocky spar right by the ocean, is mind-blowingly picturesque. The film realises this and makes the most of the location. The sky is rarely out of shot, and whether bathed in bright sunshine, vibrant in the glow of a spectacular sunset, or silhouetted by the evening sky as the light fades, the studio seems a truly otherwordly place, a suitable portal to the enjoyably dreamlike world that Iamthemorning’s material inhabits. One lingering shot of the waves lapping up onto the beach nearby as the glowing coal of the sun slides behind the clouds into the sea, is staggeringly beautiful. As the camera rises, spiralling, into the air above the studio as the credits roll, the viewer is left with the feeling that they’ve enjoyed a holiday from the world. Iamthemorning’s music is powerfully evocative in its own right; married to this location, and this unhurried, unpretentious way of recording, that sense is magnified.

Perhaps the ultimate treat for committed fans, however, follows the credits. We are whisked back into the studio to watch, spellbound, as Kolyadin and Semkina summon up a new song, ‘Blue Sea’. They perform it acoustically, as a duo: Kolyadin thoughtful at the piano, Semkina crosslegged on the floor, cradling an acoustic guitar, her highly emotive voice weaving its now-familiar spell. It is, not to put too fine a point on it, magical, and augurs very well indeed for the duo’s next record. It also demonstrates that the duo are committed to moving forwards and exploring new spaces, however entertaining Ocean Sounds‘ voyage through their back catalogue may be.

Ocean Sounds, then, is everything that fans might have hoped for, and whole lot more besides. It seems only fitting that Iamthemorning eschew sweaty clubs or grandiose halls and find a location so suited to their sonic universe. A stunning showcase for some of the band’s best material to date, it’s also richly atmospheric, surprisingly involving, and a visual feast in its own right. Quite simply, a sensational piece of work.