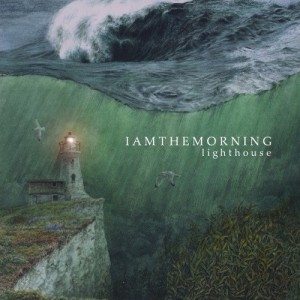 Russian duo Iamthemorning’s second album Belighted was one of the most pleasant surprises of 2014. Their first album, the concisely-titled ~, mixed chamber music with the adventurous spirit of the best progressive rock whilst not losing sight of the most crucial element: memorable hooks and a fine sense of melody. Belighted – their first record for much-loved British label Kscope – went several steps further, simultaneously dialling up both the prog and the chamber music aspects to stunning effect, and vocalist Marjana Semkina and pianist Gleb Kolyadin found themselves with a palpable breakthrough album on their hands.

Lighthouse is the duo’s third full-length album. This time out, the duo have elected to create a fully conceptual record, based around the story of their protagonist, who is struggling with an unspecified mental illness. The album, like the duo’s previous fare, is possessed of an eerie beauty, an uneasy poignancy; but here the intensity is increased substantially. Given the freedom of a full album’s length to write about the protagonists struggle, Semkina and Kolyadin have excelled themselves, creating an extraordinarily powerful record. In more than one sense, it is perhaps the equally dark sibling of Marillion’s Brave, another conceptual record that examined the psychological trauma of a teenage girl, abused by her stepfather and left to develop her own mental defences against a cruel and unfeeling world. Both records share a sense of foreboding, a sense of an oncoming tidal wave that spells doom for their central character – indeed the landscape depicted on the beautifully rendered sleeve of Lighthouse is already fathoms below the surface. Neither album is satisfied with handing down a simple, feel-good ending, and in some ways this may be one of the most polarising things about Lighthouse, as proved to be the case with Brave. Listeners who crave resolution and happily-ever-afters are going to find the introspective, unflinching approach of Lighthouse difficult to deal with. On the flipside, that same unflinching approach makes Lighthouse one of the most emotionally satisfying and powerfully moving albums that the committed are likely to experience.

The more overt progressive rock influences of Belighted have been scaled back somewhat, but this is in service to the material: the duo’s chamber music oriented sound is ideally suited to the narrative. Semkina’s sweeping vocals, beautiful and desolate by turns, deservedly take centre stage, but the real beauty of this record lies in the way in which Semkina’s extraordinary vocals are paired with other instruments, often in stark duets, creating a deeply involving and unsettlingly intimate environment that serves the material to perfection.

Opening with the sound of rolling waves, ‘I Came Before The Water (Part 1)’ sets the scene for this voyage of self-examination perfectly, Semkina’s ghostly vocal the sound of a soul in turmoil. Iamthemorning know the value of brevity, and this opening salvo is under two minutes in length and all the more powerful for it. ‘I Came Before The Water (Part 2)’ appears as the penultimate track, and the material between the bookends formed by these tracks tells the story of how we arrived at this moment. The growing realisation by the protagonist that there is something wrong with the way they view the world is replaced by a determination to fight back, to try and control or reverse their mental illness, and there is a thrilling contrast between the chilling despair at each new setback, the serenity of acceptance, and the fierce determination with each resolution not to let the disease win, that colours each track.

Despite the grim subject matter, Iamthemorning never let the mood slip into a monochrome musical coma. As with life, there is colour and beauty here; joy and a sense of adventure despite the ominous shroud of oncoming darkness. The very nature of the album celebrates life and the human condition, whilst accepting that all things must end. It’s certainly not the first record to address such basic human concerns, but it’s very rare that these ultimate truths are handled with such a deft hand and with this kind of emotional depth. So for each chillingly bleak section, we’re provided with contrasts, such as the swirling, dreamlike coda of ‘Clear Clearer’, and the monk-like choir that turns the eerily pretty ‘Sleeping Pills’ into a stained-glass reverie. It’s not a humourless affair, either: the playful approach of the cheekily titled ‘Libretto Horror’ belies its sinister lyric without undermining it, Semkina’s stunningly dramatic vocal delivered over swooping strings and deliriously unpredictable piano from Kolyadin. Kolyadin’s piano is thrilling throughout, not merely in execution but also in terms of his choice of melodic line, where he rarely takes the easy or expected route. Indeed, existing fans of the band are likely to thrill at the increasingly evident confidence on display. Where sometimes in the past the duo’s music has been slightly tentative – which has often been part of its charm – even the gentle passages here are delivered with a definite flourish. The extended instrumental coda of ‘Too Many Years’, dominated by Kolyadin’s thunderous piano and an uneasy wave of electronica, is a perfect example of the duo’s increased confidence.

The centrepiece of the album, however, is almost certainly the title track. Quite simply, it’s a masterpiece of light and shade. Built upon Kolyadin’s effortless and intricate piano part, by turns powerful and shockingly fragile, Semkina duets with guest vocalist, Riverside’s Mariusz Duda, to heart-shattering effect. Here the central truths of the protagonist’s condition are addressed, and as the song builds towards its mesmerising ending, it’s surely impossible to be unmoved. Reminiscent of Kate Bush or Tori Amos at the peak of their powers, it’s a thing of scintillating beauty; fittingly, a beacon of light and empathy surrounded by the dark seas of sickness and uncertainty.

Often, the feel here is more that of a film soundtrack, or a classical recital, than of a band writing songs, and the album’s construction often reinforces this idea, as with the shimmering string-laden instrumental ‘Harmony’, which appears midway through the record. It acts perhaps as Kolyadin’s showcase, allowing him to stretch out and play outside the confines of traditional song structure. It is an unalloyed joy. As the track switches gears effortlessly between pretty lullaby and jarring uneasiness, you realise that it forms a crucial part of the narrative without actually containing any actual narrative. By this point of the record the ambition and keen, intuitive understanding of the subject matter displayed by the duo becomes clearly evident.

The latter half of the album sees the clouds covering the sun at last, and the water rising around the protagonist’s feet. The determination of ‘Matches’ gives way to the icy, dead-eyed calm of ‘Belighted’ and finally to the realisation that this is a fight that cannot, in this instance at least, be won. ‘Belighted’, lit with swooning strings, music box piano and one of Semkina’s finest vocal performances to date, is simply astounding; it’s a miraculous song that seems much longer than its modest running time might have you expect. Its bleak oasis gives way to ‘Chalk And Coal’, which in a sense is the protagonist’s farewell to a world that her broken psyche can no longer deal with. Realising that they are not getting any better, and that the help being offered to them is ineffectual and is actually making their life even more wretched, the protagonist questions their ability to continue, as the listener is counselled by an invisible army of whispering demons, plangent horns and nightmarish guitar. It’s intensely atmospheric, claustrophobic almost beyond words. Seldom has the isolation and hopelessness of mental illness been so unflinchingly expressed on record.

This brings the listener to ‘I Came Before The Water (Part 2)’, which for the first minute Semkina delivers completely a cappella before being joined once again by a beautiful, tragic yet triumphant, string arrangement that itself gives way to the rolling of the waves. “And so walking into water / I accept my final defeat…” It’s not an unexpected resolution, given all that the protagonist has struggled through, but nonetheless it is dealt with in a staggeringly emotive way. The album closes with the instrumental ‘Post Scriptum’ which binds together some of the recurring instrumental melodies from the album, principally the haunting lines that form ‘I Came Before The Water’, and acts like the music that plays as the credits roll after a film.

Lighthouse is an album that really does have to be heard in full, and under the right conditions, to be truly understood and its full emotional power to be experienced. It’s almost a cliché in this day and age to talk about listening to conceptual records in full, in a single sitting, and removing yourself from any distractions in order to do so. However, Lighthouse is an album that deserves this kind of approach. Like most conceptual records, its power is cumulative and comes from being more than the sum of its already hugely impressive parts. Its strength is not just musical; it comes from Iamthemorning’s innate understanding of its subject matter and its empathetic and comforting, non-judgmental approach. As the band themselves note on their Bandcamp page for the album, “this album is dedicated to the subject of mental illness and we’d like to pass on the message to all the lost souls out there: you are not alone, ever.” Clearly this subject matter is close to the band’s hearts, and it shows.

Lighthouse is, quite simply, Iamthemorning’s finest offering to date. More than that, it’s one of the most moving and healing – and important, in how it so deftly deals with its subject matter – albums you’re likely to hear. A classic in the making, this is a towering achievement on every level.