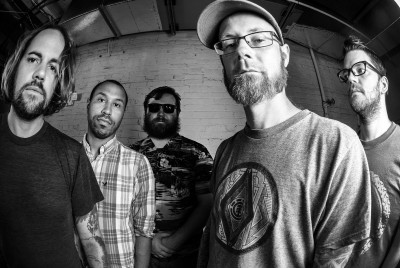 Rosetta on the web:
Bandcamp |

The album is really about what you might call "negative epiphanies". We felt that was a succinct way of getting at the sense of existential disappointment and broken promises that are attached to growing up, maturing, and aging in contemporary life.

We caught up with Matt Weed of Rosetta recently as the band embarks on a US tour to support their latest album Utopioid. If you havn’t read it already, here is our review. The album is amazing and well worth purchasing! But we don’t stop there. We talk about how the band writes, records, and what it’s like being fully independent of a label.

(((0))): Can you talk about how the band thinks of Utoptioid in the context of the five albums that came before? It feels to me like a lot more mature work, with more subtlety, more layering and less reliance on brute force…are you guys happy with it?

Matt – We’re enormously proud of it. We’ve always been an album-oriented band, and all our music was intended to be digested at that scale, in the context of their sequence and dynamic relationships. But I think that with past work there was an automatic drift toward every song having multiple moods and some kind of climax. With this one we were interested in making songs in the service of the whole album concept/narrative, so the songs are each narrower in their focus, but much more widely varied across the whole arc of the album.

We also didn’t confine ourselves to writing music that we could pull off live — the instrumentation is all over the place, with different guitars/keyboards/percussion and different tunings for the different movements of the record. The album as a whole has more breadth than past records, but I think the songs have more depth.

(((0))): What is the underlying theme of the album and can you explain the title? Is it related to the opioid crisis in the US or a commentary on the times? Or is there is a personal aspect to it?

Matt – I wouldn’t say it’s a commentary, and it’s certainly not written from a personal or confessional perspective. There’s a main character, and all the lyrics are first-person and in-character, though some are other voices speaking in the character’s mind. The four movements of the album follow that character’s life from birth to death — but it’s not supposed to be some kind of Terrence Malick-esque meditation on the circle of life, either.

It’s really more about what you might call “negative epiphanies” — the title just mashes up “utopia” and “opioid.” We felt that was a succinct way of getting at the sense of existential disappointment and broken promises that are attached to growing up, maturing, and aging in contemporary life. The album moves from wonder and joy to hubris, to denial, to guilt, to surrender. Opioids are obviously one very real way that people self-destructively deal with deep disappointment, loneliness, and meaninglessness. But there are so many other ways, and virtually everyone turns to some kind of escapism sooner or later.

On a personal level, I’ve dealt with a lot of anxiety and medical problems over the last year or so, and that certainly colored my contributions to the record. It’s a different journey for each member, but we’ve all been touched by situations where people just disappeared into some kind of literal or metaphorical opiate and never really returned from that. Or worse, they beat it but then found that life was just as meaningless as it ever was before. Everyone needs something to look forward to, but it seems that fewer and fewer people have that.

(((0))): Could you talk about the writing and recording process and if there were any big differences from prior work?

Matt – It was a totally different workflow from past records. We’ve been moving toward a more verbal, discussion-oriented writing process for a few years now, but it was finally consummated on Utopioid. This time, the concept came first, and had outlined the topics and structure of the record before we even started writing music. We had brainstorming sessions and posted up flipchart sheets all around our rehearsal room, then dedicated certain periods of writing to specific parts of the album, selecting instrumentation and equipment based on the content of whatever part of the story we were working on. We wrote the lyrics collectively, which took forever, but I think we ended up with a body of work that is more coherent and focused, and less inflected by any one member’s personality. Even with the instrumentals, everyone was involved with arranging other people’s parts, so while we each have specific instrumental performance duties, everything was collectively composed.

For recording and mixing, we went back to Studio G Brooklyn, where The Anaesthete was made. Francisco Botero, who assisted on The Anaesthete, was the lead producer/engineer for this one. Studio G’s main strong point is that they use production techniques in a creative/artistic way, rather than seeing it as an arms-race for “sound quality.” That fit perfectly with our goals. More importantly, Francisco is a creative engineer but not precious about his work, so we immediately locked into a collaborative and trusting workflow. It might have been the most fun we’ve ever had recording an album.

(((0))): Most of the band members have been together since the beginning. How is it now that everyone is a bit older, has relationships, responsibilities jobs etc?

Matt – At no point have any of us been able to do the band full-time, so juggling those things has always been a limiting factor to different degrees. We used to only tour during the summers, when Armine was teaching high school. We have some more flexibility now, but it’s still a struggle. Maybe the biggest change is having Eric in the band, since he lives in New York and the rest of us are in Philadelphia. We have to be much more intentional about scheduling practice and writing time together, since we all still work best and most efficiently when we’re physically in the same place. Usually Eric comes down to Philadelphia one weekend a month, and we do 3-4 consecutive days, followed by a long lull. There are trade-offs to that kind of concentrated and irregular practice, but it’s working for us for the time being.

(((0))): You guys split with Translation Loss a few years ago and decided to be independent. How has that been?

Matt – It’s a lot more work being completely independent, but I think that was the right choice for us. We certainly had conflict with TL, but in retrospect, we would have had those conflicts with any label. We’re on friendly terms with them and they’re working on anniversary reissues of some of our early material. But with labels generally, sometimes it feels like they’re just trying to stave off their own obsolescence by functioning as industry gatekeepers, and being independent means that we lack access to those networks. But the upsides more than outweigh it: total control over scheduling, how much touring you do, how you record or present your music, etc. And I think we have a deep and trusting relationship with our listener base, which enables us to keep going from a financial perspective, but also enlivens what we do because we’re always aware that our music is deeply important to people. I wouldn’t trade that for anything.