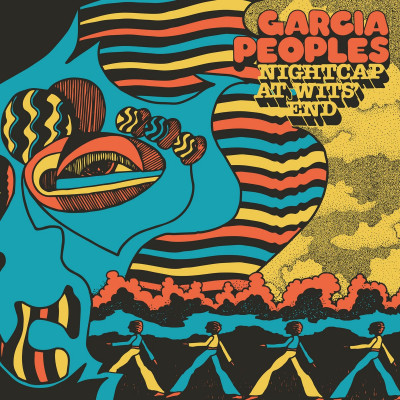 After last years rather excellent jam odyssey which was the One Step Behind album, itself a swift follow up to their more strait-laced Natural Facts, you certainly would not have wanted to lay money on where Garcia Peoples were going to head to next. We haven’t had too long to wait though as just as the dust has settled they ride into town once again with their new album Nightcap At Wits‘ End. Gone are the lengthy jams though, and in place is a much finer hewn album of intense psychedelia.

Maybe GP have been listening to Love and Small Faces as the Dead indebted choogling of before seems to have been replaced by a much deeper exploration of psych, with the music becoming a more shape-shifting entity than the direct riffs that had come before. That’s not to say they have abandoned those, as first song ‘Gliding Through’ testifies with its full on swagger introducing a much more self assured and confident band. Having seen how well received the previous album has been, and with an ever growing army of fans, this boost in confidence sees them emerging as the prime exponents of their noise.

It would be almost forgivable if they just rested on their laurels but it soon becomes apparent that GP are not here to relive past glories (unless they are directly in line with their influences), and that maturity plays well into both ‘Wasted Time’ and the Arthur Lee mimicking ‘Altered Place’, a song which utilises the aforementioned artists paranoid genius to great effect. There is a blatant debt here, but paid out in such a way that it becomes very much the sound of now. Suffused through it all is an uneasy darkness too, adding weight to the songs when before they could fly by without you noticing too much what was happening inside.

‘Painting A Vision That Carries’ is a true highlight which is no mean feat considering it is followed by a side long suite of songs. It traverses the light fantastic set in motion from that opening track and balances delicate melodies with glorious harmonies, and we should focus on those said harmonies as they have grown into a vital ingredient of the GP sound. The naivety of before replaced by this new-found confidence, on a song which places itself firmly in their growing list of classics.

So on to the suite and it’s an unusual one in that rather than being an over pompous mix of sounds, it uses their well worn jam technique to slowly shift each song into different motions. The changes come more with the colour and tone of the song, rather than a full on psychedelic trip. From the blues of ‘One At A Time’, which is the most direct track on the album, it soon dissolves into a strange disorder. In between tracks are jammed instrumentals which casually lead the listener on to the next piece, and the marvel is that it all seems so perfectly seamless. The evolution of the suite from blues riff to the pastoral psych of ‘Shadow’ is so perfectly tuned that unless you had the track-list in front of you and noticed the music player referencing the change, then you would believe it was all one song. Within that comes subtle changes though, as it drifts from the Eastern tinged arpeggios of ‘Crown Of Thought’, to the hypnotic drone of ‘A Reckoning’ before emerging in that pastoral wonderland.

It’s been nothing but pleasure to see a band develop so far in such a short space of time, and whilst there is always scope for improvement, in Nightcap At Wits‘ End, the band have created their best release so far. Obviously its a little churlish to cast such aspirations at a band who have changed with every album, but its the sheer confidence in what they are doing that really sets this album apart. It’s almost as if One Step Behind was just a warm up, and if that truly is the case then we could be facing a band who have many more tricks up their sleeve. Now all we need is for the world to get back to some normality and for Garcia Peoples to tour and conquer the world. It’s waiting, we are waiting.` 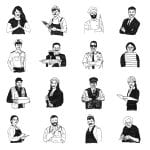