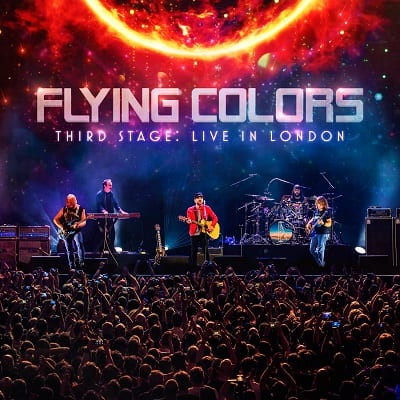 Flying Colors have been pretty busy last year with the release of their third studio album Third Degree. Since everything has been shut down due to COVID-19 and being in Quarantine, most of the time with some cabin fever to being cooped up in our own houses or apartments, music has always lifted our spirits up. That and the band’s third live album recorded on December 14, 2019 at the O2 Shepherd’s Bush Empire, it showcases the band at their finest during the time they were promoting their latest release.

Listening to this 2-CD set, is like being at the venue, showing your support for Neal Morse, Steve Morse, Dave LaRue, Mike Portnoy, and Casey McPherson by giving the Empire a killer performance before Christmas. And I can imagine for the audience it was the perfect early Christmas gift. To bring the essence of Prog, Pop, Hard Rock, and Psychedelic grooves to the band’s sound, the music is all inside their electrical veins. From the sound of the Beatles mellotronic beauty of ‘Flying’ and Portnoy saying, “Welcome, to the rarest of all sightings. Rarer than the UFO sighting, rarer than a sasquatch sighting, a Flying Colors sighting, live on stage here in London!” And off we go with the opener, ‘Blue Ocean’.

Here, LaRue channels the late great Holger Czukay’s bass riff of CAN’s ‘Father Cannot Yell’ as Neal and Steve channel some soulful grooves to the mix by giving Casey a chance to go into the arrangements of Prince’s ‘Sign O’ The Times’ as they burst through the flood gates inside the venue. ‘A Place In Your World’ features some incredible organ and guitar work.

It feels like a fanfare for the Carnival to begin as Portnoy brings out the fun and excitement for the audience as Flying Colors channel the unsung heroes of the three piece trio from Germany, Triumvirat. I love how Neal and Casey do a duet together as Steve helps out by going into some unknown worlds that audiences are exploring throughout their set.

‘More’ steals the show. You have this orchestral midsection that the audience claps along to the beat before it goes into an operatic fusion state as Casey comes up to the horizon to see the devastation on what has happened. Neal’s synths go batshit crazy as Dave and Steve race to the finish line while the crowd cheers for the song, ‘Kayla’ from their sole self-titled 2012 debut album. And they knew it was coming. I can imagine this song had a huge impact from the moment they first heard it eight years ago. I love how Neal sings in this waltz format with a medieval section as Steve’s arpeggiated melodies, gives it a shining momentum.

‘Geronimo’ sees LaRue laying down the Funkadelic grooves with the pop-and-slap texture by channeling both Bootsy Collins and Larry Graham. The band give Dave some leeway to take center stage by getting those energy levels up to a hundred with a Jazz Fusion/Soul crossover for a couple of minutes before going into the Swinging Prog twist between Cab Calloway and the Duke-era of Genesis.

‘You Are Not Alone’ features both Neal and Steve’s melodic introduction filling up more and more to get audiences on their feet. Casey brings his heart and soul to lend each member in the crowd a helping hand as you can imagine yourself being in the eye of Hurricane Harvey two years ago when it hit both Texas and Louisiana. However Casey makes you feel that despite what’s happening right now this year, we’re all in this together.

‘Cosmic Symphony’ begins with a thunderstorm, the Leslie piano channeling Pink Floyd’s Meddle-era, drum clicking effects from Portnoy, mournful Rhodes, bluesy guitar lines, Casey giving the Shepherd’s Bush Empire crowd a sermon, and Dave and Steve duke it out with their instruments while having some fun which is needed. You always need some humor to know to cut the tension to have a little bit of that touch in your arrangements.

‘Peaceful Harbor’ is Neal’s answer throughout his church organ by channeling the electronic rock maestros of Tangerine Dream as Casey’s vocalizations fill up once by calling out to the gods once more before he plays his 6-string acoustic guitar by honoring the late great David Bowie tackling his Hunky Dory-era. Steve’s arrangements hits every fret as he follows the band like a conductor as he gives them directions on where he wants to go. The audience at times hums along to the music as Casey helps them out for a bit to keep in time with the rhythm as it erupts like a flower blooming. ‘Mask Machine’ features Dale’s bass booming in a metallic fuzz tone as it becomes this climbing texture with some electronic mellotrons while Steve revs up his motorcycling guitar to give Casey a chance to sing through a megaphone as he details the Orwellian nightmare that we’re living in.

‘Love Letter’ is where they tug you right inside their hearts by going into an ecstatic live version of the song. You could tell that Flying Colors are giving the audience a chance to sing-along by channeling the essence of Klaatu, The Beatles, and Electric Light Orchestra. I could tell that listening to the live version of the piece, the audience are having a ball including the band members to lift their heights up more and more.

Flying Colors have really taken higher ground with their third live release this year. The chemistry on here between the band and the audience at the O2 Shepherd’s Bush Empire, is quite a magical journey from start to finish. And if you really want to get into the band’s music, this live album, is one I highly recommend you would definitely start off with.