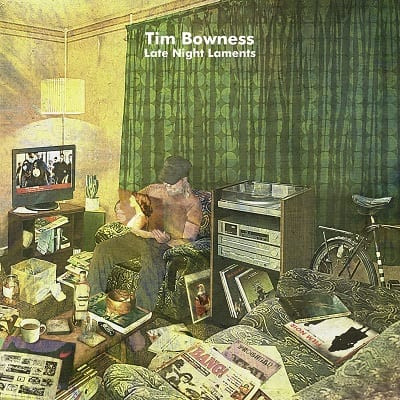 “It was all about that moment,
soul survival in the heat –
feelings rising from the deep.

it was all about the build-up
and the ever-hungry beast –
hearing sirens in my sleep.”

The lines from ‘I’m Better Now’ deal with the subject on domestic abuse. And for Tim Bowness, he has taken some of the themes with his sixth release this year on the InsideOut label entitled, Late Night Laments for a deeper, darker, atmospheric scenario.

Tim has taken the advantage of going in to the heart on the themes of violence, insanity, social exclusion, and generational divisions. And with a little help from Richard Barbieri, Alistair Murphy, Colin Edwin, and Knifeworld’s Kavus Torabi and Melanie Woods, they lend Tim a helping hand by bringing his latest album to life.

Not to mention the mixing from his No-Man collaborator, Steven Wilson. Who not only he has been with Wilson for 34 years, but also is a co-host for this incredible Podcast that launched this year entitled, The Album Years. It has reached the top 5 music podcast charts in over 25 countries. And with Calum Malcolm (The Blue Nile, Fish, Mark Knopfler, and Simple Minds) in the mastering realm, the music is exotic, surreal, acoustic, electronic, and featuring some unexpected moments that gives the listener a chance to see where Bowness is going with five centerpieces that is on Late Night Laments.

The views on ‘Darkline’ tackle into a suicidal and evil maniac who is going through the creep level while suffering both loss and depression as Richard Barbieri brings his synthesizers to cry out into the night as ‘We Caught the Light’ is a laid-back groove with a lullaby rhythm section that goes through a sound delay with Atherton’s vibraphone and Edwin’s double bass lending the arms into wide open spaces to reveal its true glory.

‘The Last Getaway’ is Bowness tip of the hat towards an electronic version of Wings’ ‘Silly Love Songs’ as Richard comes back with some swirling exercises before coming back home to Earth. ‘Northern Rain’ which starts the album off, deals with what is happening in the World right now, isn’t is what we know for what it was in the past and present, but it is dying in front of our eyes that was bound to happen in the years to come. The keyboards sets up the sound effects of the rain dripping down before it changes into this blaring effect of the first glimpse of the sun coming out from the calm after the storm. ‘Hidden Life’ is the subject dealing with someone who is the voice of the people in front of their followers, but behind the scenes, they reveal its darker side by taking the mask off and what they’re doing, is one big gigantic lie.

The arrangements on the composition has this post-rock/new wave approach between Soft Cell and Ultravox’s Vienna that Bowness himself delves into the deeper waters of the genre. Tim’s Late Night Laments was another big challenge for me. This took me a long, long time to get into this album. And while it didn’t click with my earbuds, some of the music was fine, but a little tedious in some parts of the arrangements.

Now I’m not slamming the album, but I felt that Tim could’ve lifted some of the compositions up to a higher level in what he did between Stupid Things That Mean the World and Lost in the Ghost Light. Understand that Tim’s music may not be everyone’s cup of tea. And I always welcome to see what Tim would think of next. It’s an okay release, but with my ears, it just didn’t click. And I hope for that in the years to come in the roaring ‘20s for Tim to come back swinging again for another adventure with the listeners once more.