(((O))) Review: Girls In Synthesis – Now Here’s An Echo From Your Future 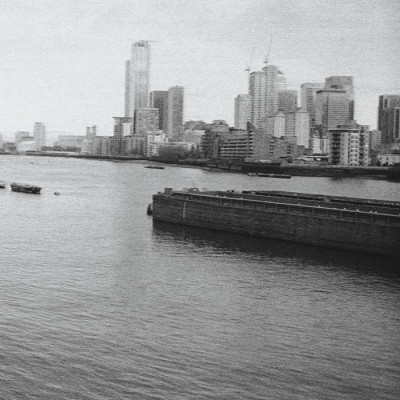 Now Here's An Echo From Your Future by Girls In Synthesis

“The most basic tenet of the Bauhaus was form follows function. … Because of the Bauhaus belief in the oneness of the artist and the craftsman, their courses taught students to eliminate the ideas of the individual and instead focus on the productivity of design” (1).

Truly revolutionary music isn’t just about lyrical content it is also about form, structure, texture. Dada, Bauhaus, Russian Constructivism wrestled with the question of form as well as content, if forms and structures can reproduce bourgeois values as James claims (2) then they can also produce and communicate alternative narratives, contestation of the (neoliberal) status quo. It was an idea that was pursued by several of the post punk bands including The Raincoats; can you create music that is a transposition of counter cultural concepts and practice into both the creative process and musical form? Truly revolutionary music moves away from the (inspired) lone artistic genius towards collaboration, collectivity, an artisanal sensibility in the process of production as well as revolutionary form and content.

Which brings us to Girls In Synthesis who, taking their cues from the early DIY punk and post-punk pioneers, keep everything in-house, their artwork, videos, performances and recordings created entirely by the band (art collective?) and their handful of trusted collaborators. So far GIS have operated as a DIY collective, part of a network of resistance. There have been antecedents; Test Dept, Henry Cow, Gnod, bands that have followed a similar path of both inter and independence.

The results of this model were compiled in the 2019 release Pre/Post: A Collection 2016-2018, a compilation of their previous EP releases, a jarring, exhilarating, intense expression of urban working class experience in 21st century Britain. Both musically and lyrically Pre/Post was a perfect representation of the stressful, anxious, precarious alienation so many of us cope with but at the same time they reminded us through their live shows of the cultural and social resources available; the importance of egalitarian community, trust, mutual respect, hope.

So where do you go when your creative model, musical form, lyrical content and live practice are all that could be reasonably hoped for in a band? How do you move from phase 1 to phase 2? How do you follow up Pre/Post?… You release Now Here’s An Echo From Your Future.

Ten tracks, 31 minutes that both reflect and interrogate the individual and social experience in contemporary Britain with searing, brutal insight, honesty and vulnerability. You will understand more about modern life in 31 minutes of NHAEFYF than you would from 31 years of tabloid newspapers and state/capitalist broadcasters.

On first listen NHAEFYF was like being bludgeoned with a very loud stick (?), a wall of ferocity with a disconcerting break in the middle. But on the second listen you start to experience the contours, shades, multiple textures, extra instrumentation as the songs take shape, emerge as defined, separate entities ( initially I was going to write ‘hear’ not ‘experience’ but it is more than aural).

First track up is ‘Arterial Movement’, released as part of a 3 track EP in October last year it’s a track that pulses intensity at you!! It’s like an adrenalised heartbeat of music, coming at you, dropping back, like being able to hear your own blood pulsing through your body, “Walk along the roads that we create. Travelling the distance that we need. To take away the pain you feel inside. Hard when no progress can be seen…We progress, progress in arterial movements. We define, define in arterial movements… Opening the door to somewhere else. Managing the contents there within…” An expression of empathy, of care, of solidarity, the song deals with the process of helping someone through their mental struggles, while simultaneously being wholly aware of your own issues. “Victories don’t always look like other people think they should” said an old man in the film Good Vibrations (4).

‘Pressure’ The video for this when released in November was of the band live, black and white, hand held, interspersed with the band on a rooftop, boiler suits and boots, utilitarian clothing for cultural workers.  Watching it again made me re-realise how much I’m missing live music
“I won’t cooperate with anyone who doesn’t play their part”.

‘The Images Agree’ is the most recent single and another storming track that comes at you in a barrage of sound and images, on first listen it seemed like several things going on at once that happened to be in sync, but only just! The press release put it better “The song features the trademark driving bass and drums, which now forms part of the signature GIS sound. But, on top of this, is unusually dissonant guitar that pulls the listeners focus away from the main melodic and rhythmic elements and towards what could pass as another song altogether”. John commented on the song’s subject matter “Media manipulation has become an art and a tool for people with the wrong intentions to control or mislead the public, as this becomes more and more acceptable (or undetectable…) it’s important to question and not blindly accept. As we have seen with the government’s recent lack of clarity and transparency during the current pandemic, a headswim of confusion is created to stop people seeking the truth, no matter how despairing it may be.”

‘Human Frailty’ is a tender look at the process of aging and eventual death, “Wish I could halt time that lays waste to your body, Stop the clock on ageing that makes your bones brittle, the minutes speed through, the hours do too, Against any reasoning my time spent with you. Relent human frailty, relent human frailty”. Towards the end the introduction of brass adds a different, poignant texture to the song.

‘They’re Not Listening’ is an important reminder to working class people who have somehow ended up believing that Boris Johnson is their mate, that the right wing of the Tory party always have their own best interests at heart! To quote the press release again ‘They’re Not Listening’ reflects on the fact that “the time-old tradition of the right wing accosting desperate working class people has returned.” The lyrics seem to express the disempowering, reductive experience of being ignored, overlooked, of no consequence in an instrumentalist system where all that was wanted was your vote.

‘Cause For Concern’ “Constant cause for clash. Pointed, surging, crash. Can’t escape or learn. Constant cause for concern….We can’t go on this way, NO!” I think at the moment the next two tracks are my favourites on the album. ‘Coming Up For Air’. “I’m coming up for air, suffocation, suffocation”. Dense and intense!

‘Set Up To Fail’ “Bored of what scores of people still adore, holding up the ceiling whilst falling through the floor, Scraping down the walls until my nail beds rub raw, Settling for less, screaming out for more more, more”. Describe it as Utopian if you want to but that knowledge, that sense, that things can be, will be, better persists despite capitalism’s attempts to convince us otherwise, We can still imagine the end of capitalism, we can still envisage a better world, we cannot reconcile ourselves to the dreary shit of recycled culture and ‘just about getting by’. Again they use discordant brass to give the prolonged driving outro a superb feel.

‘Tirades of Hate and Fear’ explores the rise of provincial, reactionary xenophobic politics and reminded me of How To Lose a Country by Ece Temelkuran, who writes that nationalist populism tends to emerge in the provincial towns away from the urban centres (5). Suburban Hell? “I hear too much noise, and not enough thought, insecure people are easily bought…Screaming from your lungs, looking for more fools, using fear and hate as your recruitment tools”.

The outdated idea of continual social progress is gone, after 40 years of neoliberal governance, 10 years of top down class war masquerading as austerity, with a far right government and print media well versed in the strategies of propaganda and bullshit any one who has been paying attention knows that culture can go either way; a more egalitarian future or a slide into increasing dystopia; ‘transition to socialism or regression into barbarism’ to steal Engels/Rosa Luxemburg’s phrase (3). Now could be an echo from our future…of increasingly authoritarian capitalism and environmental melt down but there is still hope, the chance of an egalitarian, progressive society. With NHAEFYF Girls In Synthesis present us with these two options and implicitly ask us to decide whose side we’re on.

(5)Temelkuran, E. (2019) How To Lose a Country; The Seven Steps From Democracy To Dictatorship, 4th Estate, London.