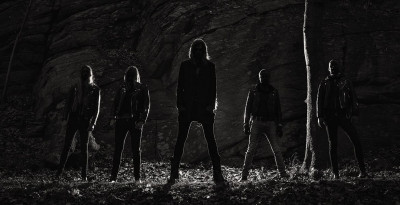 We want the listeners to raise their fists, and then the next second have goosebumps.

Swedish metal band Vampire combine the best of death and thrash with a macabre twist to create music akin to the likes of Mercyful Fate and Possessed. The band’s latest album Rex is a full on blast of raw heavy metal that is sure to satisfy even most hardened metal fan. Gavin Brown caught up with guitarist Black String to hear all about Rex and how the album was created as well as discussing the history of Vampire, lockdown gigs and favourite vampire movies.

E&D: Your new album Rex is out now. How did the creation and recording of the album go?

Black String: It went smooth despite the fact that it took quite a while to get it finished. I and our drummer recorded most of the arrangements together over about a year, simultaneously we re-arranged things with the whole band in our rehearsal room. We recorded the album in two sessions with six months in between. Just like our previous album With Primeval Force, we recorded Rex in Studio Nacksving in central Gothenburg. It’s a place we like and it’s comfortable to be there.

E&D: You have released a few tracks in ‘Melek-Taus’, ‘Serafim’ and ‘Rex’ from the album already. How have on been received and are they representative of the sound of the album?

Black String: ‘Melek-Taus’ has been the most successful of the three, probably because it was the first track we released for a long time. We chose these tracks because they represent the overall sound of the album.

E&D: You have just released the video for ‘Rex’, the title track of the album. Can you tell us a bit about the video and its themes?

Black String: The song theme is a twist on the fate of the Swedish king Charles XII (“Rex”); what if it turned out that he became a victim of the mountain god Hiisi. Naturally it would be an expensive project to screen this theme, so what you see is a dreamy perspective on the death of Charles XII.

E&D: What does the title of the album relate to?

Black String: It mainly relates to the cover artwork, depicting the triumph of death.

E&D: How has the band are your sound developed in the three years since your last album With Primeval Force?

Black String: In my opinion there’s more focus on the beautiful (harmonies) on this album. With Primeval Force was a bit more to the ugly side of things, even if there’s a lot of beauty on it as well.

E&D: The album contains of lot of melody in amongst the heaviness, do you think that these elements make up the Vampire sound you want?

Black String: The sound you mentioned is the result of what we’ve been up to in the last nine years; our formula so to speak. We want the listeners to raise their fists, and then the next second have goosebumps.

E&D: What music are you currently listening to at the moment?

Black String: I highly recommend Sweven’s album The Eternal Resonance. I’ve also listened a lot to a friends’ band called Source, they’ve a 7”EP out. What else… I still haven’t heard more than a few songs but I urge everyone to check out Henrik Palm’s (ex-In Solitude etc.) coming album when it’s released this Autumn.

E&D: You recently played your first gig in ten months, how did it go and was it strange to do it in front of no physical audience?

Black String: It was a good experience, but it’s more strenuous to play in front of a camera than before an audience of five thousand people!

E&D: Did you play a lot of new material at the gig?

Black String: We performed three songs from Rex, it’s a promotional thing for the album after all.

E&D: Have you got any gigs sorted when they start happening again at all?

Black String: No, we don’t have anything planned. If there’s demand we might hopefully give it a go.

E&D: How did the show at last year’s Wacken Festival go?

Black String: It turned out really well except for the usual small playing mistakes. We were overwhelmed with the audience, which was at least five times bigger than our gigs at medium sized venues in Sweden. It was also cool to hang out backstage afterwards, meeting David Vincent and other rock stars.

E&D: Will you be playing at any festivals next summer when they start happening again?

Black String: We hope so! We’re too occupied with other things to do any gigs this summer anyway. One could say that covid-19 saved us from publicly renouncing a promising career.

E&D: What has been the most memorable gig that Vampire have ever played

Black String: I’d say Wacken Open Air and Fall of Summer (France). Apparently people in France are still talking about that gig, so apparently we did alright.

E&D: What has been the best gig you have ever seen as a fan?

Black String: I think Morbid Angel in Malmö, 2005. It was magic just to see Trey Azagthoth having that last cigarette before entering the stage to perform all these immortal classics.

E&D: What was the first gig you ever went to?

E&D: Fenriz from Darkthrone has stated he is a fan of Vampire. How does it feel having such iconic musicians being fans of the band?

Black String: I don’t think he bothers about Vampire anymore, he was into our demo and that’s all I guess. Anyway, it came to our great surprise that the legend behind the early Darkthrone albums was into what we’re doing.

E&D: How did Vampire start as a band in the first place?

Black String: The idea to form Vampire came from our singer Lars (“Hand of Doom”) in the summer of 2011 when we met up at his place just before the “big four” concert in Gothenburg featuring Metallica, Slayer, Megadeth and Anthrax. Lars put on an old Necrophagia track and insisted we start a band in the similar vein, meaning mid 80’s, proto-death metal. Shortly afterwards we asked Lars’ friend “Command” to join us on the bass guitar. It was Lars who brought up the first ideas for our sound. Quite primitive, but real catchy riffs. Back then I had a real Slayer revival going on and I had also been writing Mercyful Fate-influenced stuff for years already, so my contributions were a little bit in that vein. Our demo (2012) and first album (recorded in 2013) was a mix of Lars’ and my styles. Before our second album we added a second guitarist (“Sepulchral Condor”) and a new drummer (his brother, “Abysmal Condor”) and most of the songwriting ended up on my table. Our new members meant a lot of fresh power to our sound, and that’s how we gradually evolved into the style we have today.

E&D: Who are the band’s biggest influences?

Black String: It varies over time, but our fundamental is the early heavy/thrash/death/black metal scene.

E&D: How did you get into death and thrash metal in the first place?

Black String: I attended music school at the age of ten, where I met other kids who were into Metallica (I was mostly into Guns N’ Roses before that). We came to form a band called Darkness, sounding like a really bad version of Metallica. At the same time we found out about Slayer and Sepultura. Thanks to MTV I found the Morbid Angel video ‘God of Emptiness’; it was the most morbid sounding stuff I’d ever heard. I think it still is! Being twelve years old we didn’t have much money of course, so I could mostly afford EPs, like The Laibach Remixes by Morbid Angel, Stranger Aeons by Entombed, A Winter Shadow by Tiamat and …Revenge by Unleashed. Of course we swapped tapes with each other too. That was life in the early 1990’s – hanging out at the local record shops to listen to albums we couldn’t afford, and listening dozens of times to the few albums we had. Ah, those were the times!

E&D: What attracted you to the darker elements of the human psyche?

Black String: I’m interested in most things hidden beneath the surface of things. What’s “dark” is that which doesn’t reflect light, what’s hidden. I’m fascinated how little people are ready to speak about themselves and what’s inside their minds.

E&D: What influence have horror movies had on  the music of Vampire and what are some of your favourite movies?

Black String: I don’t watch horror movies myself really, that’s our singer Hand of Doom’s department. He brought some horror movie influences into our music for the demo and our first album. I don’t have many horror movie recommendations, perhaps The Silence of the Lambs fits in? I’d be happy to recommend another classic movie namely Milcho Manchevski’s Before the Rain.

E&D: What is your favourite vampire movie?

Black String: The original Nosferatu movie. I used to like the Bram Stokers’ Dracula movie from the 1990’s too, but I don’t know what I would think about it today.

E&D: Which albums have had the biggest effect on you an influence and why?

Black String: Easily Storm Of The Lights Bane and Det Som Engang Var. I got the CDs in the winter times of 1994-1995, as a teenager these cold albums really left an impression.

E&D: Who is the biggest influence on you as a musician?

Black String: No specific person. I could make a long list of great musicians whose works I admire, but it would be too long. Let me just say that I like people with a vision, who dare go their own way. The world is full of anxious conformists.

E&D: What have been some of the proudest moments in your career with Vampire so far?

Black String: I’m proud of our achievements when someone really understands what we’re aiming for with our music.