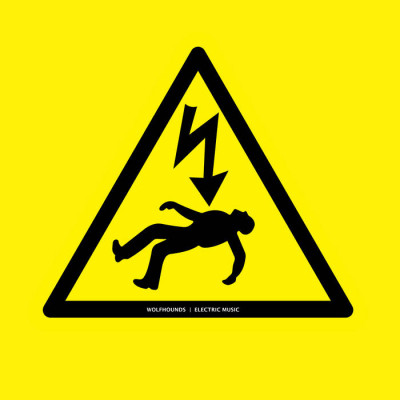 Electric Music by The Wolfhounds

One of the biggest regrets East London sonic agitators the Wolfhounds may have dates way back to 1986, when they were asked to put in a song for an NME fronted free cassette (C86), which is now legendary for setting the scene for 80s Indie music. For those who have followed the band, both then and since, know that their contribution was a bit of throwaway song compared to, well, basically everything else they have written and released.

Fast forward to the present day and the word throwaway is as long distance away as 1986, as the band release their follow up to arguably their career best 2017’s Untied Kingdom(…or how to come to terms with your culture). An album which thrillingly cast the band as both socially relevant and in an incredible expansive creative peak. Consequently, there is always a fear for any band being able to follow it up without the word disappointment being uttered. Fear not – the album title does not lie.

Electric Music wisely doesn’t try to be an Untied Kingdom 2, but like all Wolfies albums it is another statement of the times as guitarist/vocalist Dave Callahan’s piercingly sharp, intelligently thought provoking lyrics prove. The album opener ‘Can’t See The Light’ opening lines “The agents of ruin uncowed, uncurtailed. The prophets of reason have tried and they’ve failed” is as powerfully packed as anything you will hear this year.

Dave’s lyrics have always been largely concerned with the chaos and confusion of modern life. And Electric Music is no exception, even though many topics are covered across the nine songs, the sense of fear, uncertainty, disillusion, sticks out the strongest, as well as a sense of the utter disbelief on how the bloody hell did we get here. Let’s face it, the strong stench of despondency was already in the air way before the Covid-19 pandemic.

And they do this by writing an album of quite possibly some of their finest songs to date. The afore-mentioned lead-off single ‘Can’t See The Light’ opening guitar lines signal a warning, and Richard Golding’s huge rumbling bass sets the tone; it’s one of the catchiest tunes they’ve ever done. The good news is, it has great company.

Andy taking main vocals and Dave adopting slide guitar provide different textures on ‘Lightning’s Going To Strike Again’. It is these extra diverse touches culminate to give Electric Music wonderful variation and at times a slightly more accessible listen, while still maintaining their natural spiky cutting edge. The Wolfhounds have always had a confrontational demeanour, but for the un-initiated Electric Music could be a good way in, and like Untied Kingdom, it also deserves a wider audience.

The band have experimented with vocal background melodies in the past, but Alice Golding and Katherine Mountain Whitaker individually contribute deftly applied and subtly effective harmonies to illuminate the melodies. Katherine and Dave’s duets are the extra sprinkling of gold dust on the infectious ‘Stand Apart’ and the sombre in tone ‘The Roaches.’

Electric Music is the Wolfhounds in customary relevant thoughtful mood, but this time with an added dollop of fear and disillusionment. Wrapped around brightly bursting barbed wire hummable earworm melodies, it’s the sonic adventurism we have come to expect from them over the years, but these experienced wiser heads really are producing songs as good as anything from their eighties repertoire, and even some of their finest tunes period. Electric Music, indeed!