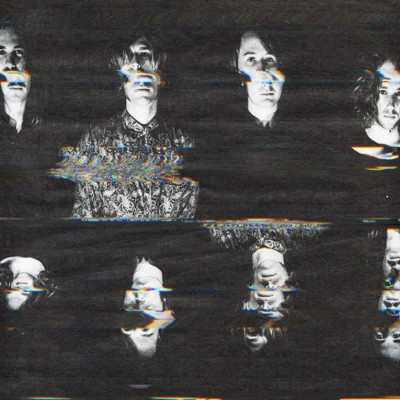 I guess at this stage of making music together it’s all about the enjoyment for us and building a platform to express our creativity, rather than trying to battle for success, something that may have taken the enjoyment out in the past.

Originally, I met Luke Spinks and Patrick C. Smith as a sound engineer and a bartender for The Lexington(Kings Cross) respectively, at the time they were both playing in the band Josefine Ohrn + The Liberation. But, they’re also known for their own project The Eskimo Chain and their label Spring Chicken Records. In this interview, I will painstakingly extract information from this duo in order to allow you to share my enjoyment of their artistry.

(((o))): So, I guess the easiest way to compartmentalise is to start by asking, what have you guys been working on and towards together recently?

Luke: Well, recently we have actually been talking a lot about where to take things next. Having recently released our second album (E.X.O. Incorporated), which was very different from the first (Abnormal Dreams), we are looking at how to keep things exciting, not just for the listener but for ourselves as well. Over the recent years we have been listening to more and more electronic music and going to more raves than gigs per se. Exploring labels like WARP, R&S, artists like Aphex Twin/Clark/Squarepusher/Lone/Orbital. With this in mind, we are very interested in making more electronic music, putting down the guitars for ARPs and sequencers and designing and building crazy circuits and exploring different drum machines from over the years.

We’re also in heavy talks about building more of a collective than a band and also a potential name change to freshen up the project. I guess at this stage of making music together, it’s all about the enjoyment for us and building a platform to express our creativity, rather than trying to battle for success, something that may have taken the enjoyment out in the past.

(((o))): On an individual level, Pat can you tell us about your nascent pedal manufacturing company, Intensive Care Audio?

Patrick: When the lock down started, I suddenly found myself with a lot more time in my hands, and I was able to do in a couple of months what I had expected to take the best part of a year. I work for Intensive Care Audio full time, but when lock down started we all had to start working from home. Luckily I was able to work out of my workshop in Hackney. The work slowed slightly so in my spare time I started designing PCBs for some pedals I’ve been working on for a while, and decided to properly launch Intensive Care Audio. It’s early days but seems to be going well.

The first pedal I released was the FIDELEATER which is a pretty deranged lo-fi chorus/vibrato/delay. It’s got 8 different LFO waveforms so there’s lots of intense pitch bending but it can be used as a more conventional chorus or vibrato too. Sometimes I have to remind myself that not everybody likes things to sound as weird as I do, so it’s important to have some more traditional sounds available.

Next to be released is a combination of a state variable filter, ring modulator and distortion, with the same 8 LFO waveforms, so it’s a kind of auto wah whose ring modulation frequency shifts at the same speed and wave shape as the filter. I really wish I’d called it Robot Wahs. I could have tried to get Craig Charles to endorse it. Maybe on the next run.

(((o))): I fucking love that idea, when I have more money maybe I can buy a custom Robot Wahs…

(((o))): Luke, a lot of people I know have been following your Spring Chicken radio show with guests such as Rocket Recording’s Chris Reeder and White Heat’s Marcus Harris, who else do you have lined up for the show and maybe can you tell the readers a bit about what kind of stuff you’re playing and if they can submit to it and I guess on overall history of how it came about?

Luke: Well, the radio show was something I’ve wanted to do for about 6-7 years but never found the time, then lockdown came along and it was the perfect time to get stuck in with it. It started out as a bit of fun mostly for friends to enjoy a collective listen to tracks, which we would ordinarily meet up and listen to together at weekends. Then, as the weeks went on themed nights started to play out so that’s when I thought I’d get others involved. We’ve had a wide variety of specials over the weeks, 60s Garage, Library Music, World/Latin, Funk/Soul, a Live Music week, a Record Label special and also an Eskimo Chain special which was so fun to put together.

I’ve taken a break recently but I think my next show will be a 90s Rave special. Recently, I’ve been on the hunt for some of my Uncle’s rare 90s Jungle and Trance tapes and records that he made in the 90s. He lost them all in a house move, and we’ve been trying to find people who have them, and getting them to send them over. I’m currently remastering them and I’m going to eventually put them out on my label Spring Chicken Records. So, I was thinking that I’ll have a phone interview with my Uncle and play some of his tracks out, amongst overs. As for submitting or sending tracks over I’d love to hear from people and their music, they can hit me up at https://www.facebook.com/springchickenrecords and send me a message.

(((o))): This round is an all-play, how has the lockdown effected your output?

Luke: We’ve been having regular webcam chats and talking about ideas for the future. We’ve been sending each other samples and loops for each of us to try and put things down on. We have all been very active throughout lockdown with our own endeavours also.

Joe(Keys) has started his side project Ancient Grains and has released a few tracks, with an EP to be released in the future on Spring Chicken Records. https://www.facebook.com/ancientgrainsmusic/

Patrick(Vocals, Guitar) has been continuing to design new and crazy pedals and signal generators, and has lifted his own FX pedal company off the ground Intensive Care Audio. https://www.facebook.com/intensivecareaudio/

As for myself, Luke (Drums) I’ve been broadcasting the radio show each week and I’ve been mastering tracks for friends and other upcoming releases on the label. https://www.facebook.com/springchickenrecords

If you’re interested, you can listen back to The Eskimo Chain radio special to hear all these endeavours in action :-https://www.mixcloud.com/springchickenrecords/scb-show-5-the-eskimo-chain-special-poetry-pedals-and-exclusive-tracks/

(((o))): What are you listening to at the moment? Do you guys have any obscure gems or friends’ bands you want to share with us?

Luke: We all share immediately with each other what’s been taking our fancy so should be able to answer for everyone here, Battles have been coming up a lot recently, Actress, Throbbing Gristle, Holy Fuck, Tortoise, Underworld, Portishead, Terry Riley things like this, we have a collective playlist for references to sounds we like within tracks so think along those lines. I’m sure everyone has their own gems going on too. I personally have been really enjoying Don Cherry this week, such wonderful music. I guess regular favourites like Broadcast, Aphex Twin, Clark, The Fall, Floating Points, Beak, Clinic, Radiohead are always about and artist we share a lot of passion for.

(((o))): For this kind of music I would always suggest Gnoomes, in violet, HEALTH, Gum Takes Tooth, Owl Vision and Rival Consoles, (how did Bjork not get a mention in this interview!?)as artists you may not know but, should. Thank you to Luke and Patrick for satisfying my curiosity, please do check out all of the great stuff they’re working on they’re both very talented artists and engineers in their respective areas of expertise.