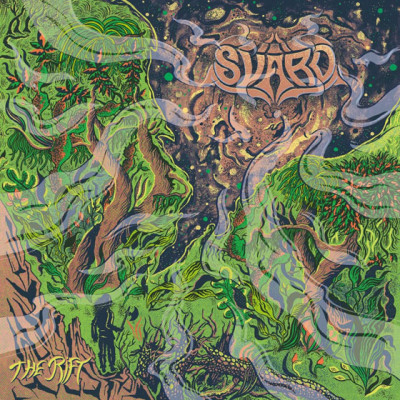 The Rift by Svärd

When the members of two different bands come together to form a new project, the results are often very worth listening to. Such is the case when members of Sweden’s In Mourning and Germany’s Ahab formed Svärd, offering up debut EP The Rift.

In sonic template, the two bands are quite different: Ahab create crushing funereal doom with songs frequently lasting longer than ten minutes, while In Mourning create brooding and (appropriately) mournful melodic death metal in the vein of contemporaries like Insomnium or Ghost Brigade. So to find out that members of the two bands combined to form Svärd was something of a surprise to this reviewer. But the results not only work, they work well.

The EP on offer is a sludgey slab of heavy riffs and doom-laden atmosphere, all rounded out with psychedelic flourishes – pretty much exactly what you’d expect from a collaboration between the two bands. Ahab’s drummer Cornelius Althammer brings a suitable amount of thunder to the kit, with the remaining three musicians all hail from In Mourning: Tim Nedergård and Björn Pettersson share guitar and vocal duties in an expansion of their normal roles, while former In Mourning bassist Pierre Stam gives the melodies an ominous underpinning. The overall sound might be sludgey stoner-doom, but the music goes off at such a pace that it sounds closer to In Mourning than Ahab. Furthermore, from the artwork’s green and purple design to the lysergic sounds of the intro track ‘Hallowed Grounds’ to the lush, sprawling, near-hallucinogenic closer ‘The Portal’, the EP is also suffused with psychedelic flourishes, elevating it above being a simple mash-up of the two bands. The frenetic tempo of the drums and guitars also indicates a hefty NWOBHM infusion: not quite the gallop of Iron Maiden, but there’s clearly influence from those hallowed axe-slingers at play here.

This is a project four years in the making, and as such comes with the possibility of feeling disjointed or sloppy and half-hearted like some side-projects can be. Svärd shove such concerns aside from the first explosive riff on ‘A Rift in the Green’ right through to the fading sounds of ‘The Portal’. The tight compositions, furious riffs, and excellent sound exhibit everything the members bring to the table and more without ever feeling like a moment is wasted. This is perhaps to be expected given that three members of the lineup have all been in the same band, but it’s still refreshing to hear such close-knit chemistry on a side-project. It also bodes well for the rumoured album the group will be putting out some time in the near future.

Is there a criticism to be drawn here? One could argue that this EP is over and done too quickly, and that is true. Perhaps one more song acting as an interlude might have pushed the listener’s response from ‘curiously intrigued’ to ‘excited anticipation and enjoyment’. But there’s also the risk of over-egging the pudding: The Rift is supposed to be whetting the listener’s appetite for a full-length album, which it pulls off perfectly.

All in all, Svärd’s first offering is an excellent one, and this reviewer is certainly looking forward to the full-length album whenever it arrives.