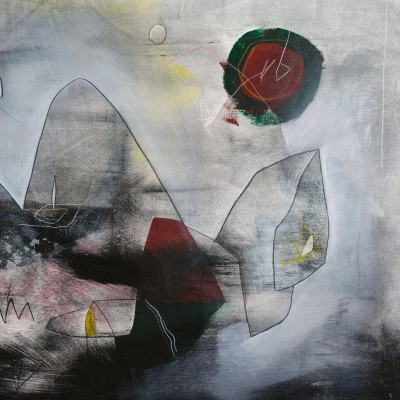 Walk It Dry by Sly & The Family Drone

Beloved noise botherers Sly & The Family Drone continue to stake out their own sonic territory on Walk It Dry, delivering their most concise and cinematic outing to date. Across eight relatively brisk pieces they explore a wider range of more fully realised moods. They still kick up a right old ruckus though. Straight out of the gate they let fly with the familiar churn and skronk, ‘A Black Uniformed Strutting Animal’ is an upbeat swinger, rhythms surging and sax a’ wailin’. It presents a distillation of their sound, a punchy declaration of intent. There’s an elephantine sway about it and the last minute is like a flock of honking geese taking flight into dub space. It certainly sets the scene.

Similarly the first track shared from the album ‘Shrieking Grief’ is a relentless assault of rapid fire snare rolls and frying electronic noise that could rasp the bark off a tree. It’s Sly at their most direct and confrontational. Between these two ferocious blasts they get a little weirder and more exploratory. ‘Dead Cat Chaos Magician’ casts a poison spell, a busy machine hive teeming against fierce sporadic outbursts of drums, a saxophone incantation slipping in and out of your attention. The short ‘Swearing On The Horns’ is a clutch of fidgety loops and effects. It’s a really nice little exercise in texture slightly overshadowed by its surroundings but it creates a moment of calm that allows ‘Bulgarian Steel’ to swing in with wicked intent. Steadier of beat it brings a kind of thumping low end grind that circles beneath the squealing sax, a dystopian junkyard jazz noir.

Following on from last year’s Gentle Persuaders, Walk It Dry is the second Family Drone album to feature the wild saxophone sounds of James Allsopp and it seems he’s had a galvanising effect on the band. Not just a mate they tapped to come and squawk along, Allsopp is a serious player with a string of impressive credits to his name. His playing here is more free than the Beefheart/Cravats lurch of his other band Snack Family and skillfully woven into the overall sound but, should we really start thinking of Sly as Jazz? The band have always been improvisers, their recordings all made live. Group improvisation is a challenge that requires a framework and unique discipline. The shorter, more focused, tracks they present here suggest new or more developed approaches to setting. Not that their method or whether we call it jazz really matters but it appears, perversely, that a little more structure has borne far more diverse results.

Also, I’ve found it hard to shake off the idea of Walk It Dry as some kind of corroded dream logic form of a crime jazz film soundtrack. Although I can appreciate the clues to that reading are buried, possibly in my own psyche as much as in the music. As good as the first half is, for me the second side is really where it’s at. It’s much less percussive but explores more varied moods and textures with great success. ‘Sunken Disorderly’ keeps up their way with a punning title but catches something about the feel of the track as well. A drowned pirate ship lament it’s all drones and whale sax on the floor of the ocean, the percussion a series of incidental effects. There’s a piercing teeth edge whine that comes through like a chill and it ends in low stillness as the sand settles out of the current to cover over your bones.

Nimble, rather than blastingly indiscriminate ‘My Torso Is A Shotgun’ may be the most complete demonstration of their mastery, working bass lurch and explosive drums into a rich patchwork of textured noise. The closing ‘Tsukiji’ finds us back in deep water and swirling submerged dub space. The most subdued and melancholy thing they’ve yet done, its soft drone is prodded along by accordion wheezes. They sway in the tide and wash away to the distant sound of voices onshore receding further still. A long way from the rhythmic assault we associate them with it’s quietly beautiful and an approach I’d like to see them develop further. Fresh and alive with ideas Walk It Dry finds Sly & The Family Drone really coming into their own and making their best, most ambitious statement yet. Still muscular and percussive but finding new possibilities, more room for the grit and the grain of sound.