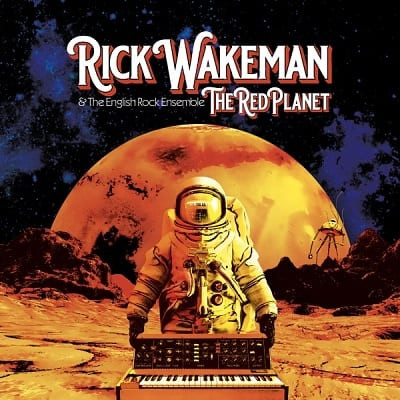 The Red Planet by Rick Wakeman

Rick Wakeman is no stranger when it comes to being perhaps one of the most influential artists in the history of the Progressive Rock genre during its golden era of the 1970s. From his time as a session musician working with bands and artists such as Elton John, Lou Reed, Marc Bolan & T. Rex, and Al Stewart to name a few. He found his niche when he worked with the late great David Bowie by playing the mellotron on his 1969 hit, ‘Space Oddity’. And playing piano on his fourth album, Hunky Dory.

It wasn’t until he found success with when joined Yes in 1971 after leaving his previous band, The Strawbs with the release of their fourth studio album, From the Witchwood. Now say what you want about the keyboardist, but Rick has been around performing and recording music for nearly 51 years now. Whether it’s with Yes or his time as a solo artist based on conceptual textures from The Six Wives of Henry VIII, Journey to the Centre of the Earth, The Myths and Legends of King Arthur & The Knights of the Round Table, and one of my favorites, 1984.

Rick is not only just a keyboardist, but he also has a great sense of humor. He also produces and presents both on TV and on the Radio whilst writing two books from 2008 and 2011 entitled, Grumpy Old Rock Star: And Other Wonderous Stories and Further Adventures of a Grumpy Old Rock Star. There’s one thing I had forgotten to mention about Rick Wakeman that deserves some recognition, and that’s his time when he and keyboardist Tony Ashton hosted a TV show on Channel 4 in the U.K. called, Gas Tank.

It aired from 1982 to 1983 where the guest artists would join with Rick and his house band and perform re-arrangements of their hits they’ve done during their heyday in the 1970s. He would interview the guests in a setting of a bar where he would talk to people like; Suzi Quatro, Steve Hackett, John “The Ox” Entwistle, Dave Cousins, Cockney Rebel’s Steve Harley, and Eric Burdon of The Animals to name a few. It is worth checking out on YouTube.

That and his latest release this year entitled, The Red Planet with his backing band The English Rock Ensemble, showcases Rick’s return to his heavier keyboard sounds that he did during The Six Wives–era. And it shows that Rick himself is not showing any signs of slowing down. Released on the R&D Media label, The Red Planet is quite the journey to embark on.

So be prepared to embark on this amazing adventure of Wakeman’s return to his roots with his orchestral and harder approach. Now this isn’t the first time that Rick is heading back into the Outer Limits again. He’s done it three times with his previous albums; No Earthly Connection, 2000 A.D. Into the Future, and Out There. For Rick, his chance to go back to the outer limits once more, it’s like an epic movie that is finally been reborn.

From the church organ making this alarming effect on the opener, ‘Aseraeus Mons’, it sets up this scenario for the rocket ship to engage for lift-off as Lee Pomeroy and Ash Soan sets up the countdown to X Minus One with a bit of fanfare to the twist. Once you have the Mellotron choir coming in to give our heroes a big send-off, Rick’s keyboards climb towards our solar system.

Both the ensemble and Rick work together like a team to discover what kind of mysteries that the terrestrial planet has in store for us before Colquhoun’s guitars cries out to the gods in a climatic landing to the surface. ‘Tharsis Tholus’ features these cavernous atmospheres with an odd time signature that channel the Grand Wazoo himself, Frank Zappa. I love how Rick takes his organ as he climbs upwards as he switches to the Moog and honor two compositions; Del Shannon’s ‘Runaway’ with Max Crook’s “Musitron” (Clavioline) on the midsection, and ‘The Cinema Show’ by Genesis.

Once you get to ‘Arsia Mons’, you can feel the marching rhythm right behind you as it sets the tempo up to continue with the mysteries with Dave’s acoustic guitar to set up the calm after the storm. It gives him a chance for Rick to cool down on his synthesizer while understanding that they will have an uphill battle before this eruptive sound comes in with a big gigantic as they follow the evidential background.

‘Pavonis Mons’ is Rick’s tip of the hat to both the Glam Rock sound and the Italian Progressive Rock genre between Kayak’s ‘We Are Not Amused’, Premiata Forneria Marconi, Banco’s Io Sono Nato Libero, and Metamorfosi’s Inferno. He knows which direction he wants to go into from point “A” to point “B”. The adventure that is happening on Mars is nearing its completion for the ensemble.

And having a bit of a Henry Mancini-sque section thrown in for the piano, Rhodes, and synthesizers with a bit of the Mellotron, it becomes a workout session with some foot-stompin’ grooves. The closing 10-minute track, ‘Valles Marineris’ is Rick honoring Gustav Holst’s ‘Mars, The Bringer of War’. With a little help between Ash’s militant drum work, Lee’s bass and Dave’s electric guitar work as they prepare the ride home back to earth.

Part heavy and part symphonic, you can feel the energy flowing between each member of the band as they have accomplished their mission on Mars. Now this took me a while listening to Rick Wakeman’s The Red Planet. And here are my result towards this.

I have to say that I was really, really impressed with Rick’s new album. Understand, his work can be challenging at times whether you get it or you don’t. But it is an accomplished voyage that he let the listeners embarked on. Yes, this album will divide a line in the sand whether the Prog community will accept the new album or not, but Rick Wakeman himself is a true visionary, a maestro, and a storyteller that has brought The Red Planet to life.