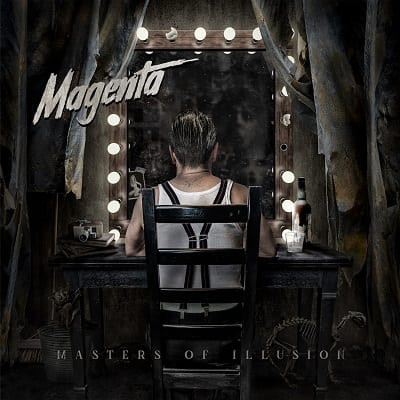 Masters Of Illusion by Magenta

For me, Magenta has been one of my favorite Progressive Rock bands to come out of Wales. I first discovered their music back when I was a student in College in January of 2008. They’ve never disappointed me with some of the releases they’ve unleashed including Seven, Chameleon, The Twenty-Seven Club, and We Are Legend. Since their formation in 1999, they are still growing stronger and stronger each time they put out an album. And I know right there and then, my ears are waiting to see what they would come up with next.

That and their latest release Masters of Illusion which is released on the Tigermoth Records label, tackles the themes of the six masters from the Horror genre. From Christopher Lee, Ingrid Pitt, Peter Cushing, Vincent Price, Lon Chaney Jr, and Bela Lugosi, this album was a big challenge for me to see what they’ve done on here.

While Magenta have tackled different themes in their previous albums including the first seven parts of Dante Aligheri’s nine circles of hell, and the tribute to the masters of rock and blues who died due to either drugs, depression, and fame at the age of 27, Masters of Illusion is a wonderful themed album honoring those masters in the horror industry. Listening to this album, Magenta not only carry the symphonic structures, but adding some of the real good pop formats from the mid-to-late ‘70s thrown in by moving into another direction and letting their fans know that they’re more than just a Prog-Rock band.

‘Reach For The Moon’ tackles the story on Lon Chaney Jr. The keyboard strings, bell tolling’s, and the cries from Chris Fry’s guitar, tell the story on The Wolf Man. You could tell that while he was famous for being the son of one of the most amazing silent actors and stage performers, it sometimes can be lonely at the top to try to be more than just your famous father.

Peter Jones’ sax helps out in the midsection by going through the textures of Dick Parry and John Coltrane while he lifts up his instruments to give Christina Booth and Fry’s bluesy guitars to set the detail on what Lon was going through. Chris takes lead while Reed uses his organ, synth, and the mellotron by following him. It’s quite an adventure at times before Lon’s drinking problem comes into the foreground.

You have this mournful medieval turned dramatic string section as Booth comforts the listeners that while Lon had a hard time, he will shine brightly for the next generation to follow in his footsteps by howling at the moon once more. The opening track ‘Bela’ starts off with an ominous string sequence with an entrance to Dracula’s castle before Magenta tip their hats to the themed introduction of the 1940s radio drama, Suspense!

The music details on Lugosi’s big break with Tod Browning’s Dracula, he was type-cast in that role and delved into a darker side with drug addiction, and appearing in ‘50s B-movies with director, Edward D. Wood Jr. The arrangements that are on here see Magenta returning back to its roots from the Home-era. It goes into the blue skies as Reed’s keyboards and Fry’s guitar goes up and down while Dan Nelson teams up with Rob’s acoustic guitar before it turns very sad for Lugosi during his final years.

‘A Gift From God’ is a tribute to the late great Christopher Lee. Magenta turns this song for the first minute and forty-seven seconds into this folky-sque waltz before going into the structures between Premiata Forneria Marconi, The Alan Parsons Project, and Anthony Phillips’ The Geese and the Ghost. Lee was more than just a part of the Hammer Horror genre, but achieving the roles such as Lord Summerisle in The Wicker Man, Count Dooku in the prequel Star Wars trilogy, Saruman in both the Lord of the Rings and The Hobbit trilogy.

Not only that, but serving his country in the Royal Air Force during World War II. He had achieved the success and finding out who he really is while Magenta travel down the roads of the Electric Light Orchestra with ‘Snow’. With this ‘80s arena rock vibe, the story of Ingrid Pitt starts out rough when she was young by being imprisoned with her family at Stutthof Concentration Camp. The band goes into the story by showing not only what she went through, but Ingrid always wanted to be in the film industry as an actress.

Elsewhere, ‘The Rose’ is a tribute to Peter Cushing. With this Waltz-like intro of Jethro Tull’s ‘We Used to Know’, Reed channels some romantic melody structures on his acoustic guitar. The name came from Cushing himself after his wife Helen passed away on January 14, 1971. Peter, by this time, was semi-retired from the film industry in 1985. While he became a regular on Terry Wogan’s chat show on the BBC in the mid ‘80s, Cushing wanted to remember his late wife by naming it, The Helen Cushing Rose.

The arrangements on this composition, see Magenta towards the Genesis route before making a soft landing into this lovely classical string section as the closing title-track clocks in at 16-minutes, honors Vincent Price. I can imagine that Christina Booth goes into the lyrical structures of Peter Hammill as they channel between more of not just P.F.M., but Le Orme.

You can hear these marching sections and ascending beats with a nod to Starcastle into the mix with a bit of the slap-and-pop bass sequence as the keyboards and guitar lines set up his story by bringing it full circle in the last 2 minutes. As if Thelonious Monk had jammed with Yes for a brief second while Fry returns to the center stage once more on his wah-wah pedal and channeling Lindsey Buckingham.

Masters of Illusion again took me a long time during the whole week on whether I was going to accept Magenta’s latest release. And I adore what they’ve accomplished. This was not only a big challenge, but a huge one instead. Magenta always channel their listeners with their music. And with this album, I would love to think that six masters in the horror genre, would be thrilled to have this album dedicated to them.