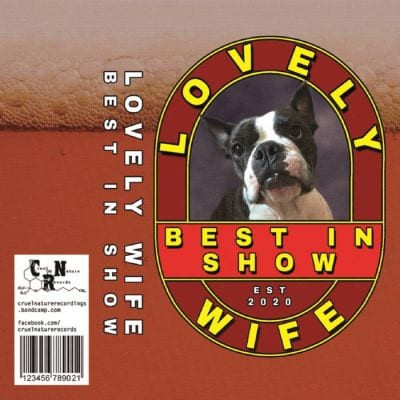 Best In Show by Lovely Wife

There is a song going round and round in my head right now. It’s Prince’s ‘Purple Rain’ – a fine song, to be sure, but it won’t go away and it’s beginning to annoy me. I need something to blow it away. Enter Best In Show, the new record from the North-east’s favourite hit machine™, Lovely Wife. Who are, for the noobs, bass-murderer Joe Garrick and ‘singer’/general noise maker James Watts and whomsoever else they can rope in as and when required. That being, in this case, drummer Rob Woodcock of Fret! and lots of other noisy bands from the top right corner of Englandshire.

Lovely Wife mostly do their thing live and made up on the fly, offering lengthy, spiralling, abrasive, sludgy/doomy/droney headfucks. My own lovely wife hates them. I don’t. When Joe sent me the record, he implied that it featured a selection of shorter songs, less sprawling, more focussed, so I was expecting something not unlike a Geordie Melvins album. Did I get that? My arse, I did.

I mean, just look at the first song, ‘Ioniser’. It’s 23 minutes long, it has a swirly droney intro, unhinged honking from Watts on bugle (or maybe it’s a flute1), an relentless, bowel disturbingly distorted bassline which might just have two notes in it, Captain Caveman vocals, everything which makes Lovely Wife what they are, and it’s really, really good. But it’s definitely NOT concise.

OK, so, having established that its business as usual on this record, and that it’s NOT going to be all short songs, I’m proved wrong by a run of three short(er), sharp stabs in the face. We have ‘My Cup Overfloweth’, a headlong, barely-in-control tumble of bass and drums which seems to be trying to run away from the lurching, oozing tar-beast that is ‘Shan Patter’. Skipping along in the rear and giggling maniacally is ‘Shenanigans’, a stabby little thug of a tune.

We’re back to the long stuff for the rest of the record now, starting with the appropriately titled ‘Wallow’, which sounds like the ultimate funereal doom with all of the frilly stuff like guitars and actual tunes and lyrics about witches removed, and then slowed down a bit. Watts’ bugle at the beginning sounds like a soul in torment. The soul of a cow, perhaps, but tormented nonetheless. If your heart functioned at the same BPM as the bass here, you’d be dead. Or in a very bad way, at least. Does all of that make it sound like a bad song? Well, it isn’t.

And finally, we have ‘Horn’ – scritchy, scratchy rustling noises followed by a bass riff so fat it would ruin your furniture if it came to stay at your house. So massive it could pull passing asteroids out of their orbits. This riff is large. It would be difficult to find trousers to fit this riff. Watts’ regulation moaning and gibbering vocals are largely absent here, replaced – as you might expect from the title – by Watts’ moaning and gibbering (and honking and wailing) bugle. This may or may not mean much to you, Gentle Reader, but the bass here reminds me of a song called ‘Skew..Ard‘ by the New Zealand post-rock band Jakob, in that it sounds like a colossal uncaring robot stalking through a post apocalyptic landscape of ruins, crushing everything in its path, and slowly disappearing into the distance. Dunno, maybe it’s just me, though.

The Bandcamp blurb tells me that Best in Show features a ’contact-mic’d exercise ball’. I regret to say that I have no idea what that sounds like, and consequently can’t point it out to you. I’ll just accept it and claim that the record would be a shadow of itself without it. Probably.

Anyway, this is a damned fine sludge/doom/drone record, and inarguably one of Lovely Wife’s best2. It feels tighter, maybe, than their previous work, as if it’s less improv than usual. A bit more ‘prepared’, maybe. Unless, of course, they’re just getting better at what they do. I approve of the shorter, snappier songs, but I’m still here for the big stuff.

Well, there you go. Due to my rather lax reviewing practices, Best in Show is out already, so head on over to Bandcamp and buy it right now.

P.S. ‘Purple Rain’ is now gone, presumably hiding and shivering in terror under a cupboard somewhere. Job done, I guess.

FOOTNOTES
1. It’s not a flute, it’s a bugle. That was an old E&D in-joke. You probably had to be there…
2. The only thing I don’t like about this release is the cover art. It’s got a dog on it. I don’t like dogs.