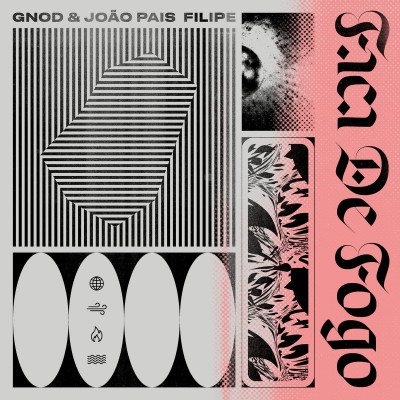 The ideas came together pretty easy. We were focusing on just being simple with it and following the flow. We decided to take two of the tracks to mix in Manchester while Joao Brandao (the engineer for the sessions) mixed the other two at his studio in Porto.

Ahead of the release of Faca De Fogo, the new collaboration from Gnod & João Pais Filipe, in the process of reviewing the album for Echoes And Dust, I’ve mulled over some queries for the artists involved to share with you all as the album is prepared for its various methods of release. Gnod co-founder Chris Haslam (CH) and João Pais Filipe (JPP) were the interviewees for this extraction.

(((o))): The most obvious question to ask is how did this collaboration come about? Was it a remote recording process or were you physically together in the studio? I’m also interested to know about the writing process, whether this was a case of sending each other layers or working to written parts or if it pure improvisation. The sound of the album and my experience of having been lucky enough to play a set with Gnod R&D, makes me wonder if this was a kind of directed approach of peaks and troughs with forecasted moments but, how cohesive it sounds overall, really makes me wonder.

CH: We met Joao through our Porto friends at Lovers & Lollypops who also run Milhoes De Festa. He plays a style we’ve always admired so it made sense to collaborate on a recording. Lovers & Lollypops set up a week in Porto for us to jam, record and play a show and the formation of the tracks on the album all came about during that week. The process was to jam for a couple of days (I think it was from Tuesday – Thursday), play a show in Porto on the Friday and lay down what we had on the Saturday & Sunday. The ideas came together pretty easy. We were focusing on just being simple with it and following the flow. We decided to take two of the tracks to mix in Manchester while Joao Brandao (the engineer for the sessions) mixed the other two at his studio in Porto.

(((o))): For me, ‘Faca De Água’ was the track that seemed the most surprising, there’s a lot of really gnarly sounds on the album, but the main synth/keys at the start of this track is one of the sweetest things I’ve heard in quite a while, how did that come about?

JPP: All the tracks are very different from each other on the record and on this one we decided to have a more electronic, so to say, approach. Personally, I love to play with sequencers. It’s accuracy and precision really fascinates me. Also in my drumming on this one I have played in a more, minimal, machine, techno style on one hand and on the other hand literally using some African Rhythms mixed with some Odd Rhythms.

CH: We brought a few different toys over to Porto to play around with. I think the synth noise you’re referring to on the album is a little noise sequencer that Raikes (Raikes Parade, a frequent producer and band member of the wider Gnod Gnetwork) brought with him. He started the sequence and we all joined in on it & it happened just like that without much thought.

(((o))): Were there certain influences that you were working under or an ideological common ground? The album’s title does seem to suggest some environmental or philosophical introspection.

JPP: The conceptual part of the record was mostly conceived by Paddy which I find it quite beautiful.

(((o))): I find that unsurprising. I feel like with that said, it’s not necessary for me to chase Paddy for one answer and will allow the readers like myself to ponder or research further the spiritual or philosophical aspects of this music themselves.

(((o))): What gear were you guys using, were there certain things you chose to favour or avoid? Could we potentially get a rig rundown?

(((o))): People in lockdown could probably do with some new music to listen to, what stuff are you all listening to at the moment and do you have any obscure gems to offer our dedicated readers?

JPP: Mostly I have been listening to ethnic music. Mostly from the Balkans and Turkish as well.

(((o))): Another question that is probably quite predictable, but no less pressing, what comes next for each project? Are there any plans to work together again exploring new territory?

JPP: Yes, for sure we will make more records in the future.

CH: We plan to play live with this project at some point. We were down to premiere it to the UK at Supersonic this year but that’s obviously fucked now. However, IMPATV & myself, and also Pedro Fonseca (a filmmaker from Porto) have made a video of visuals for the album (keeping in with the Manc/Porto collaboration). It will be streamed on their website on what would have been when the festival was due to take place – the 17th & 18th July. See the Supersonic Festival website for more details.  x

Thank you to the interviewees for satisfying my curiosity, it’s great to hear that there will be more coming from this collaboration. Stay tuned for my review of Faca De Terra which will be following this interview onto the website.