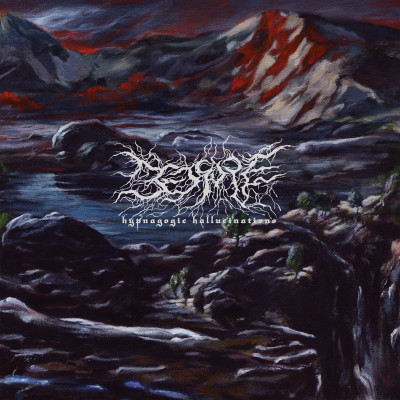 Although it’s now not unusual for demos to be far more widely heard than a decade ago, due to the wonderful world of Bandcamp (and even streaming services like Spotify), it is still exciting when one is universally raved about. So, it transpired, in 2018, that a two-track from a band hailing from Rome called Bedsore, became much discussed on social media and that anyone with an interest in esoteric death metal was most likely going to start an online conversation with “By the way, have you heard…”

The excellent 20 Buck Spin unsurprisingly came across it too and so, very quickly, Bedsore have enjoyed the backing of a widely respected label. With a critically lauded two-track demo in tow, their debut album has been highly anticipated for quite some time indeed. The question is, does Hypnagogic Hallucinations deliver on that promise, and will Bedsore double down on such an illustrious start to their discography? The honest answer is probably unsatisfying – yes and no…

The frustrating thing about the album is that the best two tracks are those that appeared on the demo. ‘At the Mountains of Madness’ and ‘Brains on the Tarmac’, albeit re-recorded – and it should be noted, slightly reworked, too – are the standard bearers for Bedsore’s debut LP and also contribute to nearly half of its’ running length. That said, however well dispersed and thought of the aforementioned demo was, it still won’t have found its way to the number of ears a debut record being released on 20 Buck Spin will do, and the tracks are still fantastic, exploratory, mind-expanding death metal perversions. Indeed, the reworking of both only make them stronger and highlight how far Bedsore have come since that demo was uploaded to Bandcamp two years ago.

The band straddle a line somewhere between the progressive, kaleidoscopic death metal that Morbus Chron and the new project born out of the former’s dissolution, Sweven, exemplify, and the languid, opaque psychedelia that has crept into a fine batch of recent death metal releases, from artists such as Nocturnus and Gigan.

The approach to production on Hypnagogic Hallucinations is happily not to simply overwhelm the listener as is so often de rigueur in the genre, but rather creates a balm around the tracks to allow their intricacies and eccentricities to truly be heard. It is, in this stylistic choice, reminiscent of Blood Incantation’s most recent record, whereby the sheer depth and craft of the compositions are exemplified. The whole album is very well measured in its production values throughout, with only an odd moment on the organ in ‘The Gate, Disclosure (Intro)’ sounding extremely blown-out to my ear. A minor criticism, but on persistent re-listening, it is the only overt sonic blemish on a record that sounds remarkably clear despite the aural complexity writhing within.

The true issue with Bedsore’s debut is that it seems to start with a lack of confidence and no small amount of trepidation. Opening with the aforementioned instrumental that inexplicably lasts a whole four minutes, Hypnagogic Hallucinations doesn’t have the most auspicious beginning. The synths, which nowhere else on the record sound awkward, introduce themselves as just that; it’s all a little overwrought, putting me in mind of my least favourite elements of prog rock, and quietly introduces the incipient thought that Bedsore might not have hold of the necessary reigns to commute their more questionable, exuberant flourishes. I’ll spare you the panic – that concern is unfounded. The last minute and a half of ‘The Gate, Disclosure’ is gentle and yet exudes an underlying menace, and I wonder if it had been cut to just this, sans previous bombast, the intro would have had more resonance and delivered the desired effect.

We then launch into first track proper, ‘The Gate, Closure (Sarcoptes Obitus)’, which, after repeated listens, provides more of a punch than it did on first airing, but still doesn’t stir the blood as much as the album requires of it. The song features some interesting diversions, but none of these ideas are explored enough in its short runtime to merit, or indeed inspire, much reflection. So far, so frustrating… No momentum picked up thus far…

‘Deathgazer’ follows and feels like an immediate improvement, with ideas followed through to fruition and subsequent payoff, despite a similar length of time elapsing on the record. This track, as opposed to the former, feels purposefully direct and surges and rages with a candour of which we have been previously bereft. It is potentially the most vitriolic moment on Hypnagogic Hallucinations. The most euphoric, on the other hand, is served courtesy of the track that serves as the spine of the record; the previously mentioned, Lovecraftian, ‘At the Mountains of Madness’. It is a dizzying feat – a dynamic blend of numerous substrata of death metal and feeding in other extreme genres, too, creating an acidic nine-minute cocktail that remains Bedsore’s crowning achievement to date.

The bizarrely titled ‘Cauliflower Growth’ and roll-off-the-tongue chart-hopeful ‘Disembowelment of the Souls (Tabanidae)’ both clock in at six minutes and form the major new material Bedsore have to offer, beside ‘Deathgazer’. Here, the four piece allow their music to breathe in the same way the songs’ construction on the demo did. Ideas don’t feel packed in, but diffuse, with eerie leitmotifs and desperate summoned howls, spiralling in and out of prominence on their associated tracks’, in bewitching and mind-altering ways. Although not reaching the heights of ‘At the Mountains of Madness’ these two tracks begin to deliver on all of that promise that was so apparent.

‘Cauliflower Growth’ introduces some old-school heavy metal with prominent synths (treated subtlety this time), creating an even headier mix than usual on prior songs and injecting a timeless, lachrymose quality to the track. The melding of genres never creates the unholy mess lesser hands so often do and pays testament to the supreme songwriting and production Bedsore have employed. ‘Disembowelment of the Souls (Tabanidae)’ is a swirling maelstrom, the more frantic and pervasive of the two, reminding me a little of Horrendous, with the heaviness of their playing burgeoning beyond the speakers. Accomplished, complex, yet not without riffs that inspire wind-milling, it’s an adrenaline shot to the heart. ‘Brains on the Tarmac’ then closes the album, a glorious track, biting and snarling, the drums shocking the ear when veering into D-beat territory, before then falling away into a cinematic, panoramic close, until it surprises once again with a outro that wouldn’t sound out of place on The Sword’s back catalogue. A strange, but oddly fitting, end to a deeply interesting album.

Hypnagogic Hallucinations is a fine record and had expectations not been so high from THAT demo, it would surely have hit the death metal scene squarely between the eyes and caused great waves (and probably still will). But, with a stumbled start and featuring previous material, Bedsore’s debut album may feel to some like a strange case of having to delay gratification once again, whetting the palette for something extremely special further down the line. Although this LP has room for improvement, it is also very impressive – one has to constantly remind oneself that it is indeed, a debut – and that although their lyrical preoccupations and disquieting artwork may suggest otherwise, the future for Bedsore is resolutely bright.