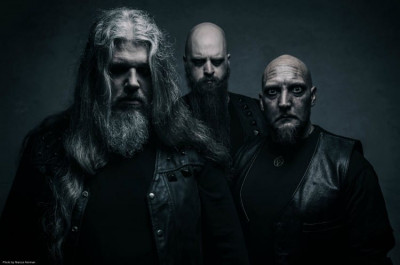 Since all of the songs deals with death in one way or another we found the title Cerecloth to be very fitting to the whole album.

Naglfar are a Swedish melodic black metal band who for the past two decades have been creating epic and sweeping black metal soundscapes and the band’s latest album Cerecloth is no exception. Gavin Brown caught up with Naglfar guitarist Andreas Nilsson to hear all about Cerecloth, the video for Vortex Of Negativity, keeping busy during lockdown, memorable live gigs and essential black metal albums.

E&D: Your new album Cerecloth was released recently [check our review here]. How did the creation of the album go?

Andreas: Slow, I would say. Our usual modus operandi has always been that we meet up at Marcus’ studio and write together. But as the years passed we found it more and more difficult to schedule these kind of sessions due to other obligations like work and family. Other distractions that caused the process to slow down was that we were continuously offered live shows and the fact that we had fulfilled our obligations to Century Media, so we didn’t feel like we were in a rush. Then, maybe two years ago Century Media reached out and mentioned that they were still interested in working together and that if we had something we were working on we should start to focus on that. Which we did, and finally here we are.

E&D: The album is extremely heavy but balanced by a calming albeit macabre atmosphere. Was that your intention with how you wanted the album to sound?

Andreas: When we start to write we usually don’t have an idea set in stone. The first songs that we feel are keepers usually sets the tone and a general idea starts to form. This time we thought we had a concept ready, but halfway through we realised that it didn’t fit the songs this time around and thus Cerecloth came into life.

E&D: It also both fast and slow songs, did you always want a balance between the two styles?

Andreas: Ideally you have a balance, but the quality of the material is what decides whether it is kept or not.

E&D: What subjects do the lyrics on the album deal with?

E&D: You have done a video for the song ‘Vortex Of Negativity’. Can you tell us about both the song and the album?

Andreas: The song deals with the lack of sense of belonging, and the wish for an escape. The video was recorded here in our hometown during 2 days by the talented Jacob Arevarn of Arevarn Films. The video has a very apocalyptic feel to it.

E&D: Do you think that it is now very representative of what is going on in the world now?

Andreas: I think the songs on the album in general makes for a suitable soundtrack for current times.

E&D: Can you tell us about the albums title and its striking artwork?

Andreas: Since all of the songs deals with death in one way or another we found the title Cerecloth to be very fitting to the whole album. Cerecloth is a waxlike fabric that were used to wrap the bodies of the deceased. When we talked to Kristian Wåhlin about a possible collaboration he asked about the title and the background of the lyrics for some inspiration and I must say that I think he succeeded in capturing the atmosphere of the songs perfectly.

E&D: What has the reaction to Cerecloth and the material you’ve released so far been like?

Andreas: It has been very good feedback so far both from reviews and supporters. Usually I try not to bother too much about others opinions when it comes to our music, but this time around I was a bit concerned that we might have been forgotten. This does not seem to be the case.

E&D: It has been eight years since your last album. What has been the reason for such a long gap between that album and the new one?

Andreas: As I mentioned in the beginning of the interview, there were several reasons, but as soon as they were sorted things started to move pretty quickly. For being Naglfar that is.

E&D: Did you feel any pressure from others the new album given the amount of time that has passed?

Andreas: Not pressure, but more the thought that people who had been into our music might have moved on. When it comes to writing the music only the opinions of Marcus and Kris matters to me.

E&D: How are you keeping busy during these crazy times?

Andreas: Hanging out with my family. I also read, listen to music, answer interviews and play guitar. And take walks. A lot of walks.

E&D: Are you working on any new musical ideas at all?

Andreas: As I currently am involved in 3 bands I write material on a regular basis. When not writing for Naglfar I put a lot of effort into my other band Malakhim, and since 2018 I also have a solo-project called Occasum that I can put all my ideas that are more in the vein of death metal. So I try to keep busy.

E&D: With all live dates off the cards for the time being, do you have any plans to reschedule at all yet?

Andreas: Of course. Most festivals that were booked have been rescheduled and we are also looking into doing even more live appearances whenever this situation in the world is under control.

E&D: What has been the most memorable Naglfar live performance that you have ever done?

Andreas: There are several, so it’s hard to pick one. The first time playing a big festival like Wacken was a surreal experience that I will never forget. Or those odd gigs like when playing a tourist resort or a squat outside of Paris with animals walking around the backstage area.

E&D: How did you get into metal in the first place?

Andreas: It was an older brother of a friend. I was around 7 or something like that. He played me the Too Fast For Love album by Mötley Crüe. After that I was lost.

E&D: What were your first tastes of both death and black metal?

Andreas: I think it was Morbid Angel, Altars Of Madness and Darkthrone, A Blaze In The Northern Sky, respectively.

E&D: What are your essential death and black metal albums?

Andreas: There are so many. Those I mentioned of course, but also Deicide’s debut album, Mayhem’s De Mysteriis Dom Sathanas, Emperor’s In The Nightside Eclipse, Immortal’s Diabolical Fullmoon Mysticism, you know. The classics.

E&D: What is the rarest album in your collection?

Andreas: I keep no track of the value or rarity of my collection, but I have recently started to add it to Discogs just to get some order going on. To my surprise I’ve heard that some CDs from the nineties apparently has some value, and I’ve kept most of the albums I amassed during those days. So there are probably some gems in there.

E&D: What was the first album you ever bought and what effect did it have on your musical path?

Andreas: My dad bought me albums on cassette so I had a lot of those, but my first bought album for my own money was Iron Maiden’s Killers. I guess the idea to use twin guitar harmonies rubbed off.

E&D: Who is your biggest influence as a musician?

Andreas: I don’t think I have a specific musician as an influence. But guitarists like Andy Larocque and Trey Azagthoth blow my mind.

E&D: What are the origins of Naglfar as a band?

Andreas: The seed of what later became Naglfar was started by Kris and then vocalist Jens at a youth centre back in our hometown around 1993. Things kept rolling and here we are 27 years later.

E&D: How do you think that metal has changed since Naglfar first started?

Andreas: Well, the internet made the music more accessible for one. Everything is available click away so I think bands have to work harder today to keep people’s attention.

E&D: What are your main memories of when the band began and the Swedish metal scene at that time?

Andreas: We lived up north and therefore felt somewhat separated from the rest of the scene, but what comes to mind is a sense of excitement and dedication. Everything felt new.

E&D: What have been some of the highlights of your time in Naglfar to date?

Andreas: To be able to release our first album. To be able to go on tour with bands you listened to growing up. To play festivals. Meeting supporters from all over the world, the list goes on and on.