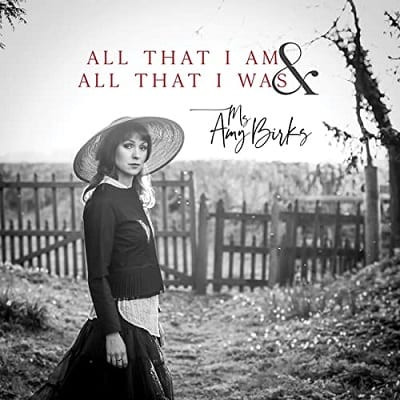 Back in 2017, I discovered one of the most incredible trios on both of their bandcamp website, and in an issue of PROG magazine. That was Beatrix Players. Their debut album, Magnified was quite an ear-listening experience for me. For them to take the genres of Chamber, Classical, and Folk music into one giant circle, it shows that Amy Birks can take it up a notch with her debut solo album released this year.

All That I Am & All That I Was showcases Birks by taking the Olympic Flame and lighting the sacred fires before starting the album off. The structures on her debut solo album tackles the subjects of betrayal, loneliness, confrontations, and the struggle to carry on. Amy is taking the listener throughout a lifting yet heartbreaking scenario through the entire album from start to finish.

‘Say Something’ is Amy’s nod to Purson’s Rosalie Cunningham as she sings the song in the waltz-like style of ‘Rocking Horse’. The lyrics deal on the subject of domestic abuse once more, but fighting back and standing up for yourself. I can imagine the characterizations in this song are confronting the attacker and showing the damage they have done to her many years ago. And this time, there’s no turning back.

‘Jamaica Inn’ is about moving forwards. The music has a bit of a nod to iamthemorning’s Lighthouse-era as Birks channels Marjana Semkina’s arrangements in her vocals. The struggle with being used in this mournful insanity that they went through, the location is a place for comfort, and peace against the thunderstorms they went through.

‘I Wish’ features Steve Hackett’s flamenco guitar work as he sets up the dance and beats for Amy to set up this mid-tempo groove with some expressive exercises that she gets into by dancing until dawn. While ‘Unlike the Heart’ sees the piano and string section going through whatever they went through during those rocky and tricky times. Amy lets the person know that this will be the start of a new beginning.

‘More’ has a bit of a nod to the Acid Folk sound with a gentle and stronger atmosphere. I could tell that there is some strong resemblance to the two albums and four of the masters of the genre; Trees’ The Garden of Jane Delawney and Spirogyra’s first three albums. Along with Barbara Gaskin (Spirogyra), Celia Humprhis (Trees), Clodagh Simonds (Mellow Candle), and Vashti Bunyan that Amy tips her hat to.

‘With All That I Am’ tackles betrayal and divorce. Birks shows an intense side that you’ve never heard before. This is a side you do not want to cross. The confrontation of her loved one being with someone else, is like a ticking time bomb waiting to happen. You can feel the piano and flute section’s raising the heat gauge level as high as it can go while Amy goes into her operatic side, it shows that she’s had enough of the bullshit, and enough with the lies that her loved one is making up excuses. And this time, she’s leaving this person for good.

I can imagine that Amy took a lot of inspirations from Sweet Billy Pilgrim’s ‘Slingshot Grin’ for the song to go deeper and farther than you can ever imagine. This was a big, big, BIG challenge for me to listen Amy Birks’ debut solo release. It took me a good long time to decide whether or not I was going to accept All That I Am & All That I Was. But after listening to this album a few more times, Amy nailed it down to a “T”. As I’ve mentioned earlier, this shows the challenging subjects that go beyond the Beatrix Players vision, but with a pop, folky, and carrying that classical approach, Amy Birks has spread her wings to fly.