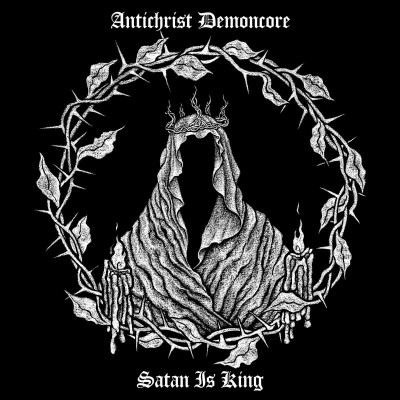 Satan Is King by ACxDC

AcxDC or Antichrist Demoncore are a band who take the power of grindcore, powerviolence, hardcore, whatever you want to call it and turn it into their own songs for their own pleasure and listening to their music will leave you bewildered and wondering exactly what has hit you. Their latest album Satan Is King is fifteen songs in twenty three minutes worth of pure intensity and it sounds utterly glorious, a short sharp shock if ever there was one!

ACxDC have been uncompromising since the get go, there is no doubt about that, but they have seriously upped the ante with this album and as the band blasts through each of its fifteen songs, you will be in awe of the power of Antichrist Demoncore.

Satan Is King is a thoroughly relentless journey into the music of ACxDC and the band don’t hold back at any point on this album, with songs like ‘Turncoat’, ‘Urban Blight’ and ‘Revenge’ sounding like a full on punch to the face in sonic terms, while other equally unhinged tracks like ‘Copsucker’, ‘Come Out Fighting’, ‘Black In Black Bloc’ and the closing ‘Maggot Museum’ demonstrate exactly why ACxDC are held in such high regard. And that high regard is definitely justified, this is music that sounds like an aural brick through the window.

Satan Is King is exactly what’s needed at this time of uncertainty, it’s a nonstop assault on the senses that is cathartic and uplifting in its outlook and its heaviness. Listening to this album is a cleansing experience for sure, it’s an unflinching collection of music that will energise whoever is lucky enough to come into its path and you will struggle to hear another album this year that is this full of hate and power. The band turn that hate into something positive though and that is the best thing about ACxDC and Satan Is King.