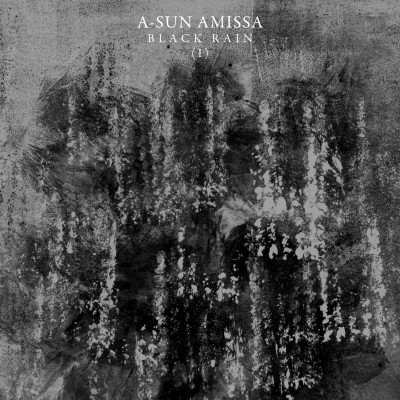 Black Rain (I) by A-Sun Amissa

A-Sun Amissa has been a musical project I have followed with interest since its inception in 2011. Formed by Richard Knox (Shield Patterns, Glissando and founder of the excellent Gizeh Records), the name has often been synonymous with collaboration, with a whole host of different, extremely talented artists having contributed to A-Sun Amissa’s discography to date. Richard has always remained at the eye of the storm however, directing the darkness and the light, and with new record Black Rain (I), peacefully resides there at the core as the rest of the weather fades, dulls and recedes.

This new effort – three tracks, all around the fifteen-minute mark – feels like going back to the most basic organic elements and central tenets of the project. Back are the sprawling, sometimes formless textures. Back is beauty rendered from the void. However, this release does mark one keen departure. The past few records – 2018s Ceremony in the Stillness comes to mind – felt very much written and constructed. Precise, deliberate; tethered to concept. Black Rain (I), we are informed, was written in the first three months of 2020, with Knox setting a monthly deadline for the completion of each track. But I sense, even without this information, one could, as dedicated listener, feel the freedom and the space exhibited in these three tracks. This is not to say that there isn’t any thoughtful composition at work here – there clearly is. But the tracks feel unencumbered by any trace of meticulousness or becoming overworked. In that sense, it can feel like a supremely rendered and recorded live album. I can almost feel the sounds pulsing around me as I stand at the front, lost in the noise.

The record opens with ‘The Sea’s Collapse’, gently painting the scene of the ocean’s inexorable outward tide. Mourning such a passing in much the way Mogwai might construct the most ambient of their slew of soundtrack work, Knox gently begins to usher in new motifs, with the closing sounding somewhat reminiscent of an understated Clint Mansell. A gorgeous opening hooded in menace it is the perfect foil for second track ‘Out Past the Dark’. An apt title, this brooding piece is the album’s dark hinterland, a wander through pastures oblique and unknowable due to the noir pitch. Names such as Tim Hecker and Ben Frost immediately come to mind as the track begins to sprawl and squall. It is very much the most ‘active’ track on the album, with a number of noticeable changes of pace, dynamic and thoughtful flourishes of strange and disquieting timbre. Lush yet chiselled, the centrepiece of Black Rain (I) is a highlight in the A-Sun Amissa catalogue to date.

The album closes with ‘Plucking Feathers from a Swan Song’, running slightly shorter than the previous two. It is by far the most atmospheric, relying on long, drawn out drones to provide the canvas and textures for Knox to lovingly pain his shimmering distortion and gorgeous piano work. Although the track is very much in the same vein tonally as those that have gone before, there is something ineffable about the track that feels like it belongs in another place – perhaps Black Rain (II), should it (hopefully) happen. It almost feels like a change of season has taken place, or, looking at the timeline, one imagines this may have been composed during the deepening crisis of the pandemic globally. However moody and saturated in darkness the first two soundscapes were, this is even less wholesome, despite its unabashed beauty.

The second half of the track ushers in a guitar that begins to rumble and becomes more and more defined than any instrument ever before on the record. It feels depressed, melancholic and instilled with a greater anxiety than its preceding cousins. The beauty of Richard’s work and the whole of A-Sun Amissa and this type of music, is that of course one can project onto the canvas created, so if nothing else, it allows one to reflect on where and how one’s own psyche is holding up… Whether I’m OK or not aside (!), the more I return to the album, the more I feel that the latter track is either the beginning of a new record or leading to something else. What is not in doubt, is that it is another delicious slice of atmospheric sonic alchemy.

Black Rain (I) is another sublime addition to A-Sun Amissa’s discography. The three tracks of which it is comprised each offer their own distinct personality and corresponding emotive touchstones. I greatly enjoyed how unencumbered from the rigours of composition and the recording process this trio felt and it feels like it must have been a joyous experiment for the main man himself. Here’s hoping Richard already has a second instalment in the works.