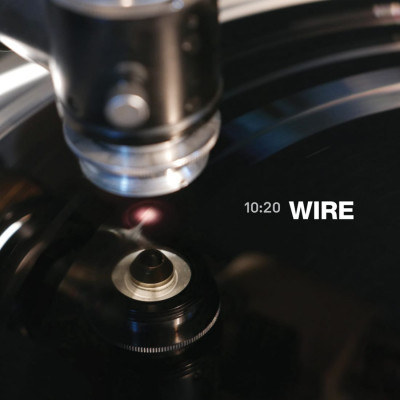 “I saw a drunk old lady pissing in a bin, it was far too high, she couldn’t stop.” These lines from ‘German Shepherds’ are among my very favourite Wire lyrics. A vivid urban snapshot, it packs a lot in to a short window. Elegant and concise, the calm vocal makes an unruffled observation of an abject world but, rather than disgust, offers a qualified sympathy for the subject’s predicament. This fleeting tableau is self contained, as if it just fell into the song on the way to the studio. Glanced from a taxi or rushing through a train station. I have loved this song for years and still have no idea what it’s really about. Wire’s lyrics tend to be like this, smooth and gnomic, gliding past. Typically open to all sources and inputs but never cluttered.

Originally a track on the Silk Skin Paws EP, the lyrics of ‘German Shepherds’ also bequeathed the title of It’s Beginning To And Back Again, or IBTABA. Officially their sixth album, much of it was based on live recordings of material from the previous two records subjected to considerable studio tinkering that left them sounding anything but. It marks the beginning of the habit of reworking songs of which this new release 10:20 is the latest example. Versions of  ‘Boiling Boy’, ‘German Shepherds’ and ‘Over Theirs’ appear on both records. Essentially the 80’s obsession with crisp sequenced patterns has been swapped out for layers of smoothly distorted guitars. Ever contrary, these newer versions actually sound like a live band in a room while the live sourced IBTABA ones gleam like meticulous studio constructions. This effect is unusually cemented by the wooden smack of Robert Grey’s sticks counting in ‘German Shepherds’. The actual arrangements are very similar, instantly recognisable but rendered in very different sonics.

10:20 was originally intended as a Record Store Day release and got pushed back for obvious reasons. The title alludes to the dates of its two halves, recorded around the Red Barked Tree and Mind Hive albums respectively. It also bookends a decade of new boy Matt Simms being in the band. The first half was available previously as a limited edition bonus EP Strays that came with early copies of Red Barked Tree. These are so far the only released recordings to feature Margaret Fiedler who was briefly a touring member of the band before Simms joined full time. As Simms plays on them as well and all the material dates from when Bruce Gilbert was in the band it is perhaps the one example of all six members having their fingers on something. Which is band trivia as much as anything. While not quite Kraftwerk in their erasure of the personal there is a strong gestalt element to Wire. They are never obviously self absorbed or emotionally incontinent. Secular and formalist in approach, their Englishness is not parochial, feeling instead like a particular strand of a Pan-European identity.

The last of the 2010 tracks ‘Underwater Experiences’ has the most history having been written for their second album Chairs Missing it pops up twice on contentious end of the first phase live album Document and Eyewitness and featured in a more recent version as ‘Attractive Space’ on Change Becomes Us, a full length exploration of reworking old songs. It’s hectic and intense, it feels very much like recent Wire playing early Wire and I would not expect this version to preclude further reinterpretation, although why this particular song has been revisited so often remains a bit of a mystery.

On the 2020 side ‘Small Black Reptile’ is one of the tunes from 1990’s confounding Manscape to be given new life on this year’s tour. Sparse and electronic in it’s original reading it’s here reshaped as a modern pop song. It’s an enjoyable improvement but with its bed of soft synth chords, clean drums augmented with handclap effects, processed guitar and cool melodic vocals it recalls nothing quite so much as punchline futurists A Flock Of Seagulls. I’m not judging that, but it’s right there. Using a similar recipe but somehow not doing that ‘Wolf Collides’ was mystifyingly left off Silver/Lead. Floating and effortlessly melodic in the general way of their recent work it might be the album’s high point and offers a kind of oblique summation of their approach in the lyric “our means are old, our tune is new.”

Lastly they revisit ‘Over Theirs’ the widescreen finale of The Ideal Copy. This new version is commanding, tougher than the 80’s one, the blunt riff more monolithic. Driven on by the steady crack of Grey’s drumming its neat trick is being somehow both static and propulsive at the same time. It drops without fanfare and the second half is just warm overlapping drones. It’s marvelous! Intended then as a bit of an odds ‘n’ sods release for fans and completists, 10:20 nonetheless offers a strange and persuasive career overview, entry via the side door into the stunning catalogue of one of our most unique and brilliant bands.