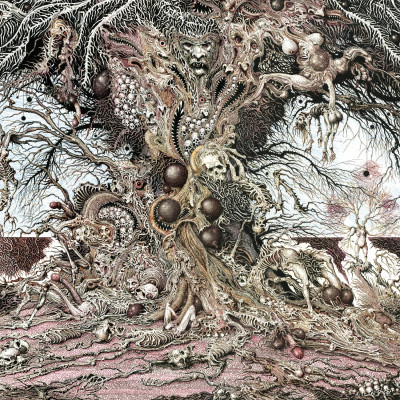 Ulthar announced themselves onto the wider death metal scene in 2018 with the release of their debut album Cosmovore. That was an album without limits, scratching around in the filth for ways to be heavier, weirder, more challenging and largely succeeded in its profane endeavours. Sure, at times the band pushed the compositions themselves too far, and yes, the production was off at times, meaning passages that needed crystal clarity were instead a little muddy. But, overall, Cosmovore suggested that something rather deliciously wrong and bad for your health was bubbling away in, of all places, sunny California (Oakland to be precise). Nothing, however, suggested what has arrived in the form of Providence.

The jump in writing, tone, vision, and – dare I say it – authority is astounding. With Providence Ulthar have surely pushed their way into the inner circle of contemporary death metal bands on a global scale. The trio have tightened and sharpened absolutely everything about Ulthar as concept, so that they are figuratively a spinning vortex of razor blades almost impossible to see, slashing and screaming down your ear canals. Before going into detail, it has to be said that the fact this album has been composed and executed by just a trio is pretty incredible. This record features riff after riff after riff and insane bass and drum fills from every single dimensional portal you can think of. How have only three members creating this many headed hydra…?

If there’s an issue with Providence, it’s very much at its beginning, with short intro ‘Churn’ and first track proper ‘Undying Spear’ being the album’s weakest points. There’s just something a little too straight forward in the opener and the latter features the least memorable guitar work of the record’s thirty-six minutes run time. It also begins with a rather odd acoustic piece which, personally, I don’t think works all that well, although the band should be commended in investigating a greater breadth of sonic texture. It’s just a little too much of a toe dipped into water here though, but it could be interesting to hear how such elements could be incorporated on future projects. Both tracks, I should clarify, are very adept, but in the context of the rest of the album they are not standout moments. And for those listening to lots of death metal, I fear the opening minutes of Providence may allow impatience or, worse, ambivalence to get the better of most – especially in this digital-led world we live in – and for some to bail prematurely. It would be a gross misstep and real sadness if that came to pass for any death metal, or indeed extreme metal fan, because immediately after that the album thunders into its primal, toxic, maimed full-on glory.

The remaining half an hour of Providence is brutal punishment and therefore absolutely delightful to those who wish their ears defiled. The track bearing the album’s name boxes the listener around the ears with some tearing, clawing guitar work and feral drumming. The vocals throughout the album are a cut to the vein above too, duelling between mid-pitched shrieks and the more traditional guttural grunts. I think it the album had been delivered purely in the latter, some of the momentum the instrumentation affords would have been rendered impotent and a whole swathe of sonic palette would have been lost. ‘Through Downward Dynasties’ is a good example of how this vocal interplay exacerbates the dizzying effect the trio create with their carnal instruments, as well as highlighting quite how fantastic the production is on this album. The mix is almost without fault, allowing everything enough room to breathe in sections that can seem almost impossibly complex and dense. A rare achievement. Praise be and soul be damned forever.

‘Cudgel’ is very much an album highlight (as much as an inhuman, cacophonous death metal album can have “highlights”). It’s like being hit around the head by some malevolent force actually holding the swells of thunder from the sky to your ears. Powerful, brutal – all the cliché adjectives I can summon – don’t do testament to this five-minute firestorm of rabidity. It’s the lynchpin of the album, the black hole around which the rest of Providence rotates, reviles and spasms against. The flow and pacing of the album are remarkable and another true asset to Ulthar’s approach to a true album listening experience. Following track ‘Furnace Hibernation’ is not the first time some blackened elements surface on the record, but it’s surely at its most overt here. A complimentary balance is expertly found, sounding fresh in 2020, when this blurring of the two towers of extreme metal is all the rage. Exemplary, once again.

The album finishes with the one-two punch of ‘Narcissus Drowning’ and closer ‘Humanoid Knot’. Both are immense sonic assaults more reminiscent of ‘old school’ death metal than some of the more forward-thinking tracks before, the latter being particular colossal and forbidding. Ulthar clearly nod to their forebears across Providence, with hints of Morbid Angel, Immortal and Mayhem being equal to those of Bolt Thrower, Demilich and Incantation. But they are another of a new crop of bands, such as Tomb Mold and Horrendous, that have managed to bloodily mesh those sounds into their DNA, while retaining their own distinct personality and modernity. Providence is an album that can easily be placed in a new pantheon of albums showing what death metal can and should be in the future. Mercurial and awe-inspiring.