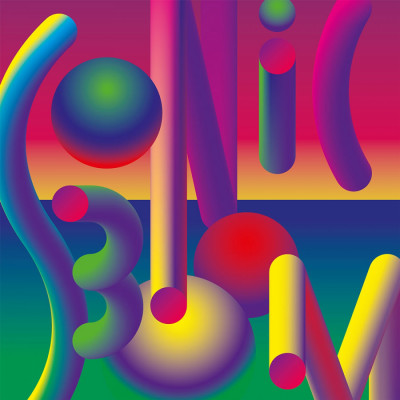 All Things Being Equal by Sonic Boom

Sonic Boom‘s first full length in a good long while finds him in a mostly relaxed and reflective mood. A leisurely paced set of fuzzy modular synth jams, All Things Being Equal sees Pete Kember in greater command of his personal analogue orchestra than ever before. The jagged edge minimalism has aged and mellowed into something richer and smoother. It would appear the more abrasive side of his personality has softened somewhat as well. For the most part it’s a warm and open hearted album, its sound a radiant pulse.

Some weight is being thrown behind the fact this is the first Sonic Boom album for 30 years, as if he’d been missing in action that whole time. That first one, Spectrum, gave its name to his band that made a run of albums through the 90’s and a couple of years back he used the Sonic Boom name for a collaborative EP with No Joy. Still, it’s true that recent years have seen him moving out of the limelight into a variety of production roles with the likes of MGMT, Panda Bear, Beach House and Moon Duo. It’s not hard to hear what those artists were hoping to gain in this new album, nor that it has been a two way street.

The sleeve features a straightforward and humble thank you to all of his musical co-conspirators past and the entreaty ‘vote everyday through your way of life’. It’s a nice sentiment and feeds into the general vibe that Sonic has retired to his garden in Portugal to potter about in something approaching hippy contentment. A kind of nature consciousness winds around a calmer outlook and is strong in the album’s first three tracks. The sound is warm and buoyant, ‘Just Imagine’ offers “just imagine you’re a tree, just imagine simplicity” On the bucolic drift of  ‘Just A Little Piece Of Me’ he hymns the terminal union of man and nature “bury me beneath a tree, let its roots grow into me”, while ‘Things Like This (A Little Bit Deeper)’ picks up a bright groove as Sonic searches for something more “take me somewhere a little bit sweeter, gonna rest my soul and find some peace there.”

The mood is both of a piece and yet considerably more connected and wholesome than the psychedelic adventuring of his younger days. Right on time, things take a far darker turn, picking over the past and unhelpful versions of the self. ‘Spinning Coins and Wishing On Clover’ finds him wondering what he might do “if I had my whole life to live again over” solemnly intoning over backwards running echoes and ghostly murmurs. It’s far colder and darker, almost unnerving after the warmth of the first few tracks. On ‘My Echo, My Shadow and Me’ the spooky vibe almost tips over into ‘This is Hallowe’en’ territory as a spectral vocal moans “I am the darkness that you’ll never see, I am within you as it is within me.”

So far, so inward looking. The album’s second half turns outward and gets sunnier again. The bright streams of sunlit organ and a smiling vocal of ‘On a Summer’s Day’ leading to ‘The Way That You Live’ is even more upbeat call to reflection and positivity. The music glows with the bold colours and smooth contours of the album’s slightly upsetting artwork. Early on Kember shared these tracks with Stereolab’s Tim Gane who thought them strong enough to release instrumentally. This little nugget played on my mind at first because it seems obviously true that the instrumentals would be great but also because it made me question Kember’s decision to add vocals. Most obviously ‘Tawkin Tekno’ is a clumsy misstep, a fine track marred by a processed robot vocal repeating the awkward title. Never blessed with a strong voice the idea he drew inspiration from Sam Cooke and The Everly Brothers seems hopeful to the point of delusion.

Meanwhile the lyrics rarely stretch far beyond nursery rhyme platitudes soporifically repeating. Then again, that may well be the idea. Certainly the more you listen to it the more they sink back into sound, a lulling stream of humanity among the electrics, less a focus than an element of the whole. ‘I Can See Light Bend’ is the one time he steps away for something more opaque and mysterious, the track is one of the album’s best as well. The final tune starts with an electrical crackle. ‘I Feel a Change Coming On’ takes a look around at the disheartening state of things and hopes against hope for a positive outcome from the turmoil “I see dark clouds again, I hope they’re only bringing rain.” This is where Sonic is now, more at peace with himself and wishing well for a new day after the storm. It ends on an electronic thunderclap. Welcome back Sonic.