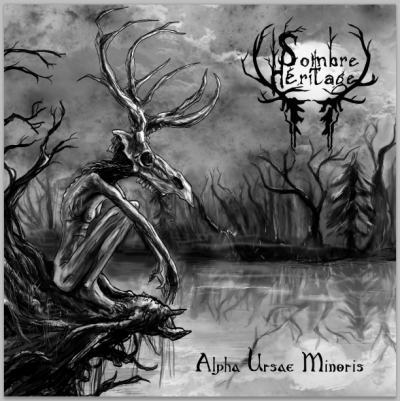 After a confident riff starts out the record with intent in ‘Polaris’ there’s a great sombre melancholic section, that’s then overrun by a furore of drums for the beginning of next track that shares its name with the band. The initial burst breaks into a descending riff; then halfway in there’s a more consciously epic section with ye olde chants of olde vocals. It still somehow feels like there’s not much variety to the track, perhaps the pacing is too constant, but it rattles along energetically enough. The relentless churning riff of ‘Nature Souillée’ is great, probably the highlight of the album for me, the other side of a fine distinction between unremarkable repetition and pounding, gradual conjuring build through intense revolutions. Again the more measured atmospheric parts are the strongest to my ears in ‘Déchéance’, with the earlier faster bits feeling a bit rushed rather than gripping; the hissing chaos of the uptempo riffs in ‘Dissidence’ make the whole track more compelling. Finally, ‘Ténèbres’ closes out the release with another really strong track, joining the wildest screeches and sombre ancient calls to expansive rolling riffing that keeps a smoking atmosphere going for all of its seven minutes.

It’s a bit bright sounding for my grubby lo-fi tastes, the drums in particular a bit airless and lacking feel somehow, while the production is a bit of a harsh slash, more tinny than gritty. Similarly with the mix, I always prefer the voices in this kind of music to be more occult murmur than frontman focused, so I’d prefer the vocals a bit lower down. But I always say that and I’m probably in the minority, other people are apparently interested in such grotesqueness as wanting to hear the words… That said, the delivery of the vocals is pretty vociferous, spat out, percussive even, which fits with the expressive and aggressive delivery of riff after riff, the strongest element of the record and obviously the most important bit.

Actually the cover is a good marker for what this record’s about, it has all the monochrome ingredients required for a great black metal record, but could be all the more compelling if it was a bit more shadow than highlight, hinting at creatures lurking in the forest rather than showing them up front and naked. Still a worthwhile start from this new project from a longtime musician.