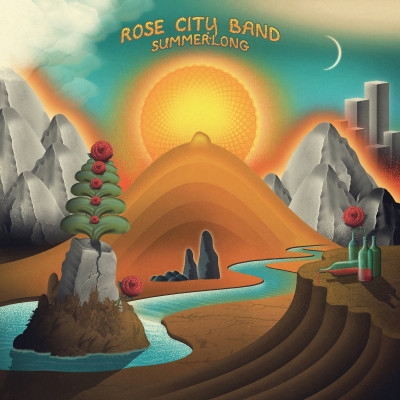 Ripley Johnson is the kind of man who simply oozes psychedelia from every pore, with him finding hallucinogenic release in not just one, but two bands who remain pioneers at the forefront of the new psych scene. Both Wooden Shjips, and Moon Duo are key bands of a scene which continuously mutates into different forms, offering a bearing point from which all others travel from. Indeed, the success of Moon Duo may even have overshadowed Wooden Shjips now, although the good Shjip will always remain the mothership from which California cool seeps from.

Not content with this, Rose City Band now offers a different vantage point from which to explore Ripley’s musical mind as he foregoes the drone and repetition for a sun-soaked country rock sound, albeit one steeped in the familiar lysergic familiarities which his vocals stir within your mind. A one man project, and originally intended to drop with no fanfare or explanation of the musical talent behind, what sounds like a complete band is in fact Ripley building an orchestra of sound from his own bottomless pit of psych.

Summerlong is the kind of album you want to play as you drive down long highways, with the top rolled down. Where-as in the past the music has been the focus of Ripley’s bands, here it is his vocals and lyrics which take the front seat, with the music bearing slight accompaniment. It’s in a similar vein to Chris Robinson’s Brotherhood although here the blues is replaced with country rock. In fact, if ever a term was required it would be Cosmic Americana.

It’s almost as if Ripley has discovered his own Sweetheart of the Rodeo as he brings in lap steel guitar on ‘Real Long Gone‘, takes on countrified balladry with ‘Floating Out‘, and even plays around with the rambunctious on ‘Reno Shuffle‘. Best is when this countrified sound hits the classic Ripley sound and heads for the stratosphere as on the closing couplet of ‘Wee Hours>’ and ‘Wildflowers‘ which transforms Ripley into a one man jam band capable of going on forever and ever into the heart of American psychedelia.

Whilst this may sound like a vanity project it is actually on a par with both Wooden Shjips and Moon Duo and brings a whole new flavour to what is turning into a rather remarkable strand of bands. Much like The Dead had their offshoots, here Ripley channels in the looseness of Garcia’s playing style into another outlet for his music, and lets hope that it isn’t the last as through Rose City Band he has created something quite marvellous. The summer of 2020 may be a write off as far as a lot of things go, finding an escape through music has become all the more enjoyable through Summerlong.