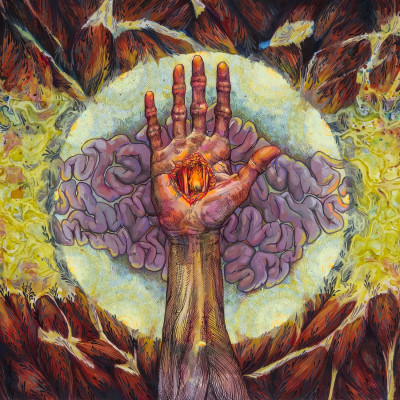 As has been stated numerous times by me and others on Echoes and Dust, as well as other recesses of the Internet, extreme metal is in a period of schism and flux, with inventive bands coming and going, establishing brain-melting new sounds, dizzying records and a delicious penchant for wild abandon and experimentation. If artists such as Krallice are leading the way for black metal, Pyrrhon are fearlessly at the frontier of modern death metal, pushing ever forwards, never settling, never compromising.

Abscess Time, Pyrrhon’s fourth album proper, is another landmark in their discography. That endless struggle, alluded to before, needs to be reflected upon. For all the endless invention and willingness to challenge, it would be fair to assume that Pyrrhon would have made missteps in their discography, and so it is no small tribute to the quartet that every single release – album or not – has built upon the foundations of the past. You know where this is going: Abscess Time is their best and most accomplished release to date.

Pyrrhon have always been a band blending dissonant, deeply imaginative technicality with a face-ripping immediacy. Like all the best complex music, Abscess Time is a record that the listener needs some serious focused time to unpack, let alone digest properly. Even the shortest tracks on their new album contain multitudes. I’m immediately struck by the idea of having been commissioned to do some pretty serious mathematical equations for a deeply serious physics experiment, while being challenged to do so while on a very bad acid trip. The blur of the deeply technical, impeccably executed, with the deeply meaningful – if negative – reflections on the state of ours mind and our world, all with a knowing wink of abandon, is about as well as I can sum up the perplexing state of unease engendered by Abscess Time. It’s aural motion-sickness; chaotic, a compositionally baffling approach to songwriting – ringing in syncopated atonality alongside drumming that blisters the skin and featuring Doug Moore’s unhinged vocal acrobatics – and is maddening, astonishing and awe-inspiring as minute on minute goes by.

Colin Marston (not-so-coincidentally of Krallice and a host of incredible projects) is the mastermind behind the recording, mixing and mastering of this record and Pyrrhon have a lot to thank him for. Although Marston has been behind the desk of a great amount of the band’s output to date, Abscess Time is him at full creative power, too. The record is quite unbelievably well balanced and clear throughout. If a pin had dropped during the recording at some point, I truly believe the listener would have been able to hear it, despite the maelstrom grinding on around it’s singular minor note. With such a high level of technicality and downright strangeness going on throughout the entire album’s near hour long length, it feels absolutely crucial that Marston kept a tight rein on all the moving parts. If, at times, some Pyrrhon cuts have sounded so frenzied they felt like they were coming apart at the seams, the band’s writing and performance and Marston’s accomplished work in the studio, mean that the entirety to this album feels not only accomplished but writhes, however unhappily, within a fine mesh of grandiose structure. In this way and others, Abscess Time feels very oddly listenable.

The album snarls out of the blocks with title track ‘Abscess Time’, a disgusting five-minute song, featuring guitar lines that sound utterly deranged, with menacing, seething bass, and curious, rigid drumming underpinning a track on which Moore froths with fever, featuring lyrics that uncover how base humanity is and how the band revel and revile it in equal measure. ‘Down at Liberty’s Ashes’ has a similar running length, but couldn’t be more different, featuring a sample from Taxi Driver before unleashing a caustic lava belch of death metal fury. ‘Teuchnikskreis’ is a violent assault of the ear, twisting and biting, blasting away in a form of brutality all of its own making. The track is altogether horrid in the very best way, featuring the deepest vocals I’ve heard Moore accomplish on a Pyrrhon album to date, gurgling as if preaching a hate filled missive while choking in his own blood. Abscess Time continues to confound on ‘The Lean Years’, the first of three epic tracks clocking in around the eight-minute mark. The quartet lurch through different time signatures with wild abandon, and the dynamics of the track prove to be equally bipolar, moving from breakneck speed to the doomiest dirge on the LP. While unabashedly intense in its own right, ‘The Lean Years’ does act as a palette cleanser from the unbridled chaos and perversions of the opening salvo.

The Mother of All Virtues and What Passes as Survival are absolutely brilliant albums, but if these is issue with both, it would be that for many listeners their pacing could be called into question. I personally like the headache-inducing challenge of keeping toe-to-toe with an album, not only to decipher the compositional quality, the lyrics and so on, but to acclimate to the listening experience of something quite so complex and challenging. However, I believe most – even those well established in extreme metal – may find the demands of those albums too great. “An EP of this? Fine. But maybe woah to a full-length…” What marks Abscess Time out as different is that I genuinely believe a far larger crowd will stick with this. The pacing of the record is superb, so while Moore, DiLella, Malave and Schwegler’s compositions are no less ferocious and taxing that before, they have found an overall structure and track-listing that allows for a more linear listen.

The diversity of the listening journey continues with ‘Another Day in Paradise’, with it serving up some of the most pummelling ‘classic’ death metal Pyrrhon have ever delivered on record. ‘The Cost of Living’ then serves as the spine of the record, a lumbering monolith that steamrollers everything before it into a bloody pulp. It’s a towering testament to the ambition of the band and how fantastically they can deliver on said ambition. A wall of sound to put you in the grave.

‘Overwinding’ opens up the record half of Abscess Time, with an improvisational track that showcases the close guitar and bass relationship of the Brooklyn band to greatest effect. A carousel of eclectic, strange flourishes fries the ears before we lurch into the one-two punch of ‘Human Capital’ and ‘Cornered Animal’, two tracks just shy of the three-minute mark that reset the momentum of the album to ‘full-on frenzied’ once again. The tracks spit and seethe in equal measure before DiLella and Malave once again jam on the woozy, uneasy ‘Solastalgia’.

‘State of Nature’ is absolutely gross. A sickening, lilting riff and languid drums and breathless bass figuratively glare at one another as Moore’s vocals slither over this disquieting sonic tapestry. It’s a wildly inventive track that sounds like a mind finally giving in, becoming wilfully untethered to reality or of having a care for personal responsibility or safety… It’s a deeply uncomfortable track and may very well be my favourite thing Pyrrhon have done. Abscess Time closes with the epic ‘Rat King Lifecycle’ which is an eight-minute culmination of everything that had gone before, summoning the strength to pick up the tempo again and featuring even more atypical guitar wizardry. DiLella really has outdone himself on this record.  It pushes the listener and the album itself to the very edge of sanity, finally feeling like the album could be rendered asunder, splitting and spasming to a demise, pus leaking from speakers and shards of teeth splintering your expensive turntable case.

Pyrrhon are a hugely important band and deserve to be heard far more widely. If you have only just become aware of the new wave of inventive death metal and you’re jamming Imperial Triumphant and Schammasch but want to push your mind to deterioration-causing levels, try Pyrrhon. Abscess Time would be a great place to start. Then work backwards through their peerless discography. The band have produced adventurous and – I’ll write it again – frontier-breaching death metal yet again, proving they have not only mastered their craft, but started adding chapters of their own for future pretenders to study. Blurring where impeccably composed music stops and improvisation begins, and where the line between death metal and other extreme genres (and jazz leanings!) lie, Pyrrhon have provided 2020 with an incredibly strong statement not of intent, but of fact. They are one of the most exciting and most relevant bands in extreme metal right now. You need to listen to this album.