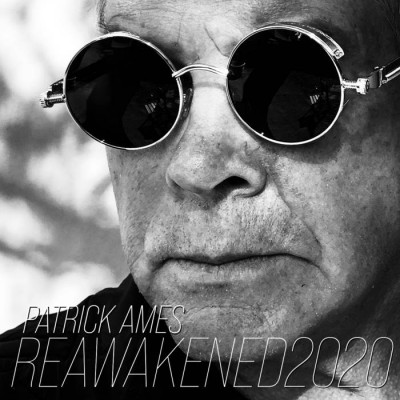 It is time for protest singers to be in focus again. While some artists joined in when the current social, political, and yes, medical events reached a boiling point. Others, were they’re practically throughout their musical career. Mercurial figures like Bob Dylan or Gill Scott-Heron instantly got the attention they deserved, others, like San Francisco singer/songwriters Patrick Ames had to linger in the shadows, often undeservedly.

And now it might be a perfect moment for Ames to get the credit he deserves. Back in 2017 on Donald Trump’s inauguration day, Ames wrote ‘Reawakened’. “I couldn’t watch the proceedings so I went into the music studio and locked myself in,” says Ames.

“Don’t be shy about your equality. Don’t be quiet when they fence in the free. Don’t be violent when they interrupt the peace. Because the good in us all is about to be released. Reawakened… The force of good it has been reawakened.” Wrote and sang Ames then, and the song is even more in context now than it was in 2017. Certainly the reason Ames decided to re-issue the song now, re-mixed and produced by John Ireson.

But ‘Reawakened’ was not a one-off Ames being aware of what’s going on and singing it out loud. A few months before ‘Reawakened 2020’ was released Ames issued Liveness EP. The five-song EP starts off with another semi-prophetic ‘Bang Bang Bang’ – Did they shoot you or me? asks Ames recalling the likes of Gil Scott-Heron who he quotes in the song.

Musically, with his rocking gospel tendencies Ames recalls Nick Cave, Dylan, Tom Waits, and other giants that really had something to say. With his music and lyrics, this might be a perfect time for Patrick Ames.