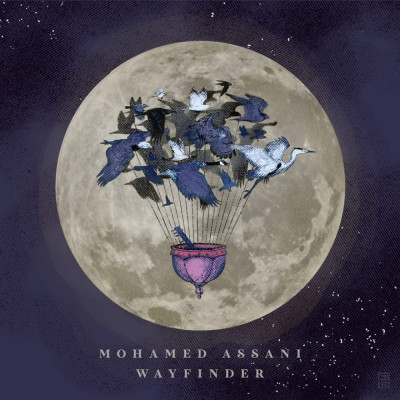 Incorporating the sounds of the sitar into modern music, of course, is not a new thing. It ranged from its use as a mood instrument (The Beatles, The Stones…) to the lead instrument combined with modern sounds and rhythms. The first option seems to have come up with some excellent results, the latter, not so often. Of course, if you don’t count in exceptions like Anoushka Shankar, Nitin Sawhney, Trilok Gurtu, or Zakir Hussain. In those cases, it was mostly a combination of modern with Indian Classic music.

But what about the possibility where sitar is the central musical figure and modern music, in this case, electronic beats? A combination where neither of the two poles dominates or strangles each other?

Enter Canadian musician Mohamed Assani with his album Wayfinder. Assani obviously decided not to go the ‘novelty’ route but tried to make a real fusion of modern musical styles, particularly ambient electronics with not only Indian/Pakistani classical music but also some other World music traditions like North African and Middle Eastern.

Assani decided to really ‘get into the mood’ by recording the material for this album mostly between midnight and 5 am, somewhere in Canada’s Kootenay Mountains. And it shows in the results.

Wayfinder is certainly very late night music with tracks like ‘Awakening’, ‘Lullaby for Guli’ or ‘Darbari Dub’ striking the right balance between modern ambient sounds and Assani’s exemplary sitar playing. Modern and World Classical have skilfully meshed together, neither suffocating nor dominating each other, but still placing Assani’s instrument at the forefront.

What we get with Wayfinder is not gimmicky fad music where either opposing music style is just appendix to the other, but a true (ambient)blend perfectly suited for those late hours when it was actually recorded.