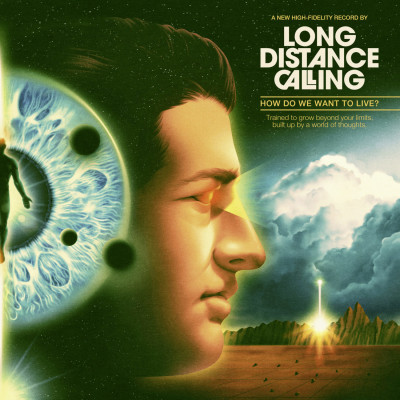 How Do We Want to Live? by Long Distance Calling

The world’s increasing reliance on technology – in particular the rise of A.I. systems such as Alexa and Siri – have long been the subject of furious debate, among both hack sci-fi novelists and academia alike. Are they enriching our lives, helping us to make the best use of our time to find what makes us happy, or is our over-reliance on such appliances leading to increased feelings of isolation and helplessness? Long Distance Calling’s seventh album, How Do We Want to Live? tackles these themes head on. The album cover – reminiscent as it is of some paperback science fiction novel a charity shop couldn’t give away – shows exactly what the Germans have crafted here; the themes are tired and predictable and the trite conclusions have been reached a thousand times before (even if they become increasingly more accurate). Still, this is an album not a novel and so it’s on the music that album must be judged. Indeed, the hackneyed futuristic themes, mostly expressed through spoken word samples, end up adding a layer of otherworldliness to proceedings – for example the soaring guitar work of ‘Curiosity (Part 2)’ wouldn’t sound quite right without the concept being called a bastard at least five times.

Long Distance Calling have been relatively unsung in the post-rock world for many years now. While they are perhaps the biggest band in the genre to come from Germany, the four piece have never quite hit the heights of renown that some of their international contemporaries have. Perhaps this is in part due to their heavier sound – the heavy riffs and pounding drums edge them towards the metal community, despite their distinctly experimental edge. Nevertheless, they have carved a formula for themselves, a largely dark and menacing, occasionally punishingly heavy sound with touches of humanity in the form of soaringly beautiful guitar solos. How Do We Want to Live? hones that formula but adds an electronic bend that helps distinguish the album from the rest of the band’s catalogue. Indeed, the band show an intrinsic confidence in their sound, and do a masterful job of bringing a touch of humanity to their largely machine-driven narrative.

The first full song, ‘Curiosity (Part 2)’ sets the template for the album. A menacing, portentous opening, which eventually gives way into a soaring guitar driven release, eventually shifting to an aggressive heavier section towards the end of the track. The band rarely deviates from this model, but each song still manages to bring something new to the table. ‘Voices’ is an early highlight; a trippy, repetitive track that layers cherubic vocal samples into a beautiful, serene soundscape. ‘Hazard’ is the most straight forward post-rock song, with echoes of God is an Astronaut reverberating throughout. ‘Fail/Opportunity’ is another highlight, a slower, mournful wail that packs a lot of emotion into its shorter run time. ‘Sharing Thoughts’ is perhaps the biggest disappointment. Its discordant, staccato intro promises big things, but it rather runs out of steam during its triumphant mid-section, without particularly adding anything to the album.

Perhaps the most distinctive track is ‘Beyond Your Limits’. Long Distance Calling have long set aside one track per album for a guest vocalist, and for How Do We Want to Live?, this is that track. The guest vocalist this time is a relative unknown, Eric A. Pulverich, from German indie band Kyles Tolone. Obscure he may be, at least outside of Germany, but he delivers an exquisite performance, his soulful yet still somewhat sleazy voice meshing beautifully with the rest of the band. The only issue is how much that song stands in stark contrast to the rest of the album. Narratively it makes sense, but it feels so different from what has come before and leaves the last two tracks sound a little empty by comparison.

How Do We Want to Live? is a beautiful showcase for a band who have been plugging away for a fair few years now, and perhaps the best album Long Distance Calling have released to date. The narrative may feel a little clichéd, but it helps set the backdrop to a menacing, emotional album dripping in a futuristic veneer, but never losing sight of its humanity. The A.I. apocalypse may not be quite there yet, but with an album like this, Long Distance Calling certainly should be.