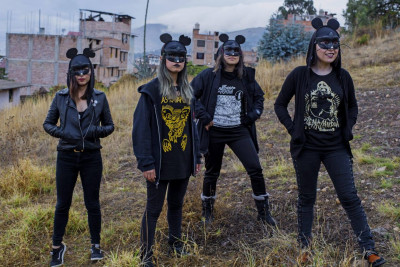 Punk is a world culture, although there are similarities between the subjects it tackles, we find differences in regards to specific characteristics about how these develop according to geographic location. For example, we can all talk about corruption but the political reality of a place that’s different to others in some regards, and every place place has its own sound, which is also fed by its history.

Already involved in various ways in the Peruvian punk scene Irma (drums), Kiara (guitar), YK (vocals) and Wendi (bass) got together as Las Ratapunks in 2014. They released the 6 track Ratas de Ciudad in 2017 and earlier this year put out the excellent Fracaso, año de la Rata 2020, 6 tracks of exciting, energised, rip roaring, modern punk! Dealing with social issues including corruption, femicide and sexual harassment the 6 tracks are an important reminder of the potency of punk to challenge political and cultural injustice and militate for change. Although only released in March, Fracaso, año de la Rata 2020 has already caught the attention of those with their ears to the ground with tracks being played by Just Some Punk Songs and The Noise Merchant in the UK.

The band had a short tour of Europe, playing France, Germany and Spain, planned for this summer but like many things it has had to be rescheduled to 2021 due to the global Covid-19 pandemic. However, putting their money where their lyrics are, the band will give all money made through album sales on Bandcamp to organisations helping to mitigate the effects of Covid-19 in Peru.

(((o))): Could you tell us about Las Ratapunks? Where in Peru are you based?  When did you get together?

Las Ratapunks(LR): We’re a punk band from Cajamarca, northern Peru, we got together in 2014 with the intention of making noise and express ourselves, tell our experiences and what we think about certain situations.

(((o))): How did you get together, were you friends who became a band or a band that became friends?

LR: Both; Irma, Kiara and YK met through concerts and mosh pits, one day we decided to rent a rehearsal space just to see what came out of it, by the time we were out we had a band. Wendi came in as bass player a week after our first show and that’s the line up that we’ve kept to this day

(((o))): Why did you get together? What were the main reasons that made you decide to form a band?

LR: We got together because we wanted to have a band, sing about some experiences, let our voices be heard in regards to certain issues that we don’t agree with, and to give visibility to other issues that are still taboo.

(((o))): Did you have a clear idea of how you wanted to sound when you started?

LR: We found our sound as we learned how to play, at some point we hoped we’d sound like the Distillers, then like 90’s Peruvian skatepunk, then we ended up sounding the way we do today: like the Ratapunks

LR: Because our sound was really raw, pretty ratty at the beginning and also cause we’re the size of rats.

(((o))): The video to ‘Los Ladrones’ off your 2017 album, Ratas de Ciudad, is really interesting, what issues are you singing about in that song?

LR: ‘Los Ladrones’ is about the political corruption in the country, we decided to use archived images in the video because to us it’s important to put the current state of Peruvian Political corruption and injustice on display; also, near the date premiere of the video a politician who is connected to corruption scandals had a traffic cone thrown at his head, and we saw it as representation of all the impotence that the people feel. That’s why we include the cones in the video, as a representation of the peoples revenge (it’s part of the lyrics).

LR: We touch on subjects that we think are important to visualize such as corruption, exploitation, dehumanization, injustice, impunity, sexual harassment, femicides, child pregnancy and resisting a corrupt system, and also the contradictions we face on a day to day as human beings.

(((o))): You have a really exciting style, do you feel it has changed at all between the first and second album?

LR: There is a better technique, but the same drive to say what we think and what we believe. The first EP was recorded live in a Cajamarca Skatepark thanks to Sawá Sesiones, from which we got a reduced number of recordings on Princo CD’s, which we hand decorated. For the second EP we worked with friends who did the recording (Granizo Estudio), mixing(Nicolas Vair), mastering(Robin Rieuvernet) and artwork (Bto Prieto). We’re planning on a limited a 7″ vinyl release, and some cassettes through Entes Anomicos, a German-Peruvian indie record label, though we’ve had to put everything on hold due to the pandemic.

LR: Peru has bands from the 90s/00s and even current date that are still playing and releasing DIY material; they organize gatherings and punk festivals annually and there is a chain of distribution and material though independent stores.
We usually play, up until now we’ve had the chance to play in Trujillo, Lima and Arequipa, and we’ve organized some shows in Cajamarca where we live. But we’ve mainly had a steady amount of shows.

(((o))): Do you think local cultural influences and histories mean there is a difference between European/N. American punk and South American/Peruvian punk in terms of musical styles or do you think punk is a global culture?

LR: Punk is a world culture, although there are similarities between the subjects it tackles, we find differences in regards to specific characteristics about how these develop according to geographic location. For example, we can all talk about corruption but the political reality of a place that’s different to others in some regards, and every place place has its own sound, which is also fed by its history.

(((o))): Were there any bands that inspired you musically, that you were influenced by?

(((o))): How can people hear your music and buy any merchandise?

LR: We were planning on going to Europe in august this year but now we’re just hoping to survive, we are going to reschedule the dates for when the current crisis is over seeing as how critical the situation has been here in Perú. The rain forest has been hit pretty hard due to the global pandemic, and it’s not just the cities, the indigenous population is also suffering. We are going to donate the money we gain from album sales through Bandcamp during the entire month of June to some organizations that are collecting funds to help (the people of) the Peruvian rain forest. 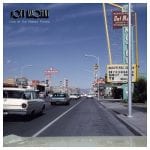 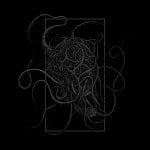