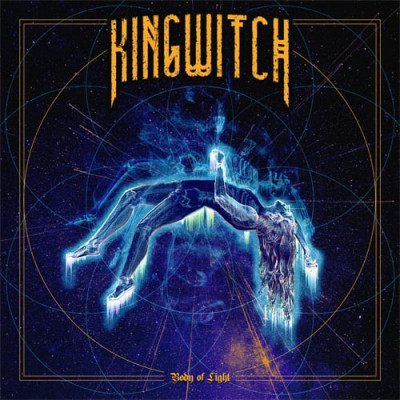 Body of Light by King Witch

As it happened I started listening to Body of Light the same week as the 10th anniversary of Ronnie James Dio’s death and it turns out it would be hard to think of a more fitting soundtrack to the memory of metal’s greatest voice. When we think of RJD he’s like a summation of the essence of metal, those incredible albums we hold so dear are akin to our set text, and the swagger, the devil horns, the dark and fantastical imagery he dealt in have all become the universal brand identifiers. Edinburgh’s King Witch’s second album finds them rebuilding that classic metal sound, sweeping away forty years of sub genres, fashions and dilutions as they march to the top of the hill and proudly plant a flag which simply reads “HEAVY METAL”. Re-establishing core values, shining and sharpening up those tropes till they gleam and are razor sharp: this is an album for the purists and the fanboys (and girls).

The opening one-two salvo of the title track and ‘Of Rock and Stone’ is as fiery, flashy and fulsome a demonstration of metallic power as you’ll hear. Both songs bring the riffs in spades and in vocalist Laura Donnelly they have a Dio-esque powerhouse of a singer. The closest comparison I can make to Donnelly is Witch Mountain’s former lung-busting blues queen, Uta Plotkin, or indeed her replacement, Kayla Dixon. If you’re a fan of that band then King Witch really are for you, and if like me you find their albums, shall we say, frustratingly brief, then Body of Light will be a welcome feast of metal.

The lightning fast solos and dazzling fretwork by Jamie Gilchrist plus the epic harmonies above a raging bull rhythm section during the opener summon Ritchie Blackmore and Rainbow in their pomp. It also possesses one of those winning riffs so catchy that you’ll be singing along to it in no time. Next up ‘Of Rock and Stone’ is less frenzied and starts doomy, with bit of wah wah, in a slow prehistoric plod as the band take us back to the dawn of creation. It builds with subtle, classy keys as the main riff just boulders along like mid-period Metallica, eventually charging at you like prime Purple.

‘Return to Dust’ has a twanging, gothic cowboy intro like Fields of The Nephilim meets Lizzy before hitting its natural stride with another elemental riff. In truth we could do with more of these small stylistic deviations to give tracks more individuality as the next few tracks are less memorable. There is though another set of beautiful, melodic riffs on display here and on the following, slightly grungy, psych-doom of ‘Order From Chaos’.

The next few tracks are similar, if not quite as striking. All the slower passages work best and are most welcome as when in full flight King Witch’s frequent bluster and bombast is in danger of straying into power metal territory, not somewhere I’m particularly comfortable.

The second side of the LP, if you like, mixes things up and restores the very high quality of the early tracks. Notable are ‘Witches Mark’- a frenzied three minutes of Overkill-esque gonzoid thrash with a killer chorus, the pretty, acoustic ‘Solstice II’ and a closing track ‘Beyond The Black Gates’, an epic, momentous slab of doom that lives up to its portentous title. ‘Beyond The Black Gates’ finds the whole band working at optimum doom metal excellence, with classy, swinging drums from Lyle Brown, fulsome, upfront bass from Rory Lee whilst Donnelly and Gilchrist pull out all the stops – at points operatic, at others bluesy and hypnotic.

King Witch have one of those ‘doom metal, random name generator’ type monikers which could see them confused with other acts or lumped in with a ton of middling Sabbath copy-ists. Don’t make the mistake of over-looking them or this album as Body of Light is a  proper, high quality heavy metal album, the likes of which we’re told they don’t make any more.