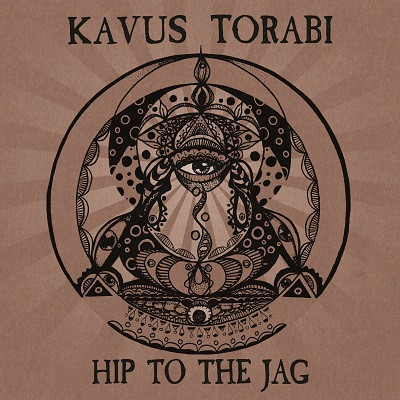 Hip To The Jag by Kavus Torabi

Kavus Torabi has made a name for himself for various bands and projects that he has been with; The Cardiacs, Guapo, The Utopia Strong, Gong, Admirals Hard, a touring and recording musician for Mediæval Bæbes, and one of my favorites, Knifeworld. He’s also a label founder with Believer’s Roast, and co-presenter with snooker legend Steve “Interesting” Davis on Phoenix FM’s The Interesting Alternative Show. But for Kavus, he’s more than just working on various projects and co-presenting Steve Davis.

But he wants to take it a step further. This year, Kavus has unleashed his solo debut release entitled, Hip To The Jag. Released on May 22nd, this showcases a different side to Torabi’s work that goes beyond the Knifeworld sound. It has this drone-like cosmic atmosphere that delves into the unknown with swirling folky, psychedelic, ambient, minimal, and poetic vibes that make his debut album as a solo artist work very well.

‘Chart the Way’ starts things off with some acoustic guitars, pump organs, and thumping electric guitar with a drum beat that makes it a return to the psych period of the late ‘60s with a raga twist as it finds some inner peace from the situations we are facing right now. ‘Silent The Rotor’ is his nod to the Good Morning-era of Daevid Allen and Euterpe.

Here, he makes sure that he’s continuing where ‘Children of the World’ had left off as if Allen is watching him above the clouds to keep not only his word, but the legacy between Gong and his spirit alive while ‘The Peacock Throne’ goes on a sea voyage into the distance that transforms into this atmosphere with a surreal touch of Klaus Schulze’s ‘Satz: Ebene’ from the Irrlicht album.

‘You Broke My Fall’ sees Kavus channeling the first part of David Bowie’s ‘Memory of a Free Festival’ by setting up this party on the loss of a loved one that we all loved and cared for, has now passed into the afterlife. And then it goes upwards into the sky to see what gods and the angels have looked over throughout the center of the Earth. And they’re making sure they are protecting the loved ones away from the chaos that is down below.

Both ‘My Cold Rebirth’ and ‘Where the Eyeless Walk’ is Kavus’s nod to this creepy and cavernous approach to a film-noir masterpiece. Between the bass guitar, reverb vocals, pump organ, and rumbling guitars, I can imagine he took a lot of inspirations of Jack Nietzsche’s score for Donald Cammell and Nicolas Roeg’s 1970 surreal cult-classic masterpiece, Performance.

‘Radio To Their World’ goes into this dystopian nightmare of a nightmare by sending the listener into some Morse Code transmission throughout their views on art and politics on a short-wave radio as it broadcasts to the entire globe and giving us a sign of hope despite the tricky times that we’re living in right now. Hip To The Jag is Torabi’s crown jewel.

He doesn’t pull any punches bringing his own music to life with his debut solo album. The late great Robin Williams once said, “You’re only given a little spark of madness. And if you lose that, you’re nothing.” And for Kavus, he hasn’t lost that spark. He always wants to push forwards and see what the next flight will take him to next. Is he ever going to slow down? Absolutely not. But Hip To The Jag is the album we need to have music inside our systems for a time of healing in 2020.