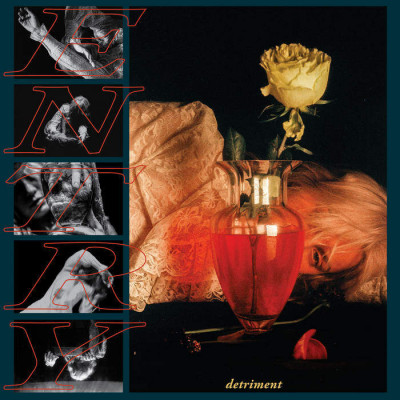 Following the success of their single, ‘No Relief’, and shows supporting the likes of Career Suicide and Sunn O))), Los Angeles hardcore punk quartet Entry have recorded their debut full-length album, Detriment. I say ‘full-length’, it’s really nine songs of bile, anger, and rage at the state of the world that are over and done with well inside of 15 minutes and is all the more effective for that. The band say they developed out of vocalist Sara G’s and guitarist Clayton Stevens’ (who also plays in LA post-hardcore greats Touché Amoré) mutual love for a wide array of bands from across the hardcore and punk spectrum, including Converge, Minor Threat, Tragedy, The Cramps, The Exploited, and Discharge. They, along with rhythm section Sean Sakamoto and Chris Dwyer, have managed to create an album that combines these influences thoughtfully and artfully, and is also one of the angriest and most overtly political-sounding punk rock albums of 2020 so far.

The influences of Converge really shine through in G’s vocals on songs like ‘Vulnerable’, while Stevens’ speedy, muscular riffing recalls that of Discharge on ‘Secondary’. The vocals on this album are so shouted and guttural (sometimes near-painfully so) that it’s very difficult to tell what G is singing about most of the time, but titles like ‘Your Best Interest’, ‘Selective Empathy’, and ‘Not Your Decision’ all seem to be alluding to the upheavals besetting Trump’s America and the current US administration’s depredations on individuals’ autonomy. Her voice even takes on a black metal-ish hue on closing track ‘Demons’. Another impressive aspect of Entry’s musicianship is the sheer velocity of Dwyer’s drumming on a song like ‘These Feelings’, which only lasts 70 seconds but sounds like it has virtually double that number of beats crammed into it.

Detriment is a powerful, impressive debut album that gets angrier and more abrasive as it goes along, whilst still retaining melodic edges. If you’re looking for music that reflects the current degenerative, regressive, dangerous state of the world, then this album does that and then some. Fans of the band’s aforementioned core influences are sure to love it. It’s impressive to see a band make one of the best punk albums of 2020 with their debut, even if they are already accomplished musicians, but Entry have indeed achieved that feat. Go listen. And rage. Now.