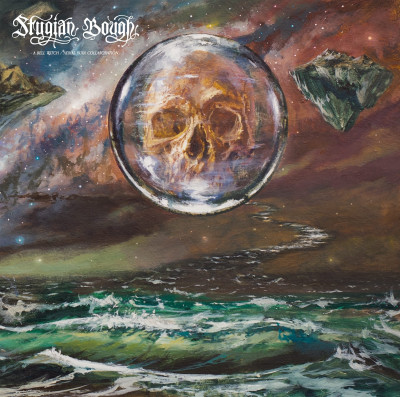 I don’t know about you, but I thought things were bad enough before a plague came and covered over the earth. The weird floating anxiety of the lockdown has definitely stirred the desire to lay down on the ground and not get up. Sink back into the dust and let the grass grow over you, escaping slowly back into the cosmic stream. The epic funeral doom of Bell Witch seems an ideal meditative channel to leave the sadness of the world behind. Pressing you down with a comforting weight. Following the vast Mirror Reaper they continue on their journey to the western lands, this time entering into a full on collaboration with long time honorary member Aerial Ruin.

Here’s where things get a little tangled. Aerial Ruin is the solo acoustic project of Erik Moggridge, who has appeared as a guest on all three previous Bell Witch albums. Rather than just take him on as full time member Stygian Bough aims for a coming together of the two projects, although that telltale ‘Volume 1’ suggests an ongoing collaboration rather than a one off experiment. What this means most obviously is there’s a lot more acoustic guitar and singing than on previous Bell Witch albums, perhaps a little more light and shade. This required an adjustment on my part, I can’t lie.

If I’m being completely honest I had a weird mental block with Mirror Reaper being one single 83 minute long track. I’m not sure why, it isn’t that much longer than Four Phantoms and I always listened to that in one go. I think I found it slippery and hard to grasp, as if I’d never given it its due. So, if you’re also shallow and distractible, rejoice! this new album has as many songs on it as the last two put together. Only it doesn’t, ‘Heaven Torn Low’ is split into two parts and ‘Prelude’ is, as advertised, a scene setting acoustic interlude to prepare us for the mighty closing track ‘The Unbodied Air’. So just the three really. ‘Heaven Torn Low’ seems quite clearly split between the two projects. ‘Part I (the passage)’ is Aerial Ruin, a long slow folk lament. The first time I heard it I was getting impatient for the arrival of the giant doom riff, only slowly realising that it was going to be ‘pt II (the toll)’.

The blending of their two styles is best achieved on the first and last tracks. ‘The Bastard Wind’ and ‘The Unbodied Air’ are suitably monumental chunks of doom that extend some of the ideas on Mirror Reaper and find an even wider horizon for their music by integrating Aerial Ruin’s guitar and vocals. ‘The Bastard Wind’ opens on atmospheric acoustics and hushed singing, comes to a moment of near stillness about four minutes in and then the hammer comes gloriously down. The final track ‘The Unbodied Air’ is the album’s definite high point. The heavy crawl of the first third gives way to an extended central section of beautiful droning organ notes. When it emerges from this contemplative pause it is carried onwards by a melody line that unfurls like a banner against the sunset. Stygian refers to the river Styx, the boundary between earth and the underworld. Bell Witch has always been concerned with the space between life and death but the ending here is almost triumphant, crossing the river with head high, no thought of looking back.

The inspiration for this album stretches back to Moggridge’s first time singing with Bell Witch. ‘Rows (of Endless Waves)’ on their debut Longing concerned a ghost king trapped in the sea, attempting to return to land. Apparently the loose narrative this time sees him turn away from shore, choosing death. If you listen to this kind of stuff you get accustomed to things getting a bit Lord Of The Rings every now and then. Here there are tombs and thrones, swords and epitaphs and so on but it’s not too much. Moggridge’s vocals are soft and clean but not pushed forward, mostly sitting within the overall piece. His singing leans towards the melodic thread more than story telling, all drawn out vowel sounds and soft consonants. Appropriately enough, it’s a kind of keening.

Having taken some elements to an impressive end on Mirror Reaper, Stygian Bough sees a developing collaboration finding new ways forward. I came to this album with expectations of crushing, comforting, doom only to find them somewhat sidestepped. I’ve got to applaud that intent even if I feel it dips a little in the middle. Arriving at the same time as Vile Creature’s remarkable Glory! Glory! Apathy Took Helm! its developments can seem sturdy and the album as a whole surprisingly mellow. Gentle but still epic, Stygian Bough – Volume 1 is not crushing so much as it is meditative. It looks to a path beyond loss, a journey to light and acceptance.