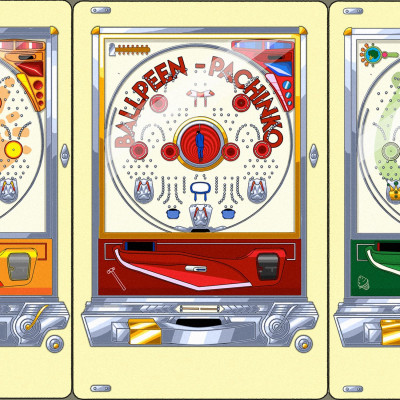 For a fairly small city Newcastle has certainly been punching above its weight in recent years, Pigsx7 might be the band to have achieved the highest profile so far but they come from a busy, healthy underground scene. Toon trio Ballpeen is a relatively new band whose members have been part of that scene and multiple bands for years. Their second full length Pachinko is eight pummelling slabs of raging post hardcore. A fetchingly blood spattered but limited cassette run from local label Cruel Nature, be quick if you need to clutch it in your shaking paw, otherwise a cheap as chips download to crank on your walk ’round the park and get that heart rate up a notch.

‘One Man’s Opinion’ starts in the distance with a feedback whine and knotty combative guitar, the vocal barks “more complex than you could know/ a love that will not relent/ you judge but you don’t understand.” It fully arrives with a roar and a heavy blow after the first verse, a sound straining at the leash, bursting at its seams. ‘Flipper’ starts as a headlong rush of gasping vocals but turns into a dissonant rumble, stretching the tension right out before returning to the closing riff. We’re not even five minutes in. The whole album is over in twenty two minutes, less time than it takes Bell Witch to get up off the couch.

At home mining a seam of favoured bands from the 90’s, Ballpeen are equally at home wearing these influences on their sleeves or across their chest. Their first release Loose Knot nodded reverently to Black Flag in its title and with artwork channelling Raymond Pettibon. This time James Watts provides an even greater sleeve which includes the hanged man image from the earlier one. At first I took it for a pinball machine, it is in fact the titular Pachinko, a Japanese arcade game somewhere between pinball and slots that allows low-level, quasi legal gambling.

The significance of the game is unclear but I like to think it’s just the percussive joy of the way the word sounds. A love of language hinted at in the name of the band and occasional sly pun. Blessed with a Geordie Jazz gag for a title ‘Ornate Coalmen’ sees them explore a more fractured structure. Rolling in on a freeform scree it drops in and out of a tight locked groove and ends on a rising wave of feedback noise. ‘Clocked Out’ is a more straightforward hardcore blast of tension and release. On ‘All, Salt No Slug’ the discordant guitar feels even more to be straining at it’s limit, becoming a vicious static buzz and whine.

Their acknowledged debt to a certain strand of American bands is perhaps clearest on ‘Dairy Queen’ a song named after an iconic fast food chain that’s never made it to the UK. Musically it double scoops that particular flavour as well. For me, I’d be pointing in the direction of NYC psychos Unsane but there are many other reference points available. Moving closer to home maybe Leeds’ Blacklisters are not a hundred miles away. Of course, it could be that it isn’t about fast food chains at all but a love song for a lass who’s especially keen on cheese.

It’s hard to follow the generally barked and submerged vocals, a problem swerved on the short but brilliant ‘Kancho’, an overheated instrumental of dynamic crunch and squeal that really showcases their tight leashed noise. Final tune ‘No Mark’ sees them race off even more desperately in the first half, slowing to a weighty churn for the second. Ballpeen may not be breaking new ground, but their familiarity with the space they’ve staked out results in an effective blast of muscular, chaotic hardcore dragged through the noise rock mud.