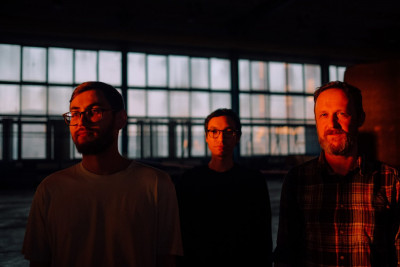 I had this idea about the myth of Sisyphus and how its meaning evolved through generations. It seemed to me that all the work, time, and energy we put in this thing is very similar to Sisyphus' job. We are the writers of our own myths, and today's myths are simply our reality.

Antethic are a Saint Petersburg, Russia based band who have recently released their third full-length album titled Mythographer via Holy Roar Records. The album is a wonderful exploration through the more electronic end of things. It’s adventurous and vast in its sound and feel. At times I was reminded of Mogwai and 65daysofstatic but Antethic’s sound is unique to them and them alone. I caught up with Alexander, Yuri and Konstantin to talk about how the band got started, the writing process, their new album and more…

E&D: How did the three of you meet and how did you come up with the band name Antethic?

Yuri Efremov:
Prior to Antethic me and Alexander played in another band called The Seven Seas. Actually, Antethic was formed in 2012 as a side project, and at first, we didn’t expect it to become our main focus. The Seven Seas disbanded the same year but two of us continued to make music together. Even before Antethic, we had a band together with Konstantin. And then he joined us in early 2016 when we were looking for a bass player. Alexander came up with the band name.

Alexander Lyvov:
The word Antethic is a philosophical term from the vocabulary of the American philosopher Charles Pierce. This is a feminine word, ‘antethics’, a name for a normative science combining logic, ethics, and aesthetics. Pierce is stating that antethics should become a theory of the conformity of an act with a certain idea.

E&D: Did you always know you wanted to play instrumental music?

Konstantin Borisov:
Instrumental music is an option and not a limitation. I play in another band with vocals (WOWOD) and have no personal restrictions on that concern. It is just a different approach for different music.

Yuri Efremov:
Me and Alexander are also playing in a band with vocals (KIROV). I have to say we even considered to add vocals in Antethic at some point. And we did collaborate with the vocalist from Barcelona band Sexores – Emilia – who provided her vocals for our cover of a Mew song ‘New Terrain’. This was a great experiment and you can find this song to check out how Antethic sounds with vocals!

E&D: What influenced/inspired you to play this genre of music?

Yuri Efremov:
I always wanted to be able to implement all sorts of ideas in music, not being limited by any particular genre. I think in Antethic I found this possibility. Inspiration comes from very different sources. I can be inspired by a book or a painting, music of course, especially film scores inspire me more than many types of music.

Konstantin Borisov:
If I like a certain type of music then I can play it regardless of genre.

E&D: You are known for the electronic aspect of your music. In Mythographer, which is also your first album released internationally via Holy Roar Records, you’ve pushed yourselves further into the electronic realm and wonderfully so. Was that a conscious decision or did it just happen?

Konstantin Borisov:
It was a conscious decision. We decided to try writing on different instruments, but for some time together we used electronics whilst also using guitars, bass, drums. Then we removed all unnecessary elements and it turned out that they simply were not needed for this release.

E&D: You released three videos where you talk about your studio process and gear rundowns. It was cool to see. Once live shows start up again, will you bring all that gear with you or will the live shows differ somewhat from the album?

Alexander Lyvov:
Functionally all that was in the videos will be in some form in our live shows. Another thing is that our setup is constantly changing, and no one can say exactly what it will be at the next show.

Yuri Efremov:
It is quite possible that we can rearrange some songs from Mythographer to play it on guitars and drums. It depends on our active setup that we will be using at the time of the tour.

E&D: Can you tell us a bit about the writing process? Does one of you write a lead and everyone else adds to it or are you all in the same room etc?

Yuri Efremov:
There was a time when often I would bring a more or less finished song to rehearsal and we would arrange it properly. But since Ghost Shirt Society we are writing mostly together, and everybody is involved. It is enough for us now to bring just an idea or a certain sound and we can work with it already.

Konstantin Borisov:
Our approach to writing is still old school. We are meeting at rehearsals and begin to make a demo, as a rock band usually does. It seems to me that such a non-standard approach distinguishes us from other electronic music, which is often written at home or in the studio by one person.

E&D: The title of your album is great which means “a writer or collector of myths”. Can you tell us why you chose this title and what myths you are pulling into your album?

Yuri Efremov:
This title was for one of the songs at first, but then we decided that it will much better describe the whole album. I had this idea about the myth of Sisyphus and how its meaning evolved through generations. Other titles also connected to this myth. We were working on this album for a long time and most of the composed material is not included on the record. It seemed to me that all the work, time, and energy we put in this thing is very similar to the Sisyphus job, whose destiny was to roll a rock on the hill forever. After all is passed and the album is out there already, I look at the main title much more positively. We are the writers of our own myths, and today’s myths are simply our reality.

E&D: Are you planning to do any live-streaming once the album is released?

Alexander Lyvov:
Live-streaming, not most likely. But we have a live session video out now.

E&D: Lastly, is there a good book or album you would recommend to fans?

Yuri Efremov:
A book: Werner Herzog – A Guide for the Perplexed: Conversations with Paul Cronin
An album: Tomorrow, In a Year by The Knife

Konstantin Borisov:
A book: Futu. Re by Dmitry Glukhovsky
An album: Absolut by Hvoinaya Vjaz