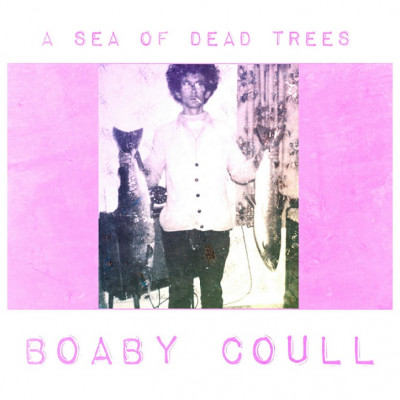 Boaby Coull by A Sea of Dead Trees

Robert Heath is a recording artist from Glasgow, releasing broody shoegaze instrumentals under the name A Sea of Dead Trees. This is his third release, entitled Boaby Coull and Robert cites Have A Nice Life, Godspeed You! Black Emperor and Deafheaven as influences. I wanted to get that out there early doors as this is what caught my eye when selecting this album to review. That, and the fact that Robert is a one man band, using a loop pedal, two guitars, synths and sampled drums to create his music. Once upon a time, this was a road I travelled with a set-up that belied the fact that it was just one person and some savvy footwork creating layers of noise. So, I guess I’m probably going to be a little biased in my review, as Robert is getting to do what I once did before real life got in the way!

The production throughout Boaby Coull is excellent and the live drums provided by Tommy Duffin add some dynamic, which given the music is built up on a bedrock of loops, could possibly become a little too repetitive. Not so, as Robert has a great understanding of dropping in additional sounds and textures to keep you interested. Opening with the title track ‘Boaby Coull’, a gorgeous tune ushered in with a layer of clean guitars that swirl a melancholic melody, you’re instantly drawn in. Robert intricately builds on layers of lovely melodies and sounds and the deep throb that oozed its way in early begins to pulsate louder. When the final organ tones chime in you’re totally enveloped in the enchanting music.

Utlising the kind of horrific samples that Godspeed You! Black Emperor employ, ‘Willowbrook’ darkens the mood and adds drums to the mix of stabbing and swirling guitars, progressively getting louder but never exploding into that epic finale you might be expecting. On the sublime ‘Rufus’, a lush loop of intricate guitars and delightful piano (?) weaves in and out around a swirling bass hum. An undercurrent of scuzzy distorted guitar gives the track some depth and the whole lot is topped off with a majestic organ to stunning effect. The combination of instruments and melodies triggers off a kaleidoscopic audio sensation and those voices you thought you were hearing emerge victoriously.

Foreign voices beam in from far off satellites on ‘SkinHealer’, a woman sounds distressed and the sinister keyboards that throb and twinkle add an eerie atmosphere. Robert effortlessly switches to a more synthetic sound and the pitch shifted keyboard howl that swerves high makes you feel uneasy. He then piles on the heavy guitars and organ and the transportation to a hellish wasteland is complete. ‘Nuclear Peace Time Boys’ manages the strange feat of sounding like Echo and The Bunnymen and Deafheaven. The flickering acoustic guitars and anguished guttural howls from Michael Wiseman weirdly offsetting each other while synths prowl around keeping the whole thing in a menacing loop. By the track’s end the layers of sounds have reached thunderous proportions and you barely notice it happened. ‘The Ballad of Geoff Muldoon’ is a nod to the synthetic sounds of the 80s as Robert spiders out some elegiac tones and heavenly organ for a tragic mini symphony of hurt.

There’s a Phil Spector-esque beat on ‘Hannah’ that shows a knowledge of pop and 80s bands like the aforementioned Bunnymen, or at least that’s what I hear in the guitar tones. Robert knows his way round a set of pedals and I encourage this whole heartedly. Melodies and sounds pour into the mix but don’t outstay their welcome, the temptation to loop forever resisted. The samples on ‘Between Two Worlds’ graphically explain surgery, mercifully they get whipped out quickly, the track left to continue your sense of unease with nipping guitars that bore a hole into your brain. The track is haunting yet oddly comforting as if departed loved ones are sending a message of hope in these exhausting and troubling times.

‘Tulpa’ is a downbeat funereal dirge that hasn’t the same energy as the other tracks, the fires of melody burning less brightly. Album closer ‘My Batteries are Low and It’s Getting Dark’ has a droning acoustic guitar that pulsates as the by now familiar space synth beams in one final melody from a distant planet. Once the afterburners fire up the guitars overtake and steer us into cavernous terrain with twanging guitars and stunning shards of sunlight burst through the clouds to leave you with a feeling of warm euphoria.

Boaby Coull is a rewarding listen and I’m enthralled at Robert’s ability to keep the music engaging, considering the usage of the loop pedal. It’s easy to fall into the trap of allowing the repetition aspect of this music to do the work but the dynamics at play here always keep you intrigued. The melodies are strong and the layers often combine to play on your senses, if you weren’t told this is a one man act, you wouldn’t know. Robert does take his music out into the live setting and I’m sure this will be a marvellous thing to behold. He proudly proclaims in the minimalist press release that A Sea of Dead Trees will go from strength to strength in the next decade. I admire the ambition and wish him well with this, but I know from experience that this particular niche of artistry appeals only to a certain type of person, and there aren’t many of them around. Having said that, Boaby Coull is a fine album and I’ll be keeping an eye out for future releases for sure.