(((O))) Review: The Soft Pink Truth – Shall We Go On Sinning So That Grace May Increase? 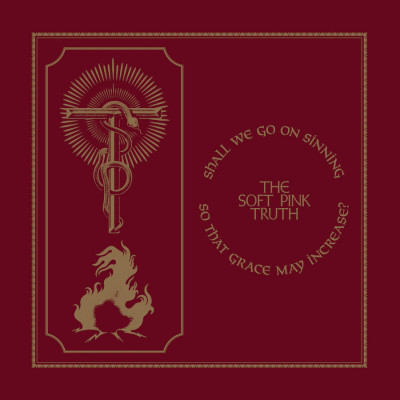 Shall We Go On Sinning So That Grace May Increase? by The Soft Pink Truth

Sometime back at the beginning of this century, shape-shifting producer Mathew Herbert challenged Drew Daniel of Matmos to step out of his comfort zone and come up with a house EP for his label. Daniel accepted and came up with Soft Pink Missy EP. Since then, Daniel came up with a series of albums under The Soft Pink Truth moniker, under which he has turned into a shape-shifter himself. And to be frank, never missed a beat, note, or a tone on any of these releases.

His latest Shall We Go On Sinning So That Grace May Increase? is no exception. Actually it might be his best under the moniker so far. If the title sounds familiar, it is actually a biblical quote from Paul the Apostle. Daniel says he chose it “because it describes a question that he was applying both to his creative practice and how one should live in the world.” He goes on further to explain his purpose here: “The election of Donald Trump made me feel very angry and sad, but I didn’t want to make ‘angry white guy’ music in a purely reactive mode. I felt that I needed to make music through a different process, and to a different emotional outcome, to get past a private feeling of powerlessness by making musical connections with friends and people I admire, to make something that felt socially extended and affirming.”

So how does Daniel approach all these strong feelings musically on this album? By a ‘simple’ process of combining a modern classical approach to techno and IDM. On paper, it certainly sounds like an excellent recipe for falling flat on your face. Luckily, Daniel’s strong feelings made him pick up on every good sense from those and a few other musical approaches in between and come up with one of the best albums of the year. So far or later on, it makes no difference.

The holding glue here is the chorus vocals (Angel Deradoorian of The Dirty Projectors fame being one of them), which Daniel incorporates throughout like some sort of a golden thread that seems to hold seemingly disparate sounds together. What we get on Shall We Go On Sinning So That Grace May Increase? is a mesmerizing musical concoction that expresses exactly what Daniel set out to do. He really needs to come up with something incredible to top this one.