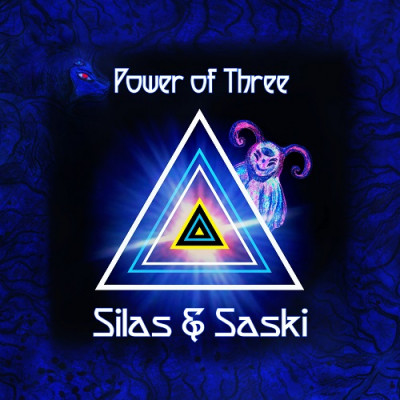 Power Of Three by Silas & Saski

Silas & Saski is a new project from Silas Neptune – best known as keyboard player for space-rock legends Ozric Tentacles – and singer/songwriter Saskia Maxwell, a multi-instrumentalist who has been playing self-penned, folk-inspired music for some time, clocking up hundreds of solo gigs around the UK. Power of Three, a three-track EP, is the duo’s first release, ahead of their first upcoming full-length album, Entertaining Possibilities.

Neptune – son of Ed Wynne, founder and guiding light of Ozric Tentacles, who also contributes some wonderful guitar to this record – has already released an album under his own name, in the shape of the distinctly Ozric-esque The Scales Of Tahuti. His work as part of this newly-formed duo is familiar in sound, but not in shape. Vocals are significant by their almost total absence from the intricate instrumental music made by the Ozrics, and the presence of Saski’s vocals on this record means that the instrumentation can’t always be centre-stage. So whilst the feel is undeniably Ozric-esque, here the freewheeling lead parts work their magic whilst maintaining a calm oasis in the centre of the instrumental storm that Saski’s vocals can inhabit. If this sounds like a shortcoming – as if Saski’s presence somehow inhibits proceedings – then it most certainly isn’t; it’s a change of approach, a decision to plot a new course, rather than shoehorn a new element into proceedings. Saski’s lyrics, and her ethereal vocals – pitched somewhere between Kate Bush and the folk stylings of Cara Dillon – are very much at the heart of what the duo have wrought here.

Silas & Saski’s sonic world – like the Ozrics – is very much rooted in nature; opening track ‘Magic of Words’ opens with birdsong. “And so it begins…“, intones Maxwell, as the first track on the duo’s first release gathers momentum. ‘Magic of Words’ is a dazzling way to state their intent: instrumentally, it’s as irresistibly atmospheric, and as dextrous and intricate as an Ozrics record, or Neptune’s own Scales Of Tahuti. Yet the kaleidoscopic music never overshadows Maxwell’s vocals, or clutters the shape of the song. This opening salvo contains everything you may know and love about the Ozrics and their music, yet Maxwell’s contributions bring a new and intriguing element to the overall sound.

Second track ‘In Reverse’ echoes the spacey dub that has often been a feature of the Ozrics catalogue, yet again the track is constructed in such a way that it never gets in the way of Maxwell’s dreamy vocal. It also manages to squeeze in a showstopping multi-part guitar solo before the track evaporates into the ether. The closing title track opens with shimmering synth that sets the stage for Maxwell’s wonderfully flexible vocal, before the track sets determinedly off for deep space, flirting with squelching acid techno, yielding to a flute solo from Maxwell and choppy distorted guitar before ebbing to a close, leaving the listener suspended in space. These tracks are replete with extraordinary detail, another Ozric tradition that is well served by this EP.

Power of Three is a very promising start to Silas & Saski’s catalogue. Based on this evidence, the duo won’t find it difficult to hold our attention over a longer duration when Entertaining Possibilities – a great play on words there – arrives. An intriguing and entrancing record, this EP is an involving first chapter, the first bold step on what will undoubtedly be a joyous technicolour journey into outer – and perhaps inner – space.