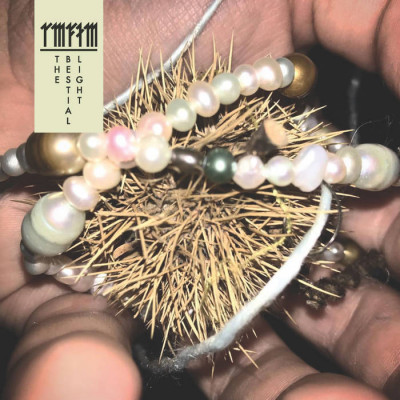 The Bestial Light by Radar Men From The Moon

The Bestial Light for me is a fucking godsend. I’ve been craving an album like this for a while. Thought-provoking, twisted and relentless. A lot of bands try and go to where Radar Men From The Moon go on this album and they’ve pretty much always failed. You can tell these guys have been spending a lot of time with Gnod, I don’t remember the last Radar Men album being anywhere near as gnarly as The Bestial Light, even though Subversive III was fucking excellent as well. Straight out of the gate, Record of The Year candidate.

‘Breeding’ initially struck me as being reminiscent of the spectacular ‘Makeshift Swahili’ by This Heat, something about the way the guitar crawls in as the notes are simultaneously stretched and bent. The drums also stand out as being unrepentantly mechanistic and tribal which anyone else who enjoyed Temple Ov BVV, their collaboration with the almighty Gnod, will appreciate I’m sure. When this track hits it’s crescendo, it feels like being slammed over the head with a stack of books. The screaming is fucking great. I can’t really say anything else about this other than, it made me instantly fall in love with this album.

Just when you think you’re gonna get some respite, track two ‘Piss Christ’ comes bounding in with a relentless bassline and several layers of unsettling fuckery. The lyrics really stand out in this, here is one excerpt I particularly enjoyed: “in the end, we all shit and bleed right here in our mother’s womb”. The vocals again, are really magnetic, so satisfyingly raw and alluring. This is the right way to make intense music. The production sounds amazing, you can definitely hear the genius of Bob de Wit on there.

The third track, ‘Sacred Cunt of The Universe’ unravels the album and takes it into a different direction. Finally, we are given a chance to hear each of the contributing members standing in a more isolated space. The saxophone playing sounds very akin to the playing on Gnod’s Infinity Machines, I wonder if it’s the same person or if it’s a result of the two bands coalescing and collaborating. There’s a sense of oasis or respite in the track but, in the context of the album, it feels more like slumping down in despair after lashing out in a frenzy.

‘Eden in Reverse’ is very much the afterbirth of ‘Sacred Cunt of The Universe’, it lunges at the listener, in a manner very much akin to ‘Breeding’ but, I think it’s probably my favourite song on the album. It’s again, largely due to the vocals, not that every single facet isn’t excellent but, the crescendo around the 3:30 mark just has some of the most like toe-tappingly, attitude-soaked, squalls I’ve ever heard. It’s so catchy and so intense, I don’t have any clue what the lyrics are in the section but, I really love it. It’s very important to have expressive and emotive vocals when you want to actually make people have any kind of emotive response to your music, a lot of psych bands are guilty of having the same slightly lysergic drawl through every track, generic, supposedly mysterious performances that feel very restrained and monotonous. If post-rock taught us anything it was that you don’t have to have a vocalist to make excellent top-line melodies and that when a genre becomes played out and repetitive, it’s time to change. Radar Men From The Moon are singular and boundary-shattering. They’ve taken tropes from many of the scenes they were playing in and they’ve transformed them into a vessel for progress.

The album’s title track is a perfect encapsulation of everything The Bestial Light accomplishes as an album. It starts off with the kind of vocals I was just criticising, albeit in an intriguing Dutch accent, the lyrics are surreal and fascinating but, again highly scatological and sexualised: “see the world as it is, fetishise the smell of piss”. Far be it from me to comment on the kinks of others but, at least it’s not boring. The riff that follows is so fucking great, I love the fucking full-band pummelling that’s going on in this section. Five bullets a round, each instrument a machine gun. Awesome. I love the sounds coming out of what I assume is a synth or a heavily processed guitar that sound like spine-curdling computer glitches. A little bit of this track can be seen on every other track on the album, whether it’s the sparsity of track three or the brutal riffary of ‘Breeding’ and ‘Eden in Reverse’ or the lyrics most clearly in the next track ‘Self’, which digs further into the mindset of the album with more self-care techniques and healthy sexual discourse.

The penultimate track ‘Pleasure’ has an absolutely mesmerising bassline, it’s so catchy as well and again, so vicious. I’m at the point now where I’m running out of things to say that aren’t, I fucking love The Bestial Light, it’s probably my album of the year. Absolute fucking work of art. ‘Levelling’ closes out the album and it describes my state of being or that of the general populous accurately as follows “reduced to dust”.

Radar Men From The Moon have outdone themselves with this one and that’s no easy feat. The Bestial Light has to be one of the most brilliantly deranged pieces of music I’ve ever heard. Go now and bask in its glory or…its piss, whatever you prefer.