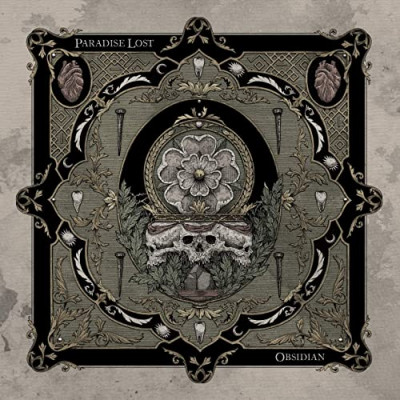 The last few years have been kind to Yorkshire veterans Paradise Lost. With 2015’s The Plague Within seen as one of the best alums of the band’s career, and 2017’s follow up Medusa similarly well received, the grand old men of British doom metal seemed to be hitting a run of form. Obsidian is a different beast however. Their recent success has hinged on a return to the death-doom roots of the band’s early days, with Nick Holmes rediscovering the ferocious snarl of 1991 breakthrough Gothic. Obsidian does not do away with that side of the band altogether – this is still a heavy album – but does bring in some of the more goth tendencies so maligned of the band’s more diehard metal fans in the late 90s. For many Obsidian may feel like a worrying regression.

Personally though, Paradise Lost have always felt like a better band when they are pushing boundaries, and Obsidian is no exception. The band feel assured here, they know what they want to do and they pull it off to perfection. From the time the gentle piano and strings and whispered vocals eventually give way into ferocious anger around half way through opener ‘Darker Thoughts’, the unremitting bleakness rarely lets up, but it feels like throughout the band are finding exciting new shades of black. This is a varied album, but one that maintains its clear gloomy focus throughout. Lead single ‘Fall From Grace’ shows off exactly what the band are all about, with its chunky central riff, gentle chorus and haunting bridge giving a clear indication of the band’s influences. It really is Paradise Lost at their purest form.

‘Ghosts’ however is the band at their most goth. A veritable dancefloor filler, it may worry the more extreme metal fans if it wasn’t such a damn good song. It’s the furthest extreme the band reach on this album, although the epically triumphant ‘Endings Days’ and the relatively clean ‘Forsaken’ (with its overblown choral introduction) both come rather close. They don’t reach the extremes of 1999’s much maligned album Host, but it feels more organic, a more comfortable fit for the band.

For those who prefer the heavier end of the band, the shrieking guitars of ‘The Devil Embraced’ and the desolate brutality of ‘Serenity’ have you covered. The slowly chugging juggernaut of closer ‘Ravenghast’ is perhaps the highlight here though, with Holmes snarling “your infernal kingdom wept” like a deranged beast. There’s a dirtiness here, the band’s rougher edges may have been toned down somewhat but there is still clearly a lot of anger still seething away.

Having gained back so many fans, it would have been so easy for the band to coast on their success, remaking the same album over and over for the rest of their career. Obsidian is not that however. It’s Paradise Lost evolved, yet somehow in their purest form, angry and dirty yes but with that gothic veneer that’s clearly just as essential to the band’s identity. It would mean nothing if Obsidian did not have the songs of course, but it most certainly does. The band will and should continue to grow with each record, but if you want the archetypal Paradise Lost album it’s right here, and it’s magnificent.