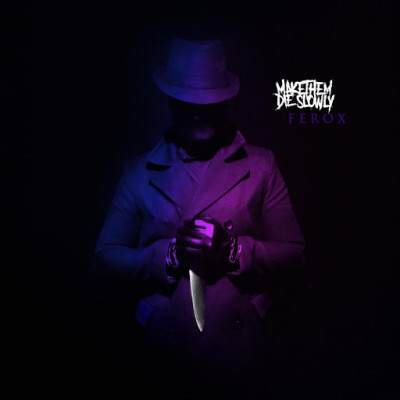 Ferox by Make Them Die Slowly

Multi-instrumentalist and prolific producer Mick Kenney has been teasing a new kind of horror for some time now. Briefly known at one point as Melas Khole, Mick’s new band Make Them Die Slowly are a celebration of vintage gore movies and all things shockingly macabre. At the helm is vocalist/lyricist Duncan Wilkins aka Drunk of Birmingham crust punkers Fukpig and Anaal Nathrakh live bassist and produced by Kenney, who also takes care of recording duties. Donning the trench coat and hat for the striking front cover of debut album Ferox, Wilkins becomes ‘The Void’ to lead us in this frantic dash through ten sadistic and blood-soaked tracks.

Named after the US title of Italian horror movie Cannibal Ferox, Make Them Die Slowly offer up a visceral cacophony of extreme metal by the bucket load. Musically MTDS are in the same vein as Kenney’s main weapon Anaal Nathrakh, except this sacrificial vein has been injected with a heavy dose of melody and then brutally slashed open to bleed out a different yet equally terrifying beast. Imagine the uncaged lovechild of Anaal Nathrakh and Fukpig swimming gleefully in a pool of crimson.

Intro ‘Profonde Tenebre’ opens with a stern warning soundbyte from British Board of Film Classification’s Simon Bates and a crescendo building snippet of wailing guitars before easing neatly into first track ‘Murder Night’, which smacks with bruises instantly with its salvo of blastbeats and fiery riffage. A melodic chorus of lightning tremolos and galloping beats adds a sing-along respite between the furnace of rage. ‘Demoni’ begins in an eerily beautiful way with a short piano intro and a quote from Lamberto Bava’s splatter movie classic Demons. The soul-enhancing ambient hook from the intro appears again during the chorus sections as a peaceful inhalation of calm contrasting the exhalation of chaos around it.

‘Pieces’ is that carnage-inflicting buzzsaw of a track that rips and tears through several layers of brutality and serves as The Void’s finest vocal performance, channelling the most spite-fueled of oral vitriol. ‘Of Jackal And Demon Born’ may be one of Kenney’s most masterful tracks, with several audial callbacks similar to his old Dante inspired project Professor Fate… at least I got that feeling. The same can be said for the albums swansong, ‘Murder Night (The Final Girl)’, a slow and sinister crawl into safety and a grandiose song packed with choirs, epic choruses and evocative sounds. More of this cinematic music featured in future releases would be a personal treat as Kenney has an undeniable knack for this as well as the utterly extreme.

In terms of composition Ferox has of course had Kenney’s necro touch so MTDS will draw obvious comparisons with Anaal Nathrakh. Speaking to The Void recently he told me the set-up is similar to that of Nathrakh’s, as in he deals with lyrics, vocals and samples and Kenney sorts out the musical and production side. The Void’s blood-spat vocals were recorded over six days in the confines of his own home, in what I imagine was a very dark room with hanging razor blades. The lyrical content, audial touches and other horror inspired nuances transform this into its own commendable entity. Kenney’s volts of life have made this a living, breathing monster for The Void to shape into his own incarnation of fear.

With every new band there is a certain amount of purpose to define with a debut and the new gruesome twosome of Kenney and Wilkins have done a stellar job of cementing a look and feel of their new project, from the sinister cover art to the grainy 80s VHS promos. A recent cryptic band photo revealed four masked individuals, so there may be plans to take this to the stage once life returns to normal, or just a classic horror red herring. For now The Void wants MTDS to be shrouded in a little mystery, just like every popular neighbourhood masked slasher villain does. If the music on show here is anything to go by, we will have the sweetest of necro-atrocities awaiting us when the new Anaal Nathrakh album drops, but for now we have this gory gem to satiate our blood-lust. Ferox is a ferocious album full of wicked extremity, catchy memorable grooves, and importantly, it’s a damn fun listen.