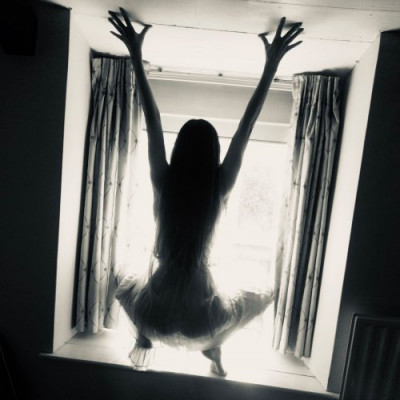 Liar, Flower is a new band from Katiejane Garside and Chris Whittingham. Katiejane will be familiar to many as the front woman with both Daisy Chainsaw and Queenadreena, two of the nineties most singular and influential rock acts. Katiejane is considered one of the key instigators of the riot girl scene and her manic style of performances and image, resembling Miss Haversham’s feral teenage granddaughter, continues to inspire female artists to this day.

On Ruby Throat’s three albums of neo-folk, Katiejane has explored a quieter, though no less gothic seam of influences, utilising the beautiful, almost childlike tones in her voice, but on one listen to lead single ‘My Brain Is Lit Like An Airport’ it’s clear that the inner rock animal was always lurking underneath, as vital as ever. Katiejane’s voice is one of the most instantly recognisable in rock and to hear it in full effect will produce a Proustian rush of youthful adrenaline to anyone who remembers ‘Love Your Money’ or ‘Pretty Like Drugs’.

Katiejane has said of the creation of Geiger Counter –

“i found her one day in a notebook, she spoke of a new chapter and the dropping away of – tenure

she likes to make noise

this record was conceived and collected through a year of submersive meditation, trance and improvisation, insisted by my bird bones insisting, i went down deep into the soil, set alight corrupt files and malware, something needed routing out taking me ever deeper…”

That mixture of language, the spirituality, the earthiness and the violent influence of modernity are all present within the music and lyrics on the album and although the songs mostly stick to a strict regimen of quiet/loud, the music is an ever shifting sonic patchwork quilt. Considering the whole record was recorded, mixed and mastered by the pair, who have lived on a sailing boat for many years, is a major triumph – it’s one of the richest, artful and affecting albums I have heard this year.  Chris Whittingham’s guitars are built up to psychedelic layers of bristling repetition, but can also pick out sweet bucolic melodies, the music can glitch and twitch with both modern and antique damage whilst Katiejane sings, as ever, as if her life depends upon it. As to what she is singing about, well, I won’t attempt to analyse that, apart from to relay that ‘My Brain…’ is apparently about the battle with ego.

Katiejane’s lyrics are an absorbing mixture of darkly comic near-nonsense in the old English tradition of Lewis Carroll and the cut and paste impressionism of William Burroughs. As a consequence, the two records that Geiger Counter most closely resembles, for me, are Alice by Tom Waits and Surfer Rosa by Pixies. The whole album is infused with the twisted sensuality found on both records and Chris does a mean impersonation of Marc Ribot’s deranged cabaret-style plucking on several tunes. In fact both the giddy ‘Little Brown Shoe’ and the following haunted, waltzing ‘Baby Teeth’ display the obvious debt both Ruby Throat and Liar, Flower owe to Waits later works.

The one track that seems entirely divorced from the bands previous work is the gorgeous ‘9N AFE’ – a dreamlike swelter of primal ambiance, with Katiejane’s voice multi-layered and echoing over drones, guitar squalls and tribal, skeletal percussion. Imagine Jane’s Addiction covering The Cocteau Twins and you’re nearly there.

You may find it’s the noisy tracks that reel you in at first but the quality of the folkier numbers won’t take long to become apparent. A good comparison would be Emilíana Torrini’s Fisherman’s Woman, a very pretty-on-the-surface set of traditional songs with a dark undertow. ‘Lifesaver’ from that album has the sound of creaking wooden beams, signifying a hanged body, twisting on a noose and there are ambient noises, possibly caught from recordings on their boat that add an extra physical presence to the hushed, softer moments, such as on the remarkable ‘Broken Light’. This song is one of the most obvious examples of the lyrical juxtapositions of the desire for peace and the natural world set against a past of modern, migraine-inducing mania “walk with me through the flowers and the light” set against “I was in a band called ‘where’s my fucking phone!’…”

Geiger Counter is a work of revelation, purge and covenant and as Katiejane says –
“there is a prescience to this record that we are not entirely sure what to do with“. That reveals both the certainty and uncertainty at the heart of this record, capturing the feelings of many of us in these unprecedented times. I cannot imagine why anyone wouldn’t want to experience this album. It speaks to us in a secret language we all somehow understand.

Geiger Counter is available for download now and a lavish limited edition of the physical version of the album with art prints and bonus songs can be pre-ordered from their record label.