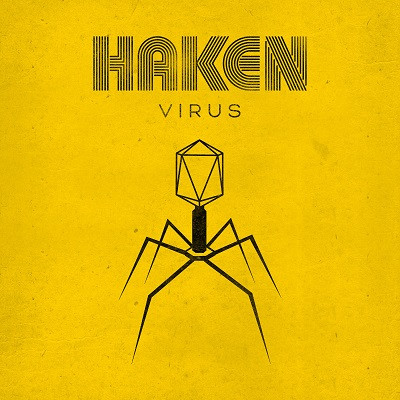 It’s been two years since Haken have unleashed a new album since their previous two studio albums from 2016 to 2018 entitled Affinity and Vector. Now, in 2020, despite the situation of what’s going on between COVID-19 and the quarantine situation, music can lift us up throughout these difficult times. And for Haken, they’re not backing down without a fight. And this time they have brought along some battering rams to push the doors down with their latest release, Virus. Released on the InsideOut label, Virus tackles the subjects of someone coming into power that is filled with corruption, greed, dictatorship, and ruling with a mighty fist. But it comes with a heavy price. And once that happens, the crowds will turn against you with violence and destruction.

I first became aware of Haken’s music back in the winter of 2013 after hearing their song ‘Nocturnal Conspiracy’ on Tony Romero’s Saturday Morning radio show which I believe it was on the House of Prog website. The song was taken from their second studio album Visions released in 2011 on the Sensory label which covers the progressive metal genre. And also a division of The Laser’s Edge label. That song just took me by surprise when I first heard it nearly seven years ago. It had these mellowing moments, odd time changes, incredible vocalisations, and some of the most intensive arrangements that just blew me away from start to finish. It punched me in the gut real hard to discover this six piece band that wasn’t just putting icing on the red velvet cake, but adding a little spice to it.

Now I have to admit, I was very disappointed with their previous albums that were released after The Mountain. I had felt that the band were about to throw the genre and were about to move away from it to do something else. I came this close to put a stop sign towards them to say “What are you doing? This is not what you’re doing”. It was almost as if they were about to throw baby Moses out of the basket and replace it with someone else to head towards the river instead. But I kept on holding the ropes on this tight leash with their latest release this year. And it finally showed that Haken are returning back to their roots with their first three albums.

It just goes to show that the sextet have brought enough ammunition to fire those guns at a maximum volume. And to be allowed to have Adam “Nolly” Getgood, former member of Periphery to handle the mixing of the new album, it shows that he and the band members have a good combination by working together as a team. This time, they’ve unleashed the monster to raise some hell.

From the opening structure of ‘Prosthetic’ with this rumbling earthquake from guitars and Raymond Hearne’s drumming, it kicks everything into overdrive. You can imagine the machines are pounding the doors down with a hardcore punch. At first, I almost thought they went death metal on this track, but Ross comes out swinging as Green’s bass gives a quick second for a metallic crunch before Richard Henshall and Charlie Griffiths share this dueling challenge between the riffs, leads, and rhythm sections on their guitars.

You can imagine they’re bringing the house down with these arpeggiated textures that just took me by surprise while the 10-minute piece of ‘Carousel’ starts out as a ballad that is set in this dystopian landscape before going into this heavier lift as Griffiths and Henshall take it a step further. Ross gives them the chance to shine throughout their amps and set through massive chaos. It builds up these sections throughout their solo’s and riff’s that become a mysterious doorway to have those guns firing into the battlefield. And then all of a sudden, the mood changes as if the storm has cleared for Green’s bass to step up for the challenge to give the double guitarists a chance to make the jump to light speed.

‘Canary Yellow’ tackles the subject of nuclear war. Ross tells the listener on what is about to happen right now for this family that is right in the middle of the danger that happening in their own parallel universe. It has these mournful scenarios as the big mushroom cloud lifts up in the sky by laying waste to the neighbourhood while the music itself sets the doomsday clock to strike. And now we have come to the 17-minute suite, ‘Messiah Complex’. Here, Haken pushes the envelope even further with a vengeance to bring to the end of the demise of the Cockroach King. It is set in five parts and watching the King himself seeing his own Xanadu collapse right before his eyes.

‘Ivory Tower’ sets up this overture-sque from this intensive guitar and keyboard lines setting up the war with this massive destruction to bring the emperor down before his knees to show what he has done to the city as he uses it for corruption instead arts, science and the industry itself. You can imagine yourself being in the middle of this battlefield that’s going on and not knowing who to trust, them or the Emperor in his war room.

Both ‘A Glutton for Punishment’ and ‘Marigold’ go into this heavier symphonic texture and punching more of those metallic lines. It’s almost as if the Amputechture-era of The Mars Volta have lend the band members a helping hand to give them more ammunition by firing those machine guns with a big blast. And carrying a bit of not just Omar Rodriguez-Lopez’s playing, but the styles of Iron Maiden’s Dave Murray and Adrian Smith thrown into the mix.

It then segues into ‘The Sect’. You can hear some of the reprised lyrics of Cockroach King in the beginning of the song as the alarms blare at a higher level by adding the creepiness into the building before this insane twist of the sounds of the original NES system as they go into this hay-wiring effect of the 8-bit score. And throwing in some stop-and-go sections, it is an insane yet wacky moment from the suite. The closing piece of ‘Ectobius Rex’ has shown that the King has been captured as his followers are sentencing him to death. The heat gage level has finally increased the guitar structures as his empire is collapsed in ruins. Now with his followers not knowing what to do next, it all comes to ahead in the finale, ‘Only Stars’.

This is Haken’s answer to Anathema’s We’re Here Because We’re Here-era by channeling the segments of ‘Universal’ that Ross channels his vocal styles of Vincent Cavanugh with this eerie lullaby by bringing it full circle. It gives us a chance to know that the people are now starting a new chapter in their lives after taking down the Cockroach King. But the memories will haunt them, for years and years to come.

Virus took me about five to ten listens. And it took a while on whether I was going to accept their new release or not. But after the eleventh time, I fell in love with it immediately. Because it showed that not only their returning back to their roots, but knowing they wanted to complete the story of the Cockroach King.

It almost reminded very similar back 12 years ago when Metallica released their ninth studio album, Death Magnetic. And I welcomed their return back to their thrash roots where they had left off during Ride The Lightning. And bits of the Black Album thrown in there as well. Not to mention a few hiccups they had during the late ‘90s and early 2000s. It’s the same thing with Virus, it showed that the band are back in action once again. And in the words of Steve Winwood, “Who knows what tomorrow may bring?” We may never know what Haken will do next. Who knows what the roaring ‘20s will bring to them in the next years to come. But Virus is a big giant step for them to be on, the next adventure that await not for the band, but for the audience as well.