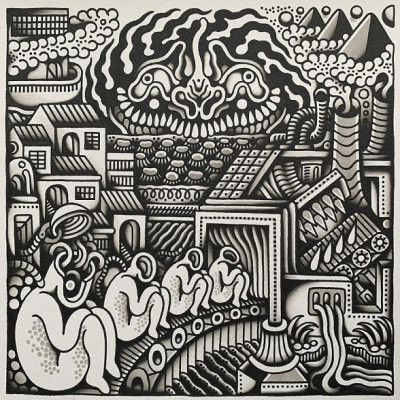 Watford’s Gold Key came to my attention last year as touring buddies with Bossk. Their song ‘Sneaker’ from debut album Hello, Phantom landed firmly into my head as one to remember and when they teased us with ‘Sweet Darkness’ I knew to look out for their second album Panic Machine. Well, here it is, recorded in isolation in Wales, before isolation took on a whole new and disturbing meaning. It’s as if the quartet of Steve Sears (Vocals/guitar), Laurent Barnard (guitar), James Leach (bass) and Jack Kenny (drums) have time travelled as this album is imbued with a lot of nervous energy and themes of anxiety. It is also bursting full of tremendous melodies and wonderful sounds, so don’t disappear just yet.

Crawling up from the ground with a sense of unease comes the aforementioned opener ‘Sweet Darkness’. The kick drum taps a nervous beat under swirling keys(?) and languid guitars before heading full swing in with heavy guitars that duel with Kenny’s pummelling drums while Barnard(or Sears) pick out elegant notes. Steve’s voice is a marvellous rasp that frequently soars into a breaking falsetto. His stunning voice is equal parts Greg Puciato (Dillinger Escape Plan) and Matt Bellamy, yet with the soulful tones of Glen Hansard. When Sears croons “Sweet Darkness” it tears at your heart. If this song is your introduction to Gold Key, you’ll be hooked, it’s nigh on perfection.

The urgent ‘Don’t Sleep’ is a skittery, nervous bag of snaking riffs and scary voices whispering “I don’t sleep, I cannot, I don’t sleep” in your ear. Think Rocket From The Crypt’s ‘On A Rope’ infused with Dillinger Escape Plan’s noise rock anarchy. After the one-two punches of the first two songs, the calming ‘Shallows’ is a piano ballad with experimental voices that branches out into a kaleidoscope of beautiful guitars and it’s all superbly melodic. The influences are many (a heavy nod to Pink Floyd here I think) but Gold Key have their own sound and it’s distinct. As the song builds to a heavier finale the guitars layer up with melody and the sounds expand to stunning effect.

On occasion Irish indie rockers The Frames (fronted by the aforementioned Hansard feller) would allow themselves to turn the amps up to 11 and rock out. I hear a lot of this in ‘Mechanical World’, stellar melodies pumped through Marshall stacks and you wonder why Gold Key aren’t filling stadiums already with songs this good. The combination of hefty riffs and marvellous melody is glorious and hugely addictive. Another band to reference is Deftones and their knack of having delicate guitars infused with crushing riffs, pounding drums and sweet tender melodies. On ‘Trick Of The Light’ Gold Key lock down into some pulsating grooves that allow Sears to showcase his range and he really excels with an impassioned vocal that teeters on the edge. The guitar sounds throughout this song are utterly sublime and the bass and drums underpin the whole thing with thunderous intent.

One of the most commercially appealing songs on the album and surely the one to break this band is the stunning ‘Enceladus’. With a heart breaking melody the song has more hooks than some band’s careers and the soaring vocals in the chorus are immense. Barnard does an incredible job with his guitar work yielding some amazing textures and sounds. Given the right connection, this song will be heard and enjoyed by millions, it is seriously fucking special. Barnard is allowed to roam freely over the tender ballad that is ‘Strain’ with some odd sounds that give the straightforward song an edge. When the track inevitably erupts at the last the guitars are nice and heavy but the song loses none of it’s tenderness.

Odd time signatures and a myriad of riffs and weird sounds jag and pop the twitchy ‘Fly Into The Sun’, one of the lesser songs on the album, yet it still has a marvellous soaring chorus and spectacular freeform ending. The acoustic ballad ‘A Crack In The Earth’ moves the mask a little on Sears’ vocals in falsetto mode, he doesn’t always quite get those high notes and the heavier guitars tend to cover that up. ‘Human’ is jagged and unruly only settling on the chorus that dips slightly beneath the other songs and their high quality tunes. Interlude ‘Millions’ is a pointless but mercifully short trip of blistering drums and squealing noises. Thankfully final song ‘The Best Of Luck’ reigns in the experimentation and revisits the classy guitar textures, sublime soaring vocals and a massive killer chorus that leaves us in no doubt that these guys can write great songs. Infusing Pink Floyd’s regal guitars and epic sweeping sounds with Dillinger Escape Plan’s ludicrous angular venomous onslaught (two polar opposites) is a neat feat and Gold Key absolutely nail it.

After one listen I was hooked on this album and knew it was going to be getting some serious repeat plays. The songs are tight, crunchy, heavy and bursting with melody and stunning guitar sounds. Despite the band’s PR blurb trying to steer me into other thoughts, I found the album uplifting and full of hope despite the band’s mind-set. It’s good to find that ‘Sneaker’ wasn’t a fluke and I must revisit Hello, Phantom again. Despite the second half of the album’s slight dip in form, Panic Machine is for me, one of the year’s finest albums.