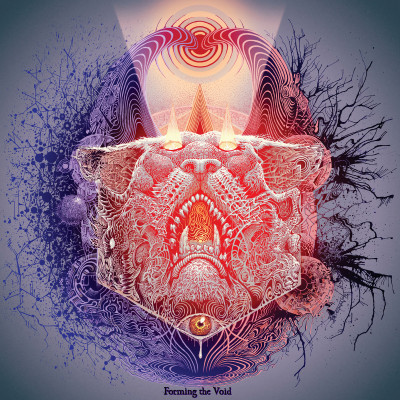 by Forming the Void

Louisiana’s Forming the Void release fourth album Reverie on the back of their third album Rift, which achieved both critical acclaim and the Doom Charts top spot. Not only do the band have to build on that feat, they have-to follow an album cover that has a mammoth flying out of a volcano!

No pressure then, but in-order to build on previous successes, and arguably more importantly, to keep the music progressing in an upward direction, they name their fourth album about a state of being pleasantly lost in one’s thoughts and accompany it with an extremely bright and eye-catching cover of a tiger’s face inside a cube. This does give you a slight clue that the band will be taking their sound into a slightly more cosmic and progressive rock directions.

I have always thought Forming the Void have the potential to go to even higher places than what they have ventured in so far. And on Reverie they do indeed up the level several notches with their blend of heavy doom, sludgy riffs, cosmic tinged- psychedelic metal, and progressive rock touches, but this time they fly even higher with a deftly touch of Eastern sounding influences. Yes, the drums still thump and there is great thick fuzzy bass thunder urging it all along for all the right ingredients of a good head nod, but the guitars provide many different intriguing textures across the album, which indicates this is the sound of a band evolving admirably.

This is most effectively achieved on ‘Trace the Omens’ as a hefty rolling bass line is the solid backdrop as swirling guitar licks are indeed ideal for taking you into your own headspace. It also has the right amount of fuzz so it never drenches out all the subtle guitar textures. Another album highlight ‘Manifest’ has the double whammy effect of inviting you to lose-yourself in their musical orbit while they are-able to maintain a heavy groove.

This ability by Forming the Void to take their sound into subtle, delicate soundscapes for aural drifting is achieved by interesting tempo changes, off-set with purposeful riffage. This works a treat on ‘Ancient Satellite’, which combines psychedelic drift with powerful doomy hard rocking. While ‘Onward through the haze’ juxtaposes their softer elements with a thunderous stoner rock storm of charging fuzz.

The music they have created on Reverie has rocketed to a new level while the vocals tones and delivery have remained more-or less the same. This does prevent taking the album into even greater stratospheric heights. Why have the vocals been more of an issue for me this time around? It could be I’ve been listening a lot to the remarkable new Elephant Tree album (Habits), where they achieve both a stunning sonic sound and vocal harmonies which make you feel like you are floating. Or, maybe it’s the increased musical quality by Forming the Void on Reverie which the additional delicate guitar sprinkling of the afore-mentioned Eastern influences has led to the requirement needed for more variation in vocal tones and delivery. The thought occurs how would these tracks sound if they had included wider in scope harmonies.

This does sound harsh, and I don’t mean it to be, because Reverie is the sound of a good band spreading their wings out and taking their sound into a very expansive and interesting direction, and despite my possibly pedantic vocal misgivings, this is arguably their best album to date, and deserves your attention.