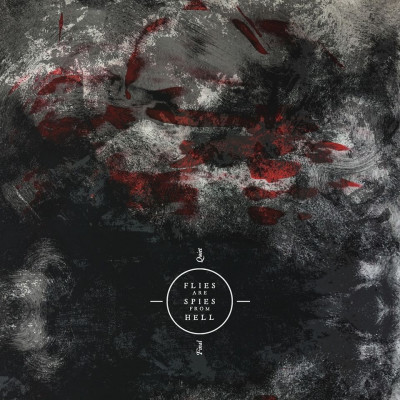 Final Quiet by Flies Are Spies From Hell

There was, a while ago, a rather scurrilous satire/arts review mag called, if I recall correctly, Stool Pigeon. It had a regular column in which they derided each and every review they found which contained the phrase ‘achingly beautiful’. And quite rightly, too. It’s a phrase which should be crumpled up into a tight ball and tossed into the bin marked ‘HACKNEYED CLICHES’. But, y’know, sometimes…

Well, anyway. Here we are.

It’s been five years, almost exactly, since Flies are Spies from Hell released their last proper album, Underdog Underfoot. Five years since they made me cry[1]. Five years since I told you all about it here at E&D. And now, at last, they’re back with a new record and it only seems appropriate that I should see if they can do it again.

Of course they can. And it doesn’t take long, either.

Before I go on, I’d better say a few words about Flies… for any newbies out there. They’re from London and they play post rock. They’re not subverting the genre in any significant way, but they do it better than most. Also, they have THAT piano. The strong classical influence. Others have offered a Chopin comparison, and who am I to argue[2]?

First song, ‘Nearly Saw a Light’. Two and a half minutes in, after a lovely, but perfectly standard, Flies intro – the chiming guitars, the twinkling piano, you’ll know what I mean – it all goes away except for a delicate piano/bass combo, and then it’s just Fred at the piano and that moment of aching beauty and something down near my diaphragm tightens and my lachrymal glands[3] tingle and there we go… Then it all starts coming back, as things do in post-rock, building layer upon layer towards a restrained climax. They could’ve gone all out with crashing piano and screaming guitars, but they don’t, and that’s nice.

The start of song 2, ‘Last Hour’, for some reason, puts me in mind of falling rain and water trickling over pebbles. For a bit, anyway. Then it becomes what is, in a way, the archetypal Flies song. The piano/guitar interplay, the marching drums, the build-up and the climax[4]. It’s rousing and energetic , but it’s too short. I want it to be longer.

And now the mood changes. The first half of the record is typical Flies, uplifting, joyful and optimistic. From here on, though, we get into darker territory.

‘Afloat Apart’ offers a brief moment of gentle reflection before ‘Always Bereaved’, the longest song on the album at nearly 10 minutes. It’s sombre and gloomy, tense and foreboding. Something about it makes me want to chew my fingernails nervously, to look backwards over my shoulder. It’s certainly one of Flies’ less joyful songs, almost funereal in parts, but no less effective for all that. When I first listened to it, I thought it was too long, that it had said all it needed to say in half the time, but I was wrong. It’s just as long as it needs to be.

The first half of ‘All the Smiles at Night’ maintains the downbeat mood. It has an aura of sadness and ennui about it, listlessness and despair. But oh, so beautifully done. But it’s not all gloom. The second half seems more hopeful, throwing some light into the darkness, ending with some triumphant final chords…

…and segueing directly into the closing piece, ‘Lost by Morning’, a delicate and heartbreakingly lovely little solo piano thing, fading away into silence.

Final Quiet is, overall, less exuberant than its predecessors. Still, it is, with that instantly recognisable piano, unmistakably Flies Are Spies From Hell doing what they do best, albeit in a slightly darker mood than usual. I wonder, listening to the record and reading the song titles, if they were writing from a troubled place. There’s a feeling of sadness about the latter part of the record, as if something – or someone – important has been lost, and the music is a way of trying to ease the pain.

I have no idea if any of the above is at all accurate. I don’t know the band personally and I have no idea of their lives. I could be barking up the entirely wrong tree. I can only tell you how the music makes ME feel. That’s the thing about post-rock. It doesn’t tell you what you should be feeling, it lets you make up your own mind.

Finally, if all of that sounds a bit negative, please let me be clear. Final Quiet may not be as immediately joyful as what has gone before, but it’s every bit as good. It’s just differently brilliant.

FOOTNOTES;
1. Yes, I know. I’ve heard ALL the jokes. I am still not ashamed.
2. I know hee-haw about classical music. Perhaps I should give it a go…
3. Clearly I know more about anatomy than about classical music. Not especially helpful, but it’s good to know which bits are being affected.
4. Some credit here for some nifty work from George on bass. Cheers, George.