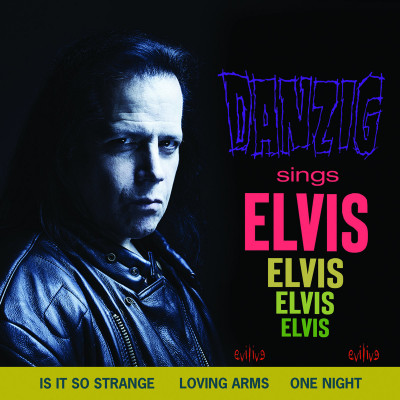 At first glance, this may seem a strange concept. After a pause for thought however, Glenn Danzig putting out an album of Elvis Presley covers makes perfect sense, the only raised eyebrows should come from wondering why it took so long to happen.  Listening back to earlier Misfits output (in particular, the tracks which appeared most prominently on Legacy of Brutality) it’s obvious that the band’s frontman and songwriter’s musical influences came from somewhere further back than most other punk bands were embracing at the time, ‘Trouble’ was an early Danzig live staple and press from way back have dubbed him the “Evil Elvis” for a few decades.

So why now? “Why not?” is probably the best response to this, as with Sings Elvis, Glenn takes us through 14 deeper than usual cuts of the King’s back catalogue, performed here in a pleasingly back-to-basics manner. Presented without pomp, this collection takes the listener back to the uncharted early days of rock ‘n’ roll, as well as the early days of Glenn’s own musical output. The lip might take a bit more conscious effort to curl and the hips might squeak when they swivel these days, but it’s all still there and still sounds good.

Stripped back to voice, guitar and very little else, this is raw almost to the point of primordial. The voice is, of course, the voice – very little has changed over the years and Danzig switches between croon and howl pretty much as well as he always has, although occasionally there is a wish that this collection had been done around the time he absolutely belted out ‘You & Me’ for the Less Than Zero movie, but then again that was then and this is now, and now feels like a better time to be bringing this out. This is probably most apparent during ‘Like a Baby’ and the raucous ‘Baby Let’s Play House’, but the sheer amount of fun expressed during these songs negates the need for over-critical pondering.

The backing feels more street-corner skiffle than film soundtrack polish, aided by the guitar’s proto-distortion bringing a dangerous Link Wray edge to match Glenn’s own smooth vocal snarl, all leather jackets and flick-knives even during the more tender moments such as ‘Love Me’. Listeners will no doubt gravitate to the more well-known tracks such as ‘Fever’ and ‘Always on My Mind’, and with good reason as they represent an excellent marriage between the two singers’ worlds, and having these two crowd-pleasers sandwiching the down and dirty blues of ‘When it Rains it Really Pours’ it really brings it home that not only is this a really well-thought-out collection but also a reminder that Presley was at the edge of something new and dangerous way back then.

This is more a fun addition to Danzig’s extensive catalogue and a tip of the hat to his idol than something that anyone should be getting particularly serious or uptight about. It’s a labour of love evident in the song choices and performance and if it sometimes feels a bit indulgent, then good – as it probably is and it’s in no way detrimental for it. And frankly, if you’ve ever wanted to hear Glenn Danzig singing about his pocketful of rainbows, then you’ve come to the right place.