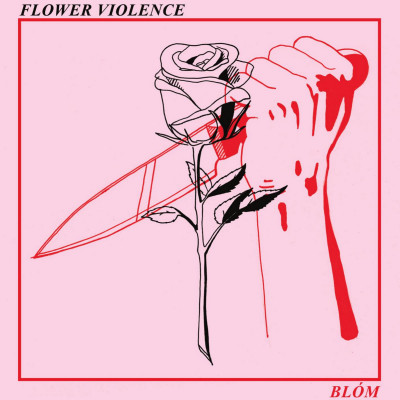 After a long time of wondering whatever happened to Tough Tits, finally, a new project from the Geordie noise-makers has arrived, please join me in a silent applause for Blóm, whose debut album Flower Violence is set to be released on 1st May 2020 with Box Records.

The first thing that strikes me about ‘Audrey’ is that the guitar sounds like it’s fucking melting on top of the bass, it’s kind of reminiscent of the squealing recoil guitars in White Zombie’s ‘More Human Than Human’. Although, the more obvious comparison is to say that it sounds like Melt-Banana with Alice Glass on vocals or Charismatic Megafauna or Jack Off Jill or whatever else. But to be honest that comparison has muddied my attempts to write this review a few times, in the sense that every time I think of comparing the band to other bands, I wonder if I’m becoming more like one of these pea-brained dudes that uses the term female-fronted like it’s a genre. For that reason, I’m gonna eschew any further comparisons going forward and hope you guys get the picture from my attempts at “descriptive writing” and what is likely to become a political rant about diversity.

One thing that becomes very clear from ‘Audrey’ and ‘Meat’ is that this album is one that moves a mile a minute. The drums are constantly pounding away, the vocals are bellowing constantly, often with welcome focus on issues of equality and diversity. I can’t make out a lot of the words to be honest, but from what I can decipher ‘Meat’ is about sexual objectification, presumably aimed at the kind of lecherous dudes you’d find ogling the band at gigs. There’s a sense of sloganeering in the words I can make out, in that sense there’s a punk edge to the music, as well as in the hard and fast style, but musically, it’s a lot more interesting than most punk music. An example of such sloganeering can be found in ‘God’ with lyrics like “We didn’t want it, we didn’t need it, we didn’t ask for it” which I hope is a rejection of existence, the song also has some fucking amazing drumming in it.

‘Ubermensch’ immediately stands out as welcome change of pace and tone; after three fast and very trebly tracks, it’s nice to have a focus on the bass and the lower-end in general and to just slow things down. I think the band should experiment with the vocals on the next album, there’s a strong case for exploring other registers and effects and such ‘cause as much as these vocals work they’re more or less the same the whole time. This is quite possibly my favourite track on the album because each facet of the band’s sound is given some time to shine and we see them sonically expand outwards as well.

‘Be Kind’ closes the album, it reminds me of a book I read called ‘On Kindness’ which was essentially about how altruism could alleviate the pitfalls of society; that moral and considerate behaviour could prevent us from creating further defective generations of abused and abusers. Of those who hurt and those who are hurt. We would instead be those who are happy and those who offer happiness, those who are loved and those who love, those who are kind and those who propagate kindness. It’s strange that Flower Violence offers so many wholesome and progressive thematics and yet, charges them at the listener through the teeth of a chainsaw. I feel like it’s emblematic of a victim’s yearning for justice in a world that only seems to seek that which is fair and just as a result of being mistreated and met with cruelty in place of kindness.

The album’s feminist themes and rancour may have some men rolling their eyes and yet, they don’t understand how frustrating it is for women to not be able to get public transport, go to the shop, have a drink at a bar or run through a park without being catcalled or harassed by some fucking creep. Sadly the reality of its frequency only usually descends on the cis-gendered man when they have a girlfriend. The fact of the matter is women are treated as objects with an alarming regularity and issues of diversity are still very much pertinent in 2020 – we are not yet all treated equally and the mindset of society is not yet as forward facing as some might wrongly believe it to be.

Whilst a male reader might find irritating to be regularly confronted with an issue that you are not guilty of or that you have progressed passed there are a lot of people who still behave this way. Whilst the right wing of society is growing ever more radical and conservative, we in our arts and crafts bubble often neglect to look at the centre’s attitudes to anything and similarly at the left wing as a whole. There are many issues of what is considered to be the status quo colliding with what others are in their nature; even on the left-wing there is prejudice against trans-women and sex-workers in Feminism and moreover, there’s a lot of prejudice and judgment on the left against polyamory and polysexuality. Even in some corners of the LGBTQIA+ community, there’s stigmas against bisexuals and pansexuals and asexuals and demisexuals and the non-binary. Everyone wants to be able to fit everyone else into little boxes.

There’s kink-shaming and elitism and imperiousness and self-righteousness in the most “progressive” people, perhaps the most damaging bigotry we have left to face is tribalism, the good and the bad. Bad ideas and bad logic does not make bad people. Bad behaviour and bad intentions doesn’t mean that people can’t change. Nobody’s perfect. Stigmatising mental illnesses and personality disorders and trauma and abusive up-bringings, you blame people for their pathologies and things they can’t choose, but you can sleep easy at night; ‘cause you’re the good person and they’re bad. You may have came into contact with ouroboros; the snake eating itself. That’s society, desperate for validation and vindication; never fully grown, always uncertain. Judge, jury and executioner. The most mature thing a person can do is change. Art is Resistance. You can help voice the need for change and be a part of it. Maybe, we just need to learn to ‘Be Kind’ before we eat each other alive.

Flower Violence is a relentless debut for what is clearly a very formidable new band, I look forward to seeing Blóm experiment with their sound in their next release and in their live performances.